There is no film in recent cinema history that has been built up to such an extreme as Tenet. Christopher Nolan’s much-anticipated offering to the spy genre has been touted as nothing less than the savior of cinemas. Despite a global pandemic that continues to kill thousands, this, we’ve been told, is the film that will reboot the struggling Hollywood economy and urge the people back into theaters.

That’s a lot to live up to, so it should come as no surprise that Tenet both does and does not meet its lofty expectations. It is, like all of Nolan’s canon, built around an intriguing and complicated premise, one that considers how time itself could be weaponized and what sort of threat that might pose to humanity. It’s huge and loud and filled with spectacular set pieces, which undeniably look their best in 70 mm projected on an immense IMAX screen. Its characters, led by John David Washington’s inexplicably named operative “The Protagonist,” traverse the globe, from Oslo to the Amalfi Coast to India, and the action sequences, which emerge at regular intervals, don’t disappoint. Aesthetically—accompanied by Ludwig Göransson’s aggressively throbbing score—Tenet is the cinematic spectacle you’ve imagined.

The plot, however, is where things start to falter. Tenet is as convoluted—if not more so—than Inception or Interstellar, and its tangled narrative occasionally fails to completely unknot itself (although that may be the point). As the story opens, Nolan drops the audience into Kiev, where Washington is an anti-terror agent who attempts to halt an attack on the National Opera House. He’s captured and tortured, but manages to take his CIA-issued suicide pill. Instead of dying, Washington wakes up in a hospital where he’s told the pill was a test and he is now tasked with helping to prevent an impending Cold War.

His mission, to stop “something worse” than nuclear holocaust, begins in a lab, where a scientist (Clémence Poésy) explains the appearance of inverted weapons, which have arrived from the future and begun to populate the arms trade. These weapons, notably the bullets, move backward through time—part of a mystery that the Protagonist has to unravel with the help of Robert Pattinson’s Neil, another agent with more knowledge than he initially lets on. Elizabeth Debicki plays the estranged, beaten-up wife of spiteful arms dealer Andrei Sator, embodied by a woefully miscast Kenneth Branagh. Nolan too often makes Debicki his victim. Echoing her character in The Night Manager, playing the villain’s downtrodden spouse doesn’t give Debicki her due (and Tenet, like most Nolan films, doesn’t come close to passing the Bechdel Test).

All this adds up to several heist scenes, one involving the infamously crashed Boeing 747, and an exciting car chase sequence that puts other spy movies to shame. The action is big, with innovative fight scenes (some of which had to be choreographed backwards), and the movie itself is truly immersive, even if you don’t always know what’s going on. But it’s one thing to explain what Tenet is about and another to consider its meaning. In some ways, the movie is a meditation on time—like a lot of Nolan’s work—and it asks questions about whether time is as fixed as we may believe. Does time move forward or do we move forward through time? Could time be manipulated in a way that allows us to control the future or the past?

These are interesting questions, but Tenet never dives below the surface to answer them. It’s a lot of flash and bang and very little depth. In a year that feels both endless and unbelievably quick, Tenet could have been an opportunity for us to reflect on how we traverse time and space. Its ending, which leaves behind a few confusing loose ends, does pause to suggest that our journeys might not be linear—and that life would be more interesting if that were the case.

It’s never really clear what “Tenet” is—Washington is told that it’s a word and gesture that will “open some of the right doors but some of the wrong ones too”—but it doesn’t really matter. As he did in Inception, Nolan has created an entire world where certain things are true simply because he’s made them so. Futuristic bullets that reverse into a gun from the wall, known laws of physics that can be inverted, car chases that happen in two directions at once. These are all exciting ideas even when delivered in a potentially confusing film, and Nolan is the sort of filmmaker who captures our imaginations for what could be possible, which is something that feels important right now. We need moments of hope and distraction, to speculate on realities that exist far away from our own.

It’s a deeply personal decision whether walking back into a movie theater during a global pandemic is the right thing to do. For many, it won’t be. And that’s OK. There’s nothing in Tenet that won’t still be exciting or enjoyable in a few months when the movie arrives on VOD, and no one should feel pressured to see it in its opening weekend. For those who do, it’s 150 minutes of solace, a reminder that time is impermanent and this too shall pass.

Tenet debuts in Europe on Wednesday, August 26 and in select U.S. markets on Thursday, September 3. 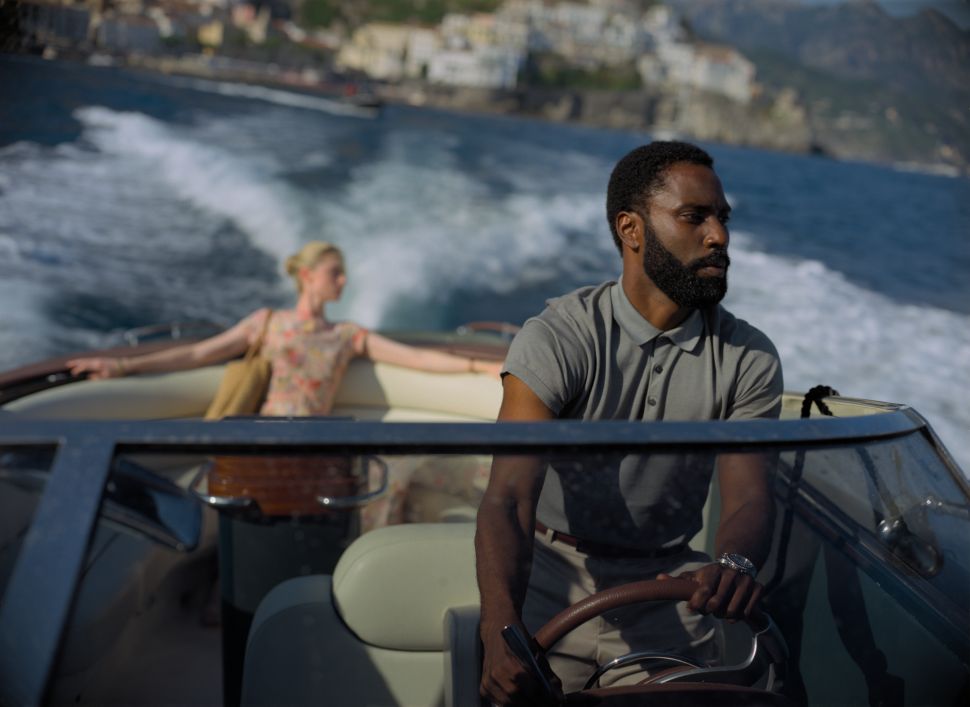