This review contains no major spoilers for Season 2 of The Boys.

Amazon’s dark and gritty superhero series The Boys has always reminded me of the board game Monopoly. It’s fun and enjoyable in spurts, but also limited and maddeningly frustrating. At a certain point, you’re always one dice roll away from catastrophe. Such is the case for the show, which vacillates between reveling in its graphic cruelty to the point of disgust and revitalizing the overly saturated superhero genre. You never know which you’re going to get from scene-to-scene as if it’s all the twisted luck of the draw.

Based on the comic of the same name, The Boys is an irreverent take on what happens when superheroes—who are as popular as celebrities, as influential as politicians and as revered as gods—abuse their superpowers rather than use them for good. Season 1, alternately off-putting and engaging, embraced the idea that absolute power corrupts absolutely.

The Boys mutilates the very idea of idealism, hacks away at the notion of heroics. In this world, the superhero isn’t an aspirational title. It’s a product that has been commodified, quantified, pre-packaged and marketed to the masses. Those are the ideas that bring the most value to The Boys. Those are the elements carried over into Season 2, which revolves around a push from the vile Vought (the multi-billion dollar conglomerate that manages these superheroes and covers up all of their dirty secrets) to get supers into National Defense, that are most compelling. That’s the good stuff.

Season 2 takes a bit of time to reach cruising altitude. But the changing dynamic between between newcomer Stormfront (Aya Cash) and our secretly evil Superman stand-in Homelander (Anthony Starr) is a strong subplot that shapes the latter half of the season. Along the way, many of the parallels The Boys draws to the real world work. Comparison points to modern public figures manipulating public opinion through propaganda and self-serving cult-like religious factions taking advantage of its members more or less hit their marks. Others, such as painting a potential supervillain attack as analogous to a school shooting, leave you cringing.

The Boys admirably wants to deconstruct the superhero, a welcomed approach in an era of mass-produced and homogenized capes-and-cowl content ranging from the MCU, DCEU, Arrowverse and beyond. Hell, Saturday’s DC FanDome just introduced the third big screen iteration of Batman in the last eight years. Season 2 is an attempt to re-contextualize modern ethical heroics and our relationship to publicly anointed figures. It also dispels any romantic notions we have about the agendas of powerful institutional bodies such as big business, government and religions; pillars of “civilized” society that are meant to provide security and structure. Instead, they sow chaos. The Boys is bereft of hope (outside of Jack Quaid’s puppy-like Hughie), which is a surprisingly effective take.

But the show also can’t help but get in its own way. Meta jokes featuring a brief cameo from Seth Rogen (who serves as a real-life executive producer) and cracks at modern pop culture (fictitious film “Dawn of the Seven” puts Zack Snyder in its crosshairs) score laughs. But they also prevent The Boys from being as boldly anachronistic as it likes to think it is. Too many wink-wink jokes leave Season 2 half a degree removed from Deadpool and not nearly as subversive.

Nothing changes in this world and the same holds true for our characters. They continue to make the same mistakes over and over and not in the same way that Tony Soprano’s cyclical behavior became the backbone of a series and a valuable piece of commentary in its own right. In a very literal reading, Karl Urban’s swaggering Billy Butcher fails to deliver on his promises every single time across both seasons. Yet the plot demands that he still wheel and deal with various powerful factions and shadowy figures who trust him despite his abysmal track record. It’s less character development and more plot mechanics papered over with side-eyed emotion. Then there’s the clear pleasure The Boys takes in its own pain, celebrating its gory graphicness far more than even Game of Thrones dared to do. This may not be the most eloquent nugget of critical thinking but: yuck.

Ten minutes into a game of Monopoly and you’ll still find everyone enjoying the glacial advance of capitalistic conquest. Half an hour later, you might be ready to shove that hotel down your best friend’s throat. Likewise, The Boys delights as a stark departure from the expected norms of comic book content right up until the point it doesn’t. Highly entertaining but grossly flawed, The Boys envisions itself as the bad boy of superhero stories. To a degree, it is. But let’s not act as if its the long-awaited mash-up of Shakespeare and Stan Lee.

The first three episodes of The Boys will debut on Amazon Prime Video September 4. 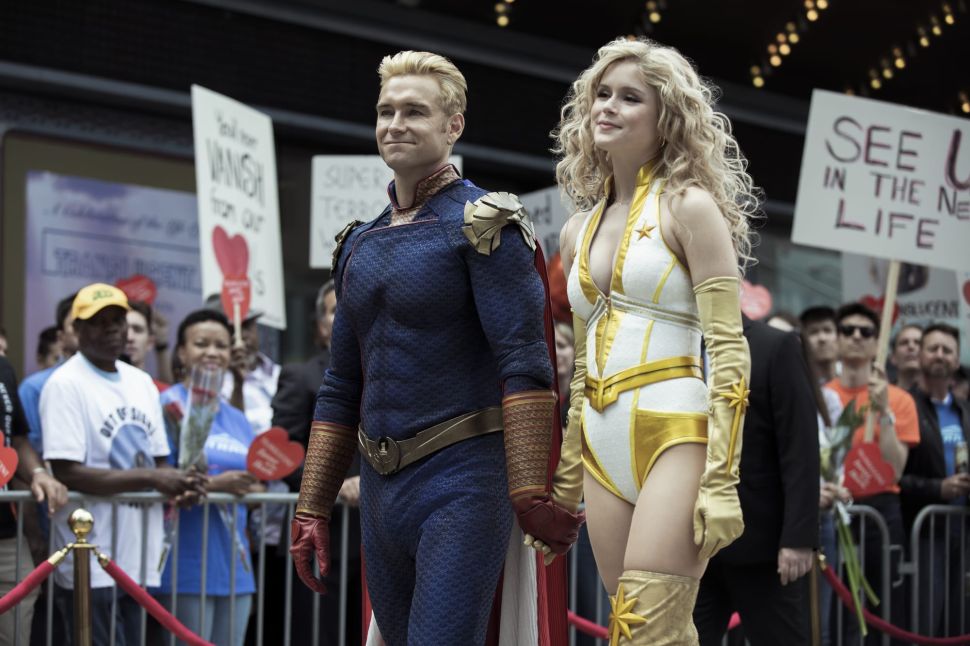