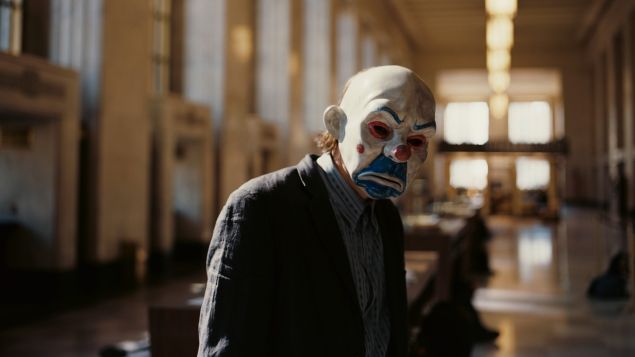 From the opening scene of The Dark Knight. Warner Bros.

To a viewer, it can sometimes feel as if Christopher Nolan perceives time like one of Vonnegut’s Tralfamadorians, the aliens of the novel Slaughterhouse-Five who experienced all of existence simultaneously. Nolan’s not omnipotent—though some of his more ardent fans may disagree—but as of late, he’s been intent on contriving new methods of popcorn entertainment beyond the shackles of narrative linearity. The last few pictures have seen him grow obsessed with the collapsing and extending of time to create elaborate action set pieces: the literal time-travel of Interstellar, the temporal dilation of Inception, the varied pacings of Dunkirk.

He’s developed a fetish for synchronization, a preoccupation that began in earnest in 2008 with The Dark Knight. The second installment in the pivotal blockbuster franchise marked the end of Nolan’s interest in making anything less than titanically scaled films, its best passages showcase a flair for meticulous execution that he’s been repeatedly inflecting and inflating ever since. He did this least-figuratively in his finest outing with the Batman, which uses actual stopwatch coordination instead of more abstract metaphysical hooey to assemble the intricate moments audiences prize in his work. Most directors format a big stunt sequence like a series of dominos that fall one after the other, with a straightforward motion captured from multiple angles. Nolan wants to shoot the dominos, and a ball rolling through a Rube Goldberg contraption, and a toy car heading for a jump ramp, and he wants them all to land on the exact same spot.

Joker claims that he’s not a guy with “a plan,” but his terroristic pranks involve multiple locations with events coinciding down to the millisecond.

REVIEW: The Flash and Bang of Christopher Nolan’s ‘Tenet’

As portrayed by a seething, wanton Heath Ledger, the clown crime lord Joker claims that he’s not a guy with “a plan.” Fine, but even he cannot deny that he certainly believes in foresight; the Joker’s terroristic pranks involve multiple locations with events coinciding down to the millisecond, which result in thrilling montages of chaos erupting across Gotham. The opening bank stickup situates a gang of disposable toughs at different points around the facility, from the roof to the main floor to the vault entrance. Each crook must do their job promptly and perfectly so that the next one can do theirs, only to be killed once they’ve outlived their usefulness. The paramount importance of timing extends to this scene’s comedy, too, as the punch line arrives when the getaway bus driver busts through the wall to take out the last goon right on cue.

Later on, Nolan ups the ante as the Joker makes good on his threat to dispose of three important public figures. He stages a trio of assassination attempts in concert, only two of them successful. A pair of corrupt cops escort a judge from her home to her explosive-strapped car, the police commissioner drinks from a poisoned glass of whiskey in his office and at a private fundraiser in Bruce Wayne’s penthouse, the Joker and his hit squad personally see to the murder of Harvey Dent. To pull this offensive off, everything has to happen before anyone can warn anyone else, and so all three kills climax in harmony under the camera’s watchful eye. Dent survives, but he’s far from safe, kidnapped later on in another ploy that demands law enforcement be in at least two places at the same time—a superpower only we, the viewer, possess.

Nolan favors heist pictures (and heist-adjacent pictures such as this, in which a team undertakes a comparably complex operation) because he likes it when everything happens at once. The Soviet film pioneer Sergei Eisenstein famously theorized a cinematic effect layering sequential elements “not next to the other, but on top of one another,” which gives the feel of something dazzlingly complex through stylized editing.

By refining this concept with synchronization, Nolan separates himself from his USSR predecessors and everyone else who’s ever experimented with cross-cutting. He and editor Lee Smith (The Dark Knight, Inception, The Dark Knight Rises, Interstellar, Dunkirk) prefer to expand a single instant instead of eliminating the space between them, orienting all the commotion around a shared point of convergence. For the notoriously obsessive auteur, it is not enough for various strands of plot to overlap. When they’re in active cooperation with one another, the catharsis hits harder. There’s an argument to be made that Nolan has spent the latter half of his career grasping for the transcendence of The Godfather’s climactic baptism of vengeance, with Michael Corleone baptizing his child while his enemies’ blood gets spilled all around him.

It’s easy to project a metaphor of Nolan’s personal artistry onto the bank jobs, prison breaks, and synced-up bump-offs of The Dark Knight. The masterminds behind these daring missions approach their work the same way a director maps out a big day on set, organizing a team to fulfill their individual functions right when he starts rolling. Nolan replicates the tension and pressure of his pricey, technically advanced shoots through the life-or-death villainy and heroics onscreen—only he gets the benefit of a take two. 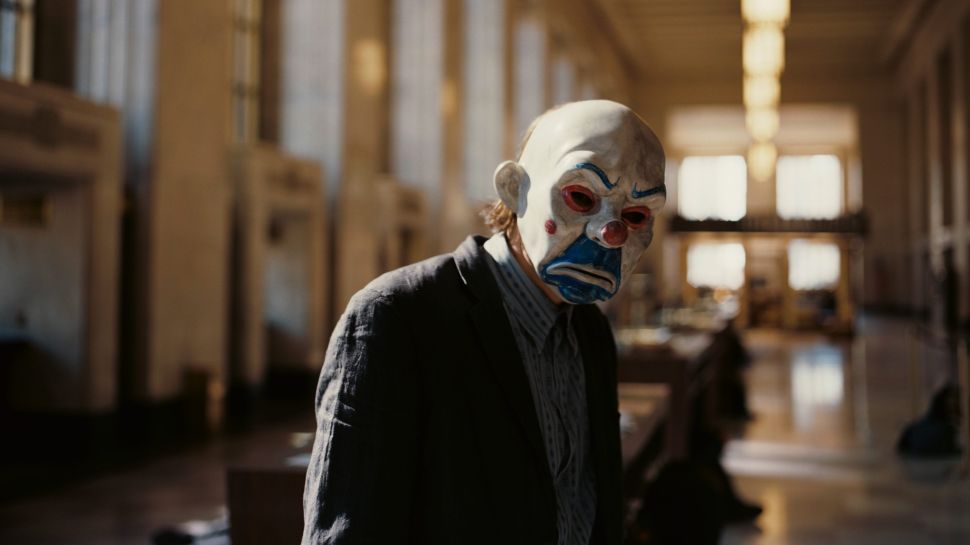