After the streaming success of Avatar: The Last Airbender this summer, Netflix recently revealed that its sequel, The Legend of Korra, will be available on their platform starting August 14. The announcement came shortly after Avatar left the Top 10 most-watched chart, breaking Ozark’s 57-day record by staying on the list for 60 days.

The story picks up 70 years after Avatar: The Last Airbender’s Hundred Years War, Korra, the new Avatar, is born into the role as humanity’s spiritual champion. The first show’s emphasis on the spirituality of bending is replaced in The Legend of Korra by rapid technological advancement, so the shows’ approaches and themes differ. However, the core premise and goals of the two shows remain the same. The creators incorporated sociopolitical commentary into Korra’s plot as they did with Avatar’s, and using older main characters allowed them to make bolder and more nuanced decisions with the story.

The road to Korra from Avatar was not always a straight line, however. Here’s what you should know about the show’s development before you dig into its run on Netflix.

In an interview, animation director Yoo Jae-myun revealed that Nickelodeon wasn’t sold on the series because of the female protagonist. “The production was suspended just because the protagonist was a girl,” he said. “To compare this situation to a movie production, it’s as if the lead actor has already been cast, but the production agency decides to stop filming because they don’t approve of the actor.” Because of the creators and the animation studio’s persistence, execs at Nickelodeon changed their minds. “We wouldn’t take no for an answer and we finally got their approval,” said Yoo.

The creators of Avatar and Korra, Bryan Konietzko and Michael Dante DiMartino, admitted that they often have a difficult time coming up with character names. They needed to get the name right, and for a lead character, it has to be one with higher recall. They even looked up baby name lists for anything that stands out. However, it appears that inspiration comes from the places you least expect them to be. When they met a dog named Cora in Canada, they immediately liked the name. Having tried plenty of K-name variations fit for a Tribe member, they finally landed on “Korra.”

Back in 2008, Seychelle Gabriel originally auditioned for the role of Katara in the infamously panned live-action film. After radio silence for about six months, she got a callback for the role of Princess Yue. Eventually, director M. Night Shyamalan himself contacted telling her to say she landed the role. This whirlwind of events led her to her second feature film in 2010—and her Avatar journey didn’t stop there. With Korra, she auditioned for the title lead character, but ended up being cast as Asami’s voice actor instead, her first voice acting role.

Korra‘s Mako was named after Mako Iwamatsu, who voiced Iroh in the first two seasons of Avatar

Mako Iwamatsu voiced the Avatar fan favorite Uncle Iroh until he died from esophageal cancer in 2006. The show honored him in the episode “The Tales of Ba Sing Se” with a dedication at the end of Iroh’s segment in the episode. Bryan Konietzko confirmed that they named the character Mako after him in the 2011 San Diego Comic-Con (SDCC) panel for the show.

The concept of pro-bending, the beloved sports sensation in the series, is loosely based on pro-wrestling

In Korra, pro-bending is a well-loved sport that brings members of different nations together. Benders form mixed-gender teams of three where they can compete against other teams. They have team names and costumes, and the goal is to push people out of the circle and the arena itself. The matches attract a big audience, but those who cannot attend can tune in to the radio where it is announced live. The arena and the rules of the game have similar qualities to pro-wrestling.

The concept of Avatar heavily drew inspiration from Asian influences. With Korra, the creators based the steampunk metropolis idea from different sources as well. Aside from American and European architecture design, they also incorporated the Canadian Rockies for the mountains surrounding the city. They thought about the concept of “Manhattan in Asia” and ran off with the idea.

The show’s antagonist needed to be a striking contrast from Avatar’s Fire Lord Ozai. He was already a powerful and influential ruler of a nation, but he wanted to gain more power. Amon in Korra was a different villain altogether. He tempted other people with his ideology and convinced them it was the correct way of thinking. “You know, instead of the people at the top trying to take over the whole world, it was the people at the bottom trying to rise up,” Konietzko said.

The show was taken off the air mid-season to shift to a digital platform, Nick.com

The latter part of Book 3 and the entirety of Book 4 did not air on Nickelodeon. In the 2014 SDCC panel, the creators said that, in terms of audience, “the numbers in the digital streaming greatly outweighed the channel.” Due to declining TV ratings, Nickelodeon shifted the show’s distribution mid-season to its website, Nick.com, where it proved to be a huge success. Since the Book 2 finale was Nick.com’s biggest online event, moving to digital wasn’t entirely surprising.

Bryan Konietzko prides himself as the first Korrasami shipper

In his personal blog, Konietzko wrote that he holds bragging rights for being the first Korrasami shipper. (“Korrasami,” of course, refers to the show’s same-sex relationship.) He already entertained the idea around the writer’s room when they were writing Book 1. “At first we didn’t give it much weight, not because we think same-sex relationships are a joke, but because we never assumed it was something we would ever get away with depicting on an animated show for a kids network in this day and age, or at least in 2010,” he said.

Similar to ATLA, the story canonically continues in the comics

So far, Avatar’s story continues with six graphic novel trilogies. They bridge the gap between the two television series, giving readers enough background and context about the major changes. Korra has its own graphic novel trilogies as well. Quite recently, there was a live reading of the first installment of the first trilogy, “Turf Wars Part One,” where Janet Varney and Seychelle Gabriel reprised their roles as Korra and Asami respectively.

The Legend of Korra will be available to stream in full on Netflix starting August 14. 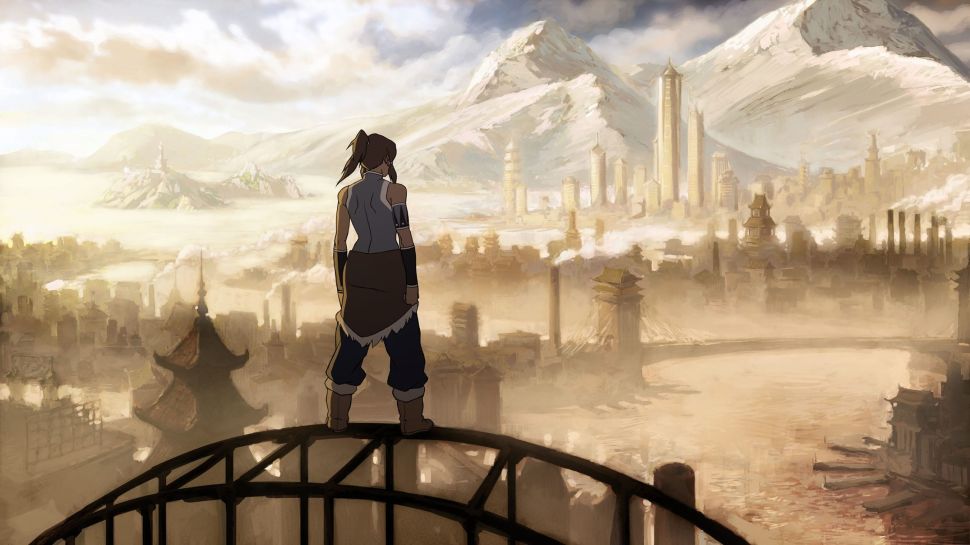