There is no denying how much Michael Dante DiMartino and Bryan Konietzko’s Avatar: The Last Airbender owes to the films of Hayao Miyazaki. A big part of that show was spent exploring the effect war has on rural areas, especially how nature and culture change in the face of war-fueled industrial progress. From how forest spirit Hei Bai started attacking nearby villagers after the destruction of its home to the protectiveness of the eponymous spirit seen in the episode “The Painted Lady”—both of which serve as a homage to Princess Mononoke—Avatar has long been interested in the same themes of industrialization’s damage to nature that Miyazaki explored in his films.

When it comes to The Legend of Korra, the sequel series takes these ideas to bigger proportions, exploring how rapid urbanization and progress come at the expense of tradition, spirituality and nature. Now that Korra is available on Netflix for a wide audience to enjoy for the first time or to re-discover, it’s time to explore how the show became one of the best translations of Studio Ghibli’s themes in Western animated television.

The first episode of The Legend of Korra makes it clear that the world has changed tremendously in the 70 years since the end of the previous show. Amicable negotiations between the four Nations and the formation of the United Republic of Nations kick-started an industrial revolution in the world that resulted in huge technological progress like the invention of the telegraph, the radio, automobiles and even magnetic rail lines.

SEE ALSO: Joke’s on You: Watching Women Break Their Chains in Film

With this industrial revolution comes a change in lifestyle and culture. The second season focuses on the Southern Tribe and how its social and economic resurgence in modern times came at the expense of the spirituality that long defined the tribe’s culture. This, in turn, caused dark spirits to attack the tribesmen because the tribe has become unbalanced with nature. Though this mostly was used as an excuse by the character of Unalaq in order to trick the Avatar into bringing back an ancient evil spirit, Korra argues that the world had indeed strayed away from its spirituality and lost balance.

Where The Last Airbender focused on pollution and how it damaged nature, The Legend of Korra focuses on grander ideas about ideology and culture, and how traditions change in the face of technological progress. In the two-part episode “Beginnings,” the show tells the story of the first Avatar, Wan. In the episode, Wan decides to fight for spirits and become the bridge between them and humans after witnessing groups of humans expand their territory by destroying the spirit’s habitat and taking over their land. Equipped with the power to bend the elements, humans start expanding from within their Lion Turtle cities, and this led to deforestation in the spirit world.

“Beginnings” brings to mind the movies of Isao Takahata like Pom Poko, which deals with the delicate balance between urban development and nature, and how nature (in this case Japanese raccoon dogs) is forced to fight back when their habitat is being threatened. That movie even has one of the creatures turn to the viewer and directly ask us to protect nature before it’s too late. In Season Three, after Korra leaves the spirit worlds open and connects the two worlds, spirit vines start growing aggressively and destructively throughout Republic City, as nature starts fighting back to reclaim what was lost. Though this causes great discomfort and anger to the citizens whose homes are invaded by vines, by the end of the show it is made clear that this is the path toward restoring balance in the world by reuniting both worlds.

In Season Four, the fascist dictator Kuvira develops a superweapon powered by spirit vines and orders her troops to start harvesting the vines until there are none left. This results in the spirit vines fighting back, not just against the troops, but all the way across the world in Republic City, where the vines start violently attacking citizens. Though the show doesn’t sympathize with Kuvira’s harvesting of the vines, it does find sympathy in the humans who left the Lion Turtles to live in the spirit wilds back in Wan’s time. Sure, they were stealing the home of the spirits, but they were escaping a tyrannical rule and social inequality and looking for a better home. Likewise, in Hayao Miyazaki’s Princess Mononoke, we see the struggle between a flourishing town carving further into its nearby forest, and the spirits whose home is being destroyed who are forced to retaliate. We start to think we should root against the town, before we then see its inhabitants are mostly former slaves, lepers and prostitutes who finally found a place of empowerment.

The show doesn’t diminish the loss of the past in the face of progress to a fight against nature, but also to the loss of traditions that previously defined the world. Now that it’s peacetime, characters are more inclined to use their bending to become athletes than warriors or masters. In the original Avatar, bending was considered a respected art form akin to martial art, with grandmasters being revered across the world. Bending was used to aid technology, but in The Legend of Korra, bending has lost most of its spiritual nature. Benders now use their powers in petty fights, to commit crimes, fulfill everyday jobs, and even in the arena sport of pro-bending, a new and extremely popular sport that has two teams of benders fight in an arena, boxing-style.

Korra doesn’t necessarily argue that any of this is bad, however. Cities expand, traditions evolve and industrial progress will always clash with nature, but that just means we should fight harder to maintain balance. When it comes to translating the themes that made Studio Ghibli into an animation powerhouse for Western audiences, few modern shows do it as well as The Legend of Korra.

The Legend of Korra is streaming in full on Netflix. 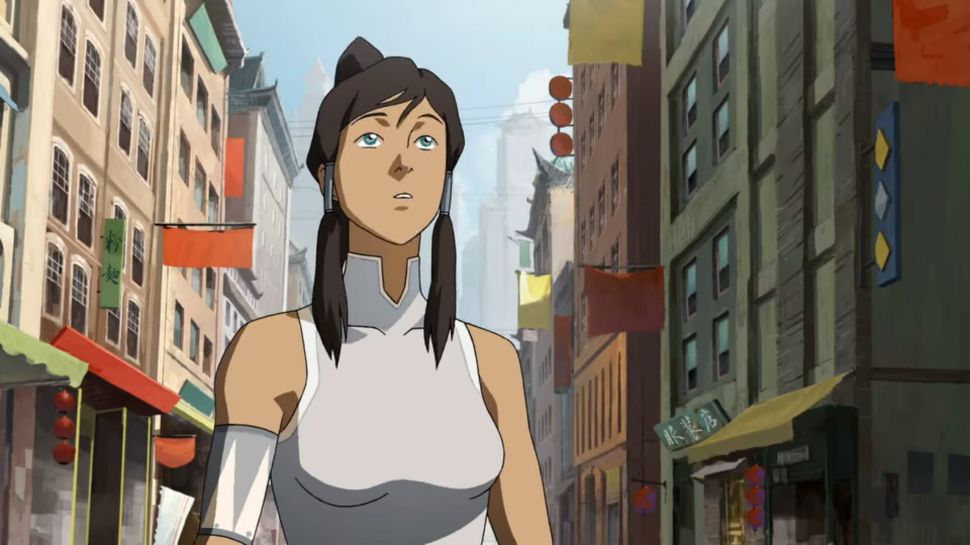