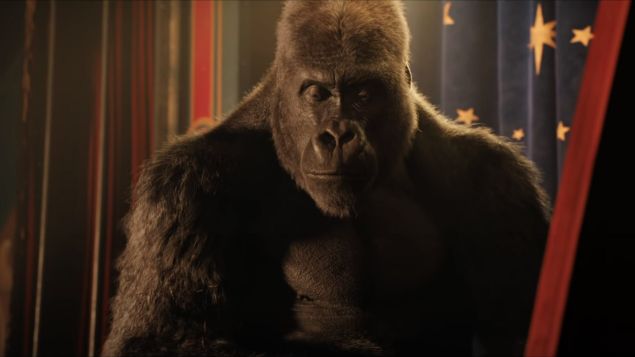 The titular gorilla voiced by Sam Rockwell in The One and Only Ivan, which arrives on Disney+ this week. Disney Plus

The latest film to take advantage of the relative ease of creating photorealistic animals on computers as well as the eagerness of big name actors to lend their voices to such creatures, The One and Only Ivan tells the story of a gorilla in a small-time mall attraction looking to find a more appropriate place to spend his senior years.

The story is both easy to follow and relate to. It serves as an ideal platform for the film’s big-hearted nature, which it conveys with the large and emotive eyes of the CGI critters. It’s also the kind of storyline that gives quite a bit of cover to the film’s lesser attributes—namely its general small-mindedness and squishy moral logic.

But it also is a more than apt parable for the movie itself, which in pre-COVID times was intended as a late summer theatrical release before Disney pulled it and made the film part of the cornucopia of middling fare that pours forth from its streaming service, Disney+. So while The One and Only Ivan is nowhere near as singular as its title might suggest, at least it has found its perfect home.

For those of us who still tend to think of Sam Rockwell as the impish presence in indie movies, it might take a moment to adjust to hearing him voice Ivan, a grizzled gorilla who is a longtime veteran of the theater. The 400-pound silverback seems closer in disposition to Clint Eastwood, Rockwell’s director in last year’s Richard Jewell, than to the Davy Crockett–cap wearing Kid he so fully embodied in Tom DiCillo’s 1996 film Box of Moonlight.

Ivan is the headliner (“headliner” being a term that Mike White’s script not only feels the need to define, but also repeats so many times that using it in a drinking game for the movie might prove deadly) of an animal-centered circus performed in an all-but-dead mall whose other main attractions include a video arcade and a bowling alley.

Bryan Cranston’s Mack is the circus owner and ringmaster. A veritable non-entity in K.A. Applegate’s Newberry Award-winning novel, Mack is front and center in the film version. However, White’s script never bothers to imbue him with a personality or motivation; he’s more just the embodiment of an amiable energy that can shade a bit dark when he is confronted with the realities of his dire financial situation. (Turns out, shockingly, that mall-based circuses are not a great investment.)

Mack is not the only character running at an identity deficit. None of the secondary animals in his act are attended to with much care or curiosity by the filmmakers either. These include a neurotic seal voiced by screenwriter White, a baseball-hitting chicken voiced by Chaka Khan, and a stray dog that is Ivan’s best buddy and speaks, as stray dogs tend to, in the voice of Danny DeVito.

The most spirited contributions to the film come from the outfit’s two youngest members. These include The Florida Project’s Brooklynn Prince, who lends a bit of her ineffable spark to Ruby, the baby elephant whose addition to Mack’s menagerie threatens Ivan’s top of the bill status, and Ariana Greenblatt, a veteran of Disney Channel sitcoms, who adds a palpable sense of wonder to Julia, the caretaker’s daughter who encourages Ivan’s artistic pursuits by giving him crayons and finger paints.

While the kids are terrific, The One and Only Ivan—which was directed by Thea Sharrock (2016’s Me Before You)—has a bit of a problem when it comes to women of the adult variety. The human kind barely register: Julia has a never-pictured mother with an unspecified illness while Mack has a never-named former girlfriend who splits on him when an adolescent Ivan starts acting up.

As for the animals, aside from the chicken and a preening poodle voiced by Helen Mirren that exists chiefly to confirm the prissy stereotypes many carry for that breed of dog, the film’s primary attempt at having a prominent female presence is Stella, an aged and sickly elephant. Angelina Jolie, who also was a producer on the film, voices her.

In a movie that runneth over with squandered talent, this one hurts the most. After Disney seemingly had no idea what to do with her epic strangeness in the last Maleficent movie, this time out it is as if the Mouse House has chosen to drain Jolie of her outsized power and energy all together. She sounds sage, exhausted and all-too-ready to sacrifice herself in service of the story.

Basically, she is just like a lot of the beleaguered and housebound parents who will be wearily punching up The One and Only Ivan this weekend and in the weeks to come—a welcome alternative to, say, an umpteenth viewing of a Toy Story movie. It may not be that good, but perhaps it’s good enough to help get us through another day of our own ill-fitting captivity.

The One and Only Ivan hits Disney+ on Friday, August 21. 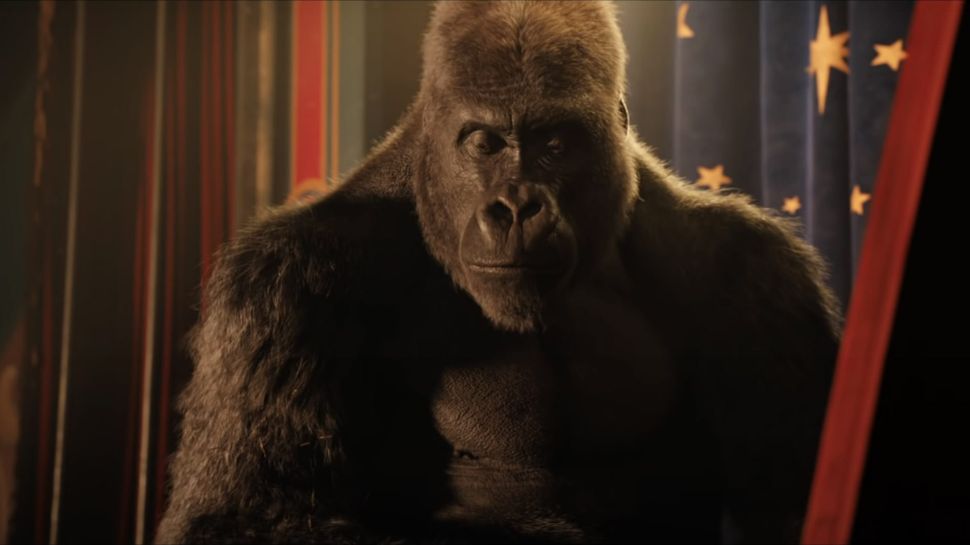