For any devoted fan of art and art museums, it’s a worst-case nightmare scenario: you’re wandering blissfully through the hallowed halls of your favorite institution when all of a sudden, your elbow punches through a canvas. The art is ruined. Unfortunately, a similar scenario recently befell an as-yet unnamed Austrian tourist visiting Italy last week. While posing for a photo at Museo Gypsotheca Antonio Canova in Possagno, Italy, the tourist sat down on the feet of a seminude sculpture made by the Italian artist Antonio Canova. The following was captured on security camera footage: when the tourist stood up again, the sculpture of Pauline Bonaparte as Venus Victrix had lost a couple of her toes.

According to the New York Times, local authorities traced the man down after he left the museum in order to hold him accountable. It seems that the tourist eventually actually “turned himself in” and wrote a letter to the President of the Canova Foundation Vittorio Sgarbi expressing his distress over the incident. The museum posted excerpts from this letter on their Facebook page. “It was irresponsible behavior on my part, the consequences were not known to me, so I normally continued the visit to the museum and the entire stay in Italy (I didn’t escape),” the culprit wrote. “During the visit I sat on the statue, without realizing the damage I evidently caused. I ask you for information on the steps that are necessary on my part in this very unpleasant situation for me and for which, firstly, I apologize in every way.”

CNN reported that a court in Treviso was considering pressing charges against the man. Many different arts institutions around the world have differing ideas about what sort of punishment should accompany the crime of damaging art, and similar debates revolve around whether patrons should be allowed to take selfies. However, one thing’s for sure: the embarrassment that accompanies being captured on camera breaking a centuries-old sculptures should be enough to deter anyone from sitting on art in the future. 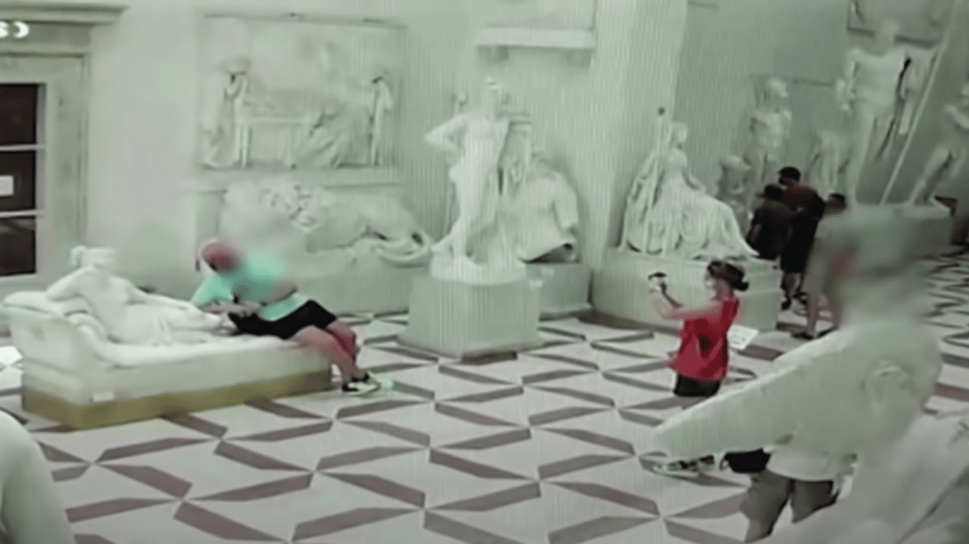