Conservative pundit Ben Shapiro watched the new Cardi B/Megan Thee Stallion video “WAP” about arousal and vaginal secretions and got so excited he rushed to Twitter to ritually chop off his unmentionables and then set himself on fire. “My only real concern is that the women involved — who apparently require a “bucket and a mop” — get the medical care they require,” he declared sententiously. “My doctor wife’s differential diagnosis: bacterial vaginosis, yeast infection, or trichomonis.”

So, yes, that’s Ben Shapiro explaining that his wife, a medical professional, doesn’t think women lubricate during sex. The inescapable conclusion, as many on Twitter pointed out, is that sex with Ben Shapiro is not very stimulating.

Shapiro’s indulgence in self-humiliation is unusually graphic, but it’s not exactly surprising. Black women’s sexuality has often been treated as scandalous and abnormal in ways that reveal more about the scandalized diagnosers than about the people they are purportedly diagnosing. “WAP” (“Wet Ass Pussy”) references that history in order to playfully reclaim it. Shapiro’s (apparently dry) faceplant shows how successfully they’ve done so.

Racist white people have been expressing misogynoir and moralistic, medicalized titillation with Black women’s bodies for hundreds of years. In 1810, Sara Baartman, a Black South African Khoikhoi woman, was brought to Paris and exhibited on stage as a freak show attraction; viewers could touch her genitals and rear end for a fee. She died in 1815, at which point scientist Georges Cuvier dissected her in public, displaying her genitalia—much as Ben Shapiro, in his tweet, makes a show of displaying Cardi B and Megan Thee Stallion’s vaginas, and diagnosing them as diseased.

It’s not just Shapiro, either. Rapper and singer CeeLo Green echoed these tropes when he criticized the “WAP” video for being “disappointing on a personal and moral level.” He went on, “There was once a time when we were savvy enough to code certain things…. But now music is shameless, it is sheer savagery.”

It’s odd to see CeeLo arguing for a moral respectability politics when his own hits include the song “Fuck You.” He also posted a series of tweets in 2014 in which he argued that having sexual relations with an unconscious woman was not rape because “If someone is passed out they’re not even WITH you consciously! so WITH Implies consent.” He later apologized, but still, it seems clear that CeeLo is more comfortable with drugging women and raping them than he is with women talking about enjoying sex. Black women are labeled as abusive to erase or excuse the abuse directed at them. The idea that Black women talking about sex is “sheer savagery” in particular harkens back to Baartman, a Black woman whose sexuality and naked body was seen as a primitive monstrosity.

Cardi and Megan play with that trope about savagery; the “WAP” video is filled with tigers and other wild cats, as well as with lots of phallic writhing snakes. In fact, CeeLo and Shapiro’s criticisms were so predictable that the song reads as a playfully contemptuous, prescient dismissal of both of them. Shapiro and CeeLo insist that Cardi and Megan are irresponsible, savage bodies, and their response is a high camp banger about how women’s sexual pleasure is conscious and healthy. “Hop on top, I wanna ride/I do a kegel while it’s inside,” suggests that Cardi has more practical medical sexological knowledge than Ben Shapiro’s wife. “I ride on that thing like the cops is behind me,” is a succinct riposte to CeeLo’s respectability policing.

Perhaps the best part of the video is toward the end, when Cardi and Megan consciously role-play as Shapiro/CeeLo style cramped moralists, looking into doorways with mimed horror/disgust as various guests (Mulatto and Sukihana, among others) gyrate and thrust. The moralizing gaze is part of the sexual game. It’s fun to be shocking and to be shocked, and Cardi and Megan are fluid enough not to miss out on any role. (“Tie me up like I’m surprised/Let’s roleplay, I’ll wear a disguise.”)

CeeLo and Shapiro think that they’re clean moral critics safely looking down upon that gushy swamp. But the male gaze directed at Black women isn’t clean or wholesome. It’s mostly been mired in hate, abuse and a conflation of desire and violence. Cardi and Megan are just goofing around. But Black women enjoying themselves is enough to make supposedly intelligent men rush to tell the world about the aridity of their sex lives and their souls. 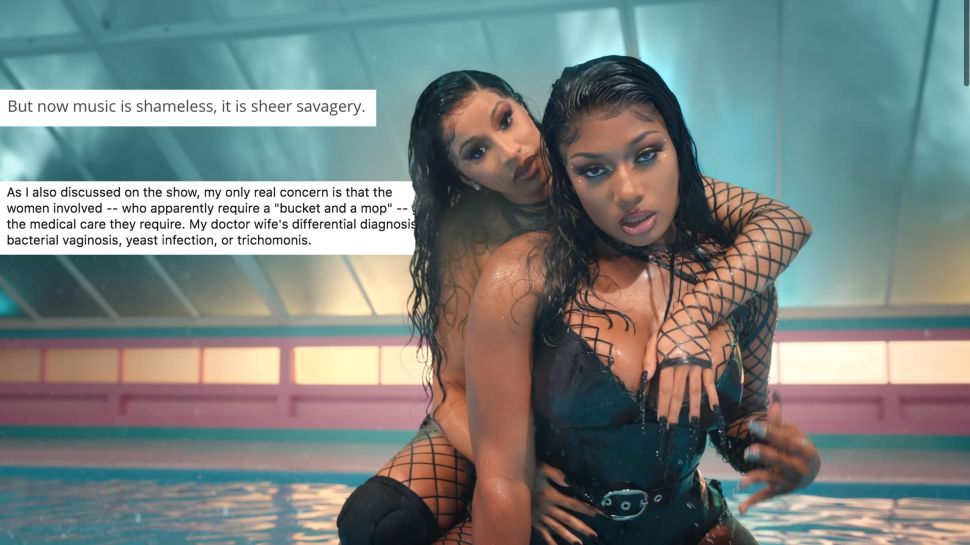