From its undistinguished beginnings as a message board fantasy about Hillary Clinton being clapped in handcuffs, the QAnon conspiracy theory has grown into a legitimate force in conservative politics, commerce, and media. The paranoia, fake scandals, and bloodlust that define QAnon have earned purchase with public leaders and gone from internet fever to real-world phenomenon, linked to a slew of crimes ranging from child kidnapping to murder.

As QAnon has sucked up more followers, social media companies have struggled to react. While Q was banned from Reddit two years ago, the biggest social media tech companies have taken until now to make any changes to stem the abusive posting and spamming of Q believers. And these changes are coming too late to have any real impact, other than mildly inconveniencing followers and temporarily removing a few Q influencers.

In reaction to the massive growth of Q Facebook and Twitter both announced they’d be taking steps to ban major accounts and curb harassment and searchability. Facebook’s ban, on August 19th, is still too recent to determine whether it’s had an effect on the movement. So far, it looks as if about 100 groups have been removed. But Twitter’s crackdown in mid-July is now a month old, and while it has much more tangible results, even those have been decidedly mixed so far.

I'm trying to take stock of the damage to QAnon assets after Facebook dropped the axe last week. I've now got 196 QAnon public groups and 183 public pages left on my list, down by nearly 100 in total. The remaining groups have 911,000 members and the remaining pages 790,000 likes pic.twitter.com/KZ18ynr1nB

For one, Q has become too entrenched in GOP doctrine to outright ban it. There are dozens of QAnon-endorsing candidates for Congress and local office—including several who won their primary elections. President Trump has retweeted numerous QAnon-endorsing accounts or memes. Q has been favorably covered by Fox News and OANN. And a growing list of public figures have tipped their hats to QAnon, including former National Security Adviser Michael Flynn, a figure revered by the Q movement who “took the oath” to be a “QAnon digital soldier” in a July viral video. Flynn’s video generated thousands of copycats who filmed themselves doing the same thing.

With all that in mind, Twitter’s ban was too limited to have any real impact. Twitter announced in July that it would be suspending over 100,000 accounts, including many serial harassers; blocking Q-related hashtags from trending; and preventing direct messages with links to Q sites from being sent. But crucially, the site isn’t banning QAnon content itself, merely making it harder to search for and spread. In the month after Twitter announced its new measures, Q posts and hashtags are harder to find, but not impossible. Public personalities who have fallen afoul of Q are still facing harassment swarms, to the point where a tweet from Republican Rep. Denver Riggleman announcing he’d co-sponsored legislation to condemn QAnon in Congress was quickly hit with thousands of replies from Q believers.

QAnon and the conspiracy theories it promotes are a danger and a threat that has no place in our country's politics. I condemn this movement and urge all Americans to join me in taking this step to exclude them and other extreme conspiracy theories from the national discourse. https://t.co/g10c1XGsWo

Ultimately, only a few major Q figures have been suspended. Days after the crackdown was announced, Twitter suspended three of the most high-profile QAnon promoters: Joe M., Tommy G., and Inevitable ET. These might sound like video gamer handles, but they’re hugely important figures in the Q world, each with hundreds of thousands of followers. Many have been suspended multiple times, only to easily rebuild their accounts. And that’s what happened again, with all three sneaking back on and creating new accounts after their bans. And when those accounts were suspended, they snuck back again.

Beyond ban evasion, Q followers very quickly got savvy to how they could get around the other measures Twitter was installing. Many Q devotees used hashtags that were variations on Q terminology, such as #17Anon and #CueAnon. They made giant number 17s (Q being the 17th letter of the alphabet) out of emojis. They intentionally misspelled words or put extra spaces in, and used memes and gifs to try to get around Twitter’s filters. And many just stopped using hashtags altogether.

Of course, even Twitter couldn’t have predicted that the ban on QAnon would coincide with the sudden rise of human trafficking conspiracy theories. Driven by the explosive growth of QAnon in Facebook groups and among Instagram influencers, child sex trafficking suddenly became an ever-present evil lurking around every corner. And since child trafficking and pedophilia, mostly connected to Jeffrey Epstein and Hollywood, have been a part of QAnon lore since the beginning, QAnon helped drive that as well. Q followers were responsible for retweeting #SaveTheChildren over 200,000 times over the second weekend in August, and many of the anti-trafficking marches that took place later in the month were clearly intertwined with the Q movement.

Since Twitter imposed some restrictions on well-known QAnon phrases and hashtags appearing in trends, the conspiracy's followers have started using new ones to circumvent the ban. #SavetheChildren is one of them, which has been tweeted over 200,000 times since Friday pic.twitter.com/8SJgyOWfj7

It’s not clear how much of the #SaveTheChildren outcry stems from Q believers trying to get around Twitter’s filters, and what’s a pandemic-fueled outgrowth of genuine fears of child abduction. Q promoters certainly didn’t invent such conspiracy theories, and the idea of “saving children” from the clutches of traffickers and pedophiles is appealing to the majority of people—even if the numbers thrown around by anti-trafficking activists are often vastly inflated.

Beyond that, many “old school” Q gurus distrust the new believers marching to end pedophilia and waving signs with Q slogans on them. They’re seen by some promoters as fakers who are infiltrating the movement to make it look bad or even perpetrate a false flag attack to blame on Q.

So why are Q followers so keen to bend the rules to stay on Twitter, when the site clearly doesn’t want them and is actively suppressing their movement? Why not go to one of the other alternative right-leaning social media services, like Parler or Gab?

The answer lies in how Q sees itself. Q followers believe they are digital soldiers fighting for the soul of the human race and its children. Twitter is one of the most important battlefields in this war, a place for receiving orders, decoding messages, and spreading encouragement to comrades. And it has a membership that extends far beyond the cloistered worlds of Twitter alternatives like Parler, which have struggled with technical problems and growth even as Twitter has restricted Q speech. Twitter is where Donald Trump leaves his messages, where the mainstream media puts their “hit pieces” about QAnon, and a place normal enough not to repel would-be converts to QAnon.

Q’s devotees won’t concede it to the deep state without a fight. When the alternative is to watch America’s destruction at the hands of the Clinton/Obama/Soros cartel, any form of surrender is unthinkable. So they stay, trying to outwit Twitter’s bans and keep the war going. After all, what soldier simply gives up in the face of enemy action? 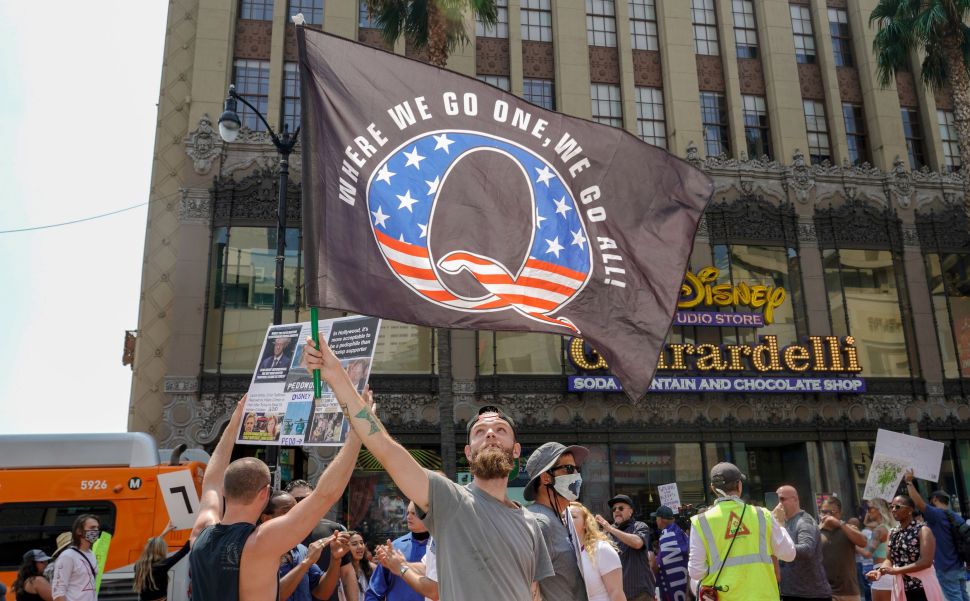