“I love my paintings,” says Amoako Boafo, surrounded by his first solo show at Chicago’s Mariane Ibrahim Gallery, titled “I Stand By Me.” He’s reflecting, in his quiet way, about comments he received as a grad student in Vienna that his figures were “too black.” Luckily the Ghana-born, Vienna-based Boafo didn’t listen and arrived at where he is today, fresh off a collaboration with Dior, with skyrocketing auction prices and at least one major museum acquisition.

But Boafo appears fairly unfazed by the sudden meteoric rise. With or without all the attention, he would still be in the studio, using his fingers to create skin like no other, full of movement and emotion. It’s the “magic,” as he calls it, that the artist makes with finger painting that sets him apart. According to his gallerist Ibrahim, his paintings represent a leap forward in portraiture. “He completely changed and innovated—texturized—the way portraiture is done,” she says. In Boafo’s paintings of Black subjects, the skin is full of energy and alludes to more than blackness, perhaps what’s under the skin, as opposed to creating perfectly illustrative figures with paintbrush, shadow and highlights. It’s this that made him appealing to collectors early on, says the gallerist. Ibrahim, who recently relocated to Chicago from Seattle, specializes in representing artists from the African diaspora.

But she’s quick to also point out that this rocket ship to success will mean that some buyers only want to take a quick ride and don’t understand the artist’s true worth. As she puts it, the market can be “abusive.” She’s talking about speculating collectors offering high six figure sums for paintings on the secondary market, and those willing to part with works only recently acquired to make quick profit during an uncertain time. At the Phillips auction of contemporary art in February, one of Boafo’s paintings, The Lemon Bathing Suit, 2019, sold for an astounding $881,432 after being estimated between $39,130 and $65,217. News of the auction dropped like a bomb and people started to scramble for his work.

“I’m pretty, pretty sure that those who separated from their work intentionally probably regret it now, because Amoako is not an artist that is fashionable or anything like that. He’s the artist that we’ve been actually waiting for,” says the gallerist.

That’s why the recent acquisition by the Guggenheim Museum of his 2019 painting Joy Adenike is such an important step. Acquisitions to major permanent collections help to ensure sustainable growth for an artist on fire in a fast-moving art market.

While the feedback he received in Vienna showed that perhaps Europe didn’t understand his genius, in the United States Boafo found collectors thirsty for his work. In the context of other great painters of portraits and the Black experience like Kerry James Marshall, Kehinde Wiley (who was one of Boafo’s earliest collectors) and Njideka Akunyili Crosby, Boafo is pushing Black portraiture to the next level, says Ibrahim.

The Coronavirus pandemic has given Boafo a chance to take a breather and focus on producing the work for “I Stand By Me.” Right before the lockdown Ibrahim made a visit to see the painter in his native Accra, where he set up a studio to be close to his mother’s cooking and soccer games with friends. But Boafo admits that when the virus hit he was “stressed,” feeling like he was being pulled in a million directions. “Whatever was planned for last year happened anyway,” he says, but “slowing things down for me was really good.”

“I Stand by Me” was originally slated for June, but was delayed due to the pandemic. During the interim, the gallery finished a large outdoor space and made improvements to be more conducive to social distancing. The explosive Phillips auction and the solo show in Chicago came in short succession after a sold-out Mariane Ibrahim Gallery booth at Art Basel Miami Beach 2019, and a solo show at LA’s Roberts Projects earlier the same year. Ibrahim and the artist had an organic connection and formed their relationship over a few years of ongoing communication leading up to this moment.

But amid all the current commotion, Boafo is working on more than just his art. He’s building an artist residency in Accra so that African artists don’t have to leave the continent for professional opportunities. It will form part of a growing network of organizations and spaces concentrating on that aim (Wiley recently inaugurated his own residency space in Senegal). “I’m happy to be part of these growing spaces on the continent, because I think it’s time that we take good care of ourselves,” he says of bringing professional opportunities to his birthplace.

Boafo can’t reveal what he’s working on after that, but judging by the excitement radiating from both the artist and his dealer, it’s something big. Ibrahim keeps the lid on any juicy details, ever caring and mindful of her artist’s wellbeing and delicate success. Whatever comes out of this star’s studio next is sure to be a sensation. 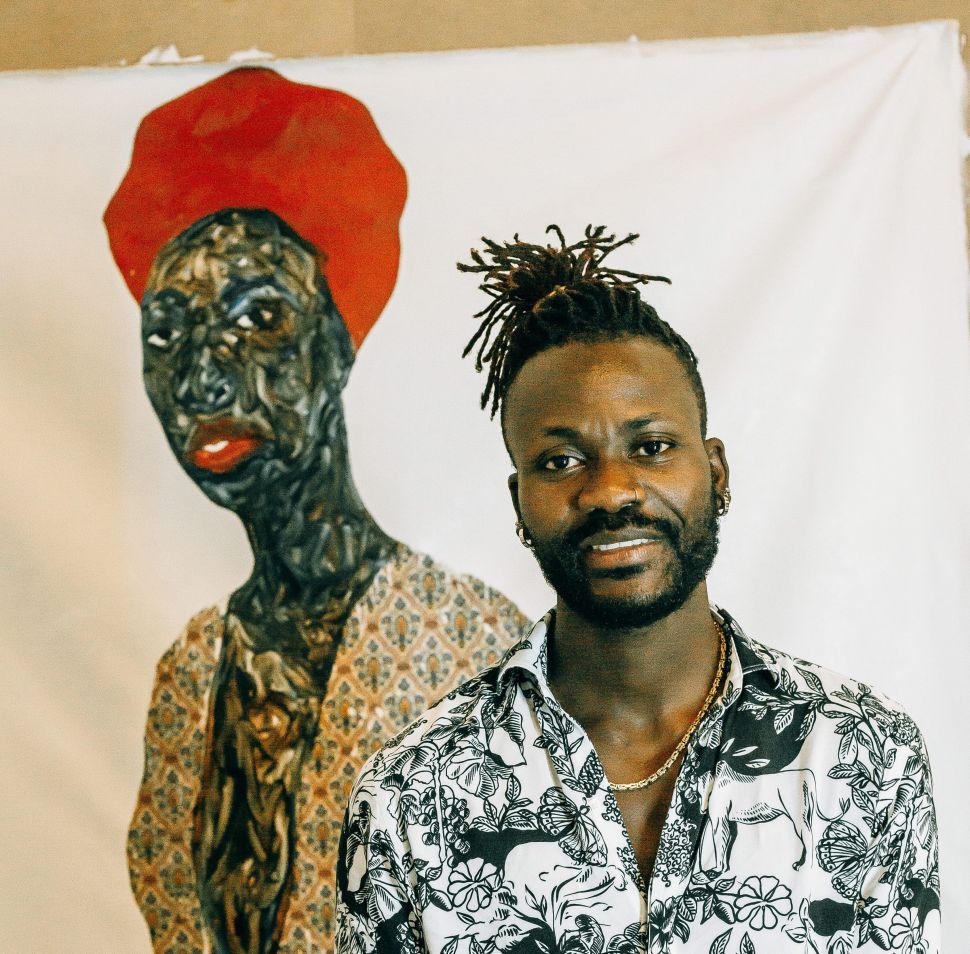