At Tuesday’s “Time Flies” event, Apple unveiled the latest iPad Air, which represents a complete overhaul from the previous model both inside and out.

From the outside, the new iPad Air actually looks strikingly similar to an 11-inch iPad Pro, the more high-end model. It has the same design elements as the Pro, such as flat sides, defined edges and all-around bezels. The new Air features a 10.9 inch liquid retina display at a resolution of 2,360 by 1,650.

Inside, the new tablet is powered by A14 Bionic chip, “the most advanced chip” Apple has ever made, the company said. The tiny, five-nanometer processor has a six-core CPU, 11.8 billion transistors and specific machine learning accelerators that allow developers to improve app functionality on the device.

Apple said the A14 chip will improve performance on the new iPad Air by at least 40 percent compared with the old model.

The new iPad Air also has the same 12-megapixel rear camera as the iPad Pro and improved video stabilization features. The front FaceTime camera is a 7-megapixel lens with smart HDR and support for 1080p 60fps video capture.

On the accessories side, the iPad Air can be matched with the new Apple Pencil ($129) and Magic Keyboard ($299).

However, there’s a catch. The $599 beginner’s model only has a 64GB storage, which is likely insufficient for most modern-day iPad users. The next level up will be a 256GB device for $749, making it just $50 cheaper than a 128GB, entry-level iPad Pro. There’s no other options in between. 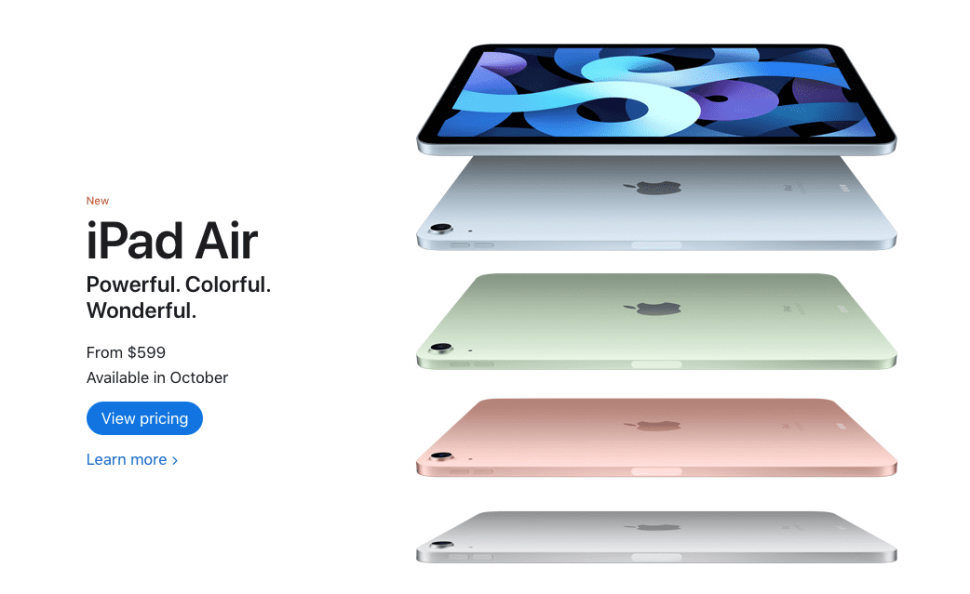