Christos Nikou’s debut feature film Mila (or Apples) draws us into its uncanny world with images of life on pause. The most striking and familiar among them? A half-made bed, sometime during the day. For Aris (Aris Servetalis), a middle-aged man whom we first glimpse knocking his head against concrete, daily routine feels like a prison with invisible walls (though we don’t yet know the exact nature of the melancholy that befalls him). Outside, however, the nation of Greece, and perhaps the world at large, has begun to experience an odd sort of pandemic. Frequently, and at random, adults have been waking up with sudden bouts of amnesia that have wiped their memories clean.

The word “pandemic” is wince-inducing in the year 2020, but Nikou’s film, which he directed and co-wrote with Stavros Raptis and has been in the works since 2017, isn’t so much about physical realities under duress as it is about temporal ones. If there’s any connection to be made between Apples and COVID-19, it involves the lingering feelings of loss, and of being robbed of time.

Through minor, surreal interactions in the background—and eventually, when Aris himself wakes up on a bus with no ID and no memory—the film peels back the layers of this cognitive plague, which society has begun to accept and adapt to. Aris, for instance, is placed in the care of doctors who specialize in treating amnesiac citizens with no family or paperwork, helping them re-adjust to society in lieu of a cure. They send their subjects a series of audio tapes instructing them to go out and have new (well, “new”) life experiences, which they document with polaroid cameras. Along the way, Aris meets a fellow patient, Anna (Sofia Georgovassili), who’s a few steps and a few photographs ahead of him on the checklist, which involves everything from riding a bike for the “first” time (a skill the patients seem to retain through muscle memory), to having a one night stand, to crashing a car for the fun of it.

Between the polaroid memories and the amnesiac romance, a few Hollywood films likely come to mind—perhaps Christopher Nolan’s Memento or Michel Gondry’s Eternal Sunshine of the Spotless Mind. But despite these surface similarities, Apples is entirely its own beast, both as a reserved and plot-less boat ride down one man’s lonely psyche, and as a fixture of the last decade of absurdist Greek cinema. The latter movement (termed “Greek Weird Wave” by critic Steve Rose in the Guardian) arrived at the heels of the Greek financial crisis in 2009, and included such films as Dogtooth by Yorgos Lanthimos, which, as it happens, Nikou worked on as an assistant director. Eleven years and several brilliant surrealist works later, Apples continues that cinematic legacy with precision, as if to get under the skin of the many aloof, isolated protagonists that have come to define Greek films on the global stage (or at least, the international festival scene). One might say Nikou is exploring, from within, the kind of emotional disconnect that leads one to live life at a remove.

In the case of Aris, how much he does and doesn’t actually remember is hard to pin down, since the film doesn’t let us all the way into his point-of-view. Instead, it introduces alluring questions of selective memory—and selective forgetting. Ordinarily, being kept at an arm’s length from a protagonist can be frustrating, but Nikou and lead actor Aris Servetalis create an intriguing mystery through silences and sunken glances. What we don’t yet know about Aris feels locked away in a treasure chest, whose contents we may or may not want to see for ourselves.

Co-creating this mystery of memory is cinematographer Bartosz Swiniarski, whose compressed, nearly-square 4:3 frame mirrors both the polaroid snapshots Aris inserts into his scrapbook, as well as a cinematic aspect ratio from decades long past. The film’s very fabric seems to evoke a fundamental visual sense memory. While shot digitally, it uses the Arri Alexa to mimic the tangible, grainy texture of celluloid—its visual noise often feels like a fog the characters need to cut through—but the picture also feels colour-timed to include a touch too much green. It looks, at once, both alien and familiar, like a memory half-recalled, or a sensation whose origins you can’t quite trace.

To say much more about the story would be to rob viewers of an unusually disquieting experience, but one which ultimately loops back around to a place of difficult comfort after prodding at wounds you may not have realized needed tending to. While creating the film, Nikou drew on loss in his own life: the death of his father who, when he was alive, ate “seven or eight apples a day,” believing them to strengthen his memory. As the title suggests, the fruit pops up in the film on more than one occasion, both as a fitting tribute and as a character quirk, but it eventually comes to represent a choice for Aris. In the event that apples might help him remember his past life—a time before these new comforts of simple, linear tasks, each with controlled, uncomplicated outcomes—would he even want to?

The film is adept at capturing loss not just as something external—as the act of losing—but as something akin to becoming lost in the process. Like being cast out to sea without a paddle, and with no idea when the shore will come into view. 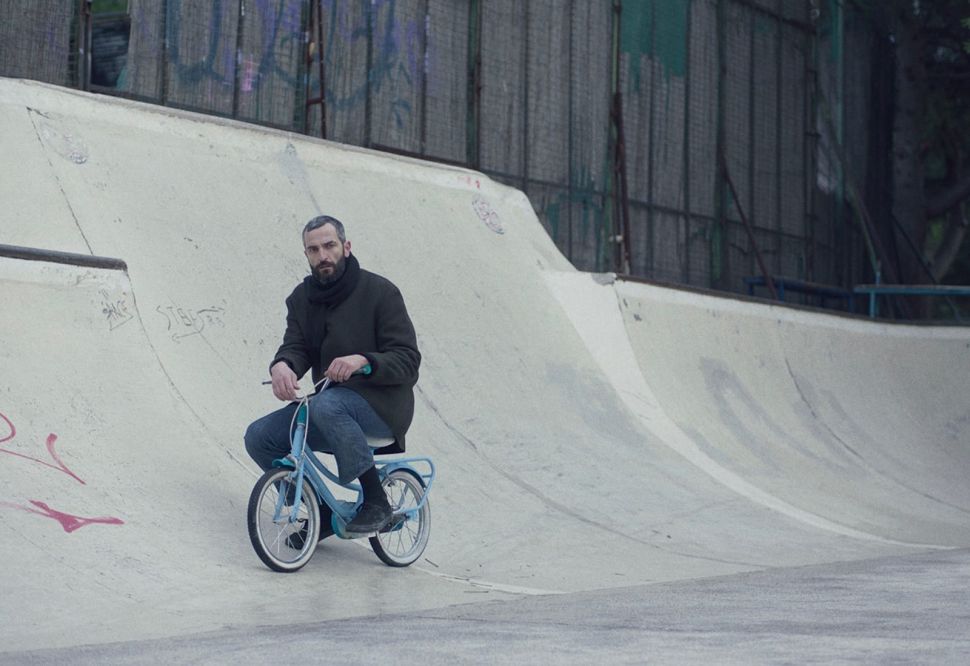