Disney’s streaming service offers a rich well of content, from its animated classics to its throwback TV series to new shows like The Mandalorian. But some of the best features on Disney+ are actually hidden extras that offer an inside look at the making of films or offer a look into the rich history of the Walt Disney Company. Many titles on Disney+ have an accompanying selection of extras—most of which originally graced special-edition DVDs or Blu-Rays—that include everything from to deleted scenes and theatrical trailers to behind-the-scenes documentaries and interviews.

Although there are plenty of extras to find on Disney+, here’s a look at 10 of the best—and which films they are found under—on the streaming service.

Wouldn’t it be amazing to go back in time to tour the old Disney studios—where animation was born back in the 1930s? Well, you kind of can in this 30-minute film that features old photos, videos and audio recordings of the groundbreaking animators who defined Disney’s Golden Age. It features tons of firsthand anecdotes and stories, including how Walt famously acted out the plot of Snow White and the Seven Dwarfs and how he played baseball with the other animators during the lunch hour (and argued about foul balls, apparently!). Watch on Disney+.

Walt & His Dogs (Lady and the Tramp)

Through archival recordings and photos, this charming 8-minute extra tells the tail—er, tale—of the dogs Walt Disney owned and loved throughout his life and how that adoration influenced his films and animation. That scene in Lady and the Tramp when Jim Dear gifts his wife, Darling, a puppy in a hatbox tied with a ribbon on top? Walt did that for his wife, Lilly. “I’ve always loved dogs, so I feel fortunate that I had so many dogs in my life,” Walt says in an archival recording featured in the extra. Watch on Disney+.

What’s it like to work at Pixar? This 15-minute “day in the life” featurette will give you a glimpse. It follows the production team working on the 2013 Monsters Inc. prequel. From storyboarding and meetings about dialogue and audio to conversations about where Mike Wazowski’s arms should be in one particular scene to all the free food the team is provided throughout the day, it shows an inside look at how Pixar employees work and play. Warning: This will make you jealous. Watch on Disney+.

Reminisce about Disney’s most famous live-animated film with the stars of Mary Poppins—Julie Andrews and Dick Van Dyke—along with Richard Sherman, one half of the famous Sherman Brothers, the songwriting duo who wrote the songs for the 1964 film, among many other films and Disney park attractions (they’re responsible for “It’s a Small World (After All)”). Gathering around the piano (with Sherman playing), the three tell unheard stories behind the famous score, and the film itself, in this 17-minute extra. They also talk about a song that didn’t make it into the film—because Andrews told Walt it didn’t snap .Watch on Disney+.

Beauty and the Beast is arguably one of Disney’s best animated features—it was the first animated film to be nominated for Best Picture at the Academy Awards and was one of the films that helped revitalize Disney’s struggling animation department during a resurgence in the late 1980s and early 1990s. But it wasn’t always destined to be great: scrapped storyboards, a halted production, change of directors and the death of the film’s lyricist, Howard Ashman, were part of the film’s challenging history. You’ll learn about those obstacles and much more in this 53-minute feature that gives an in-depth, behind-the-scenes look at the Disney classic. Watch on Disney+.

After the success of Disney’s first animated feature, Snow White and the Seven Dwarfs, Walt spent the profits on a huge studio and got to work on his second feature film—determined to improve the animation and all aspects of the process and prove that his first feature film success wasn’t a fluke. That’s one takeaway from this 5-minute extra that features audio recordings of Walt from a series of interviews conducted in 1956—required viewing for Disney history buffs. Watch on Disney+.

They Know the Way: Making the Music of Moana (Moana)

In Disney films, the songs go a long way toward setting the scene, establishing the cultural framework and revealing the characters’ emotions. (Can you even imagine Pinocchio without “When You Wish Upon a Star” or Cinderella without “A Dream is a Wish Your Heart Makes”?) That was the responsibility felt by Lin-Manuel Miranda, Mark Mancina and Opetaia Foa’i as they were working on the now-popular music from Moana. Get an inside look at how they came up with the toe-tapping and powerful music featured in (and defining) Disney’s 56th animated feature film in this 12-minute extra. You’re welcome. Watch on Disney+.

While the story wasn’t the deepest of Disney’s animated classics (Princess Aurora famously only has 18 lines), the 1959 film Sleeping Beauty was more sophisticated, decorative and visual than any animation before—or even after—it. “It’s a caliber of art and craftsmanship that’s hard to find these days,” says animator Andreas Deja. In this 43-minute feature, artists, historians and Aurora herself (actress Mary Costa) reflect on the making of the film and how its art style is different than any other Disney feature, past or present. If you’re a fan of animation—and Disney history—this featurette is a can’t-miss. Watch on Disney+.

Different from many Disney animated films of the time—no princesses, heavy themes, including death and African influences and music—The Lion King was a surprise blockbuster. But it took a while for it to get there. And even after the success of the 1994 film, many—including Disney execs—were skeptical about its transition to the stage. But when it hit Broadway in 1997, it was another roaring success. This 37-minute extra tells the story of The Lion King from conception to film to Broadway smash hit (23 years and running). Talk about a circle of life. Watch on Disney+.

Turns out Pixar employees aren’t just crazy for Cars—they’re also crazy for cars. Pixar hosts a yearly Motorama, a car show that lets employees show off their cool, classic collections: from a 1972 Fiat Sport Sedan to a 1957 Pontiac Safari to a 1934 Ford Sedan. “People here are somewhat sentimental people, and I think that same attention to detail that goes into maintaining these old things goes into creating stories that have sentimentality and have high attention to detail,” animator Mark Walsh says in the 6-minute film. Watch on Disney+. 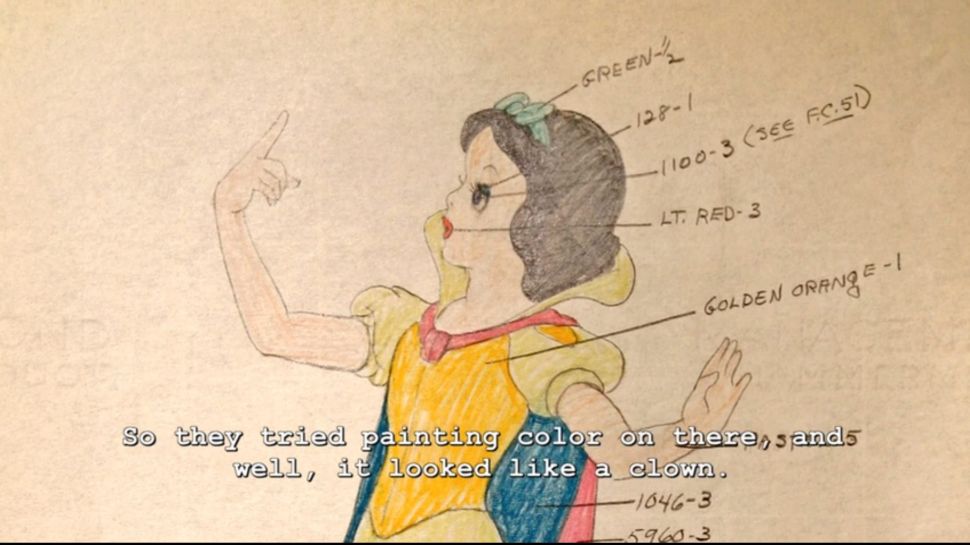