Fall is here! Everything’s closed! How to reconcile these facts in a non-depressing way? We’re still a vaccine away from crowding Broadway or a 75-seat black box. If one iota of good has come from lockdown, it’s how technology has brought theaters around the world to our laptops. I’ve been able to see archival work from Germany’s legendary Schaubühne; re-broadcasts of London’s smashing NT Live series; and top-notch work from San Francisco to Alabama and right here in New York. With wifi, you can be a theater tourist.

I had hoped to curate a fall preview that was equally global but, well, the rest of the world has moved on. Theaters in Europe are set to re-open sometime this fall, but here in America, our drama will be distanced until 2021. Still, there are plenty of events worth your while, like Zoom reading series that have been employing theater folk: producer Jeremy Wein’s excellent Play-Per-View, and Mirirai Sithole’s go-to hang for new plays (particularly by BIPOC artists), Aye Defy. Established companies have also stepped into the breech with online programming, including Chicago’s Steppenwolf Theatre Company and Woolly Mammoth in D.C. So until that vaccine comes, curtain time means dimming the lights and sliding on headphones.

Theatre For One: Here We Are presented by Arts Brookfield (Thursdays through September 24)

Years ago, set designer Christine Jones (Harry Potter and the Cursed Child) created a traveling art installation-meets-minivenue: Theatre For One. Spectator and performer sat across from each other in a sort of giant upright steam trunk, and magic happened. Turns out this model scales perfectly for online theater in the pandemic. In this live digital event, an actor performs a playlet for one audience member. The talent roster includes Tamilla Woodard, Eisa Davis, Lynn Nottage, Regina Taylor and others. It doesn’t get more intimate than this.

How many hours have you logged on Call of Duty or Mario Kart in recent months? Don’t answer. Instead, tune in to Madhuri Shekar’s In Love and Warcraft, streaming live (and then on-demand) from American Conservatory Theater (A.C.T.) in San Francisco. In this digital-age rom-com, a virginal, college gamer girl must choose between her joystick and the handsome, sensitive boy who wants her attention.

Playwright-director Richard Nelson wraps up his pandemic trilogy focusing on the Apple family in upstate New York. Since lockdown, Nelson has returned to this thoughtful, chatty family of siblings that he first introduced at the Public Theater ten years ago. Featuring the sublime stage veterans Stephen Kunken, Sally Murphy, Maryann Plunkett, Laila Robins and Jay O. Sanders (who will be performing from their homes), the Zoom family reunion is bound to be packed with topical references and emotional nuance.

What vice has gotten you through the pandemic? FaceTime dirty talk? Pre-dinner martinis? Maybe you unwind after a long day of Zoom meetings by getting toasted on dank weed while watching At Home with Amy Sedaris (or so I have read). Would you like to know the history of that funky herb you’re smoking (or vaping or chewing)? HERE is streaming a concert of a work-in-progress by rapper/THC evangelist Baba Israel, based on Smoke Signals: A Social History of Marijuana by Martin A. Lee.

What the Hell Is a Republic Anyway? presented by New York Theatre Workshop (September 22 to November 3)

Actor Denis O’Hare and writer-director Lisa Peterson explore the ancient history of Rome in this timely presentation by New York Theatre Workshop. Can we learn from a great civilization that traded five centuries of democracy for a disastrous dictatorship? The self-referential piece (O’Hare and Peterson reflect on their own collaborative process as well as politics) will be presented in four chapters every other week, leading up to Election Day.

Each year, Vermont-based PTP/NYC touches down at Chelsea’s Atlantic Stage 2 to present revivals in repertoire, often work by the flinty, experimental British dramatist Howard Barker. This fall, the troupe is Zooming like everyone else, but here’s the exciting news: their final streaming offering will be Caryl Churchill’s Far Away directed by Cheryl Faraone. It’s a short shocker about totalitarian horrors in our backyard wherein flora and fauna wage all-out war. This 2000 dystopian fable seems weirdly apt today.

The School for Wives presented by Molière in the Park (livestream October 24; on-demand through October 28)

When I reviewed Molière in the Park’s June broadcast of Tartuffe, I was impressed by how the limitations of Zoom actually maximized the pleasures of Richard Wilbur’s highly musical, rhyme drunk translation. Well, here’s a different comedy by the French master of farce, and I expect no less a good time as Molière skewers male jealousy and marital fidelity. The regal and mesmerizing Tonya Pinkins (Caroline, or Change) stars as sexist prig Arnolphe in an all-female cast.

The closing of stages has meant the opening of ears, as artists flock to radio waves and podcasts to express themselves for AirPod-enabled audiences. The series Playing on Air teams playwrights with stage talent for ear-pleasing short plays. The fall season boasts new works by Melis Aker, Lucas Hnath, Hamish Linklater, and Dominique Morisseau. The casts will include such vocally unmistakable stars as Carol Kane (The Unbreakable Kimmy Schmidt), Julie White (The Little Dog Laughed), William Jackson Harper (The Good Place), and April Matthis (Toni Stone). A new episode drops every Sunday (except November 1).

Four mysteriously linked characters guide one another through ordinary (or not-so-ordinary) obstacles in order to get through one rotation of the earth. In this English-language premiere of a work by Québecoise writer Gabrielle Chapdelaine, four actors perform live from multi-camera green-screen booths. It’s produced by the Cherry, a five-year company based upstate in Ithaca.

You may have heard of the Japanese theater traditions Noh, Butoh, or Kabuki, but Kyogen? Think of the cartoons they used to run before movies. Kyogen are short, comic interludes, in contrast to the slow, somber form of Noh plays—which they traditionally are interspersed with. Now Mansai Nomura, a Kyogen star, appears online to share new works: Kagami-kaja (A Mirror Servant) and Ayu (Sweetfish) on two consecutive days via Japan Society’s website. 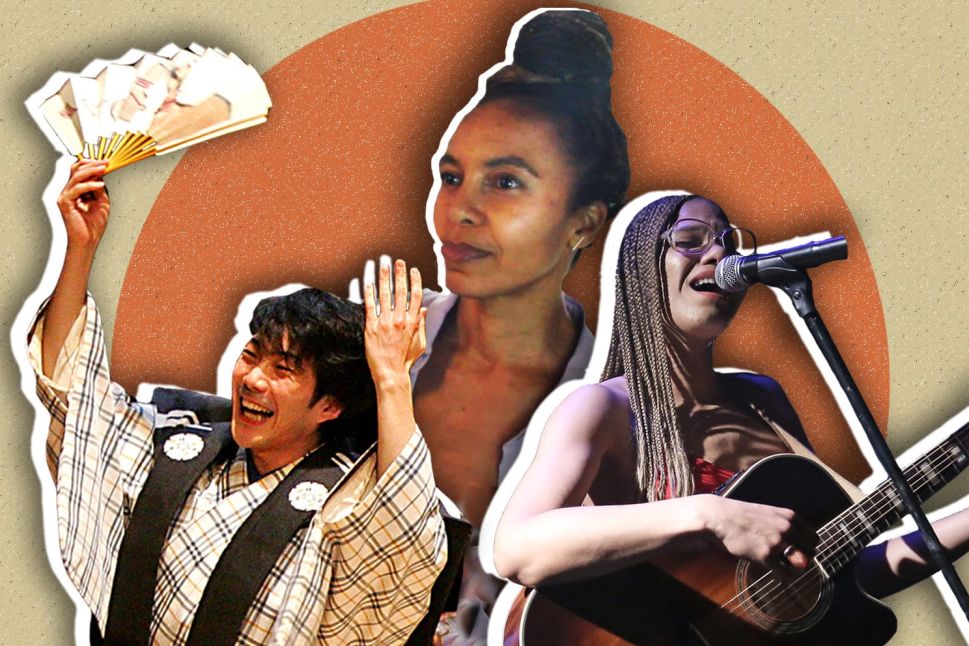