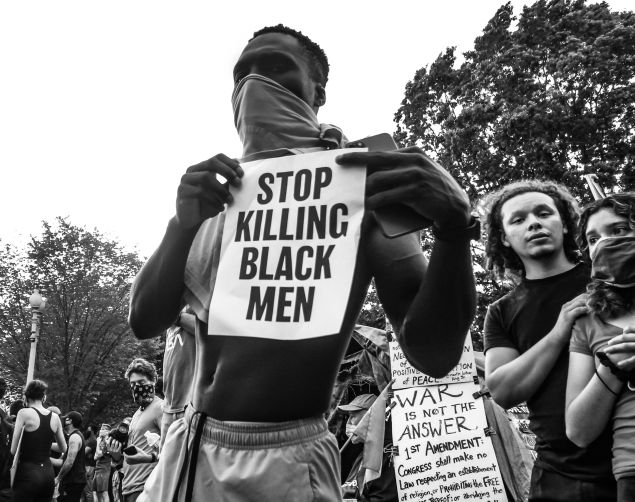 Burning precincts. Flipped police cars. Thousands of signs float above seas of people. Tear gas, rubber bullets and the firm black fist. To some, these images would be synonymous with utter chaos and calamity. However, to Black people, these moments are signs that permanent change is finally on the horizon.

With this historical turn of events, debates of how to capture this moment have arisen among the larger conversation of racial equality. Black photographers spoke with Observer about how they have captured the movement and the lessons it is teaching the broader arts community about race, respect and responsibility.

Black photographers nationwide have joined the protest efforts in the way they know how: through art. However, some photographers have remarked on the impossibility separating their own emotions from the objective documentation of these historic moments.

Take photographer Dee Dwyer, whose work has appeared in in The Wall Street Journal, The Guardian, Vanity Fair, and New York Magazine, among others. She openly spoke about the emotional weight of working in a situation that felt so personal.

“I can’t [separate myself]. I am a black person and a black woman. I’m also a mom of two black kids. A 10-year-old girl and a six-year-old boy. This moment is about me,” Dwyer told Observer.

For many Black photographers who make their work while attending the protests, there is a distinct inability to separate from the moments they watch unfold due to the horrifying reality that even a happenstance interaction with law enforcement could lead them to be the subject of another protest. 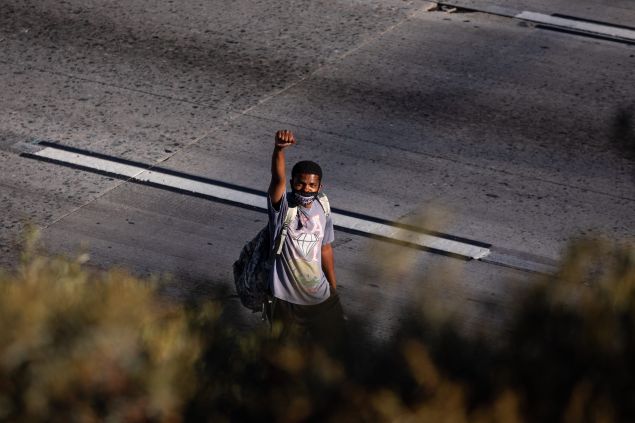 “There is a level of torment in it. It’s not as apparent when I’m in the middle of documenting the protests, but when I go back and look at the images that I’ve captured, it’s tormenting in a way because it’s like reliving the pain over and over. The image is stuck in my head,” documentary photographer Vanessa Charlot said. “I’ve seen cops beat women. I’ve been tear gassed. I’ve seen a cop shoot [a rubber bullet at] a protester. A lot of these things don’t make national news.”

Alexis Hunley, who has photographed protests for NBC News and Rolling Stone, spoke similarly: “I can’t be an objective observer. You’re protesting for my life and my family’s life. These are my neighbors. These are people that care about his [George Floyd’s] neck. Like everything that I shoot, it’s personal.”

Emotional connection, however, doesn’t distract from the work at hand, as photographer Joshua Rashaad McFadden, who has photographed protests for CNN, The Atlantic, National Geographic and The New York Times, reflects.

“It’s heavy and nearly impossible not to feel. I felt it! And in these feelings were the recollections of all the instances when I had been wronged as a Black man, the times I had been profiled and prejudged simply due to the color of my skin. Even though I have a job to do, I also give myself permission to experience these emotions in order to identify with the pain of the communities I enter.” Rashaad McFadden states, corresponding with Observer over email. “I give the subjects and the work, as a whole, the dignity I know it deserves. We are not always afforded that: dignity. The balance I hold between my emotions and the work—and the decision at times not to separate the two—is how I believe stories like this should be handled, with heart and authenticity. 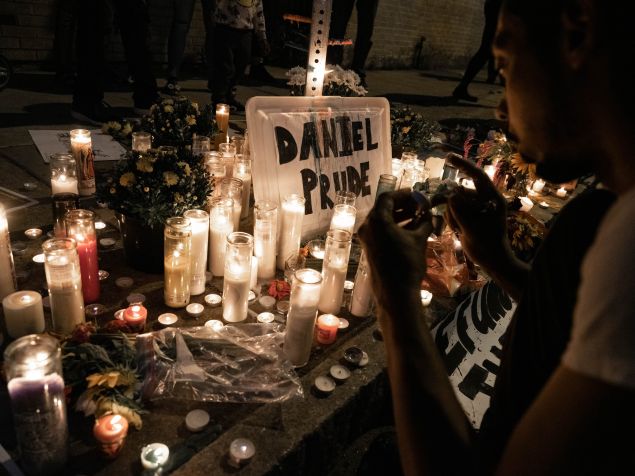 Utilizing this movement’s international presence, Black artists have been opening many avenues of dialogue regarding how to capture this moment. One of the subtopics has been the growing concern for anonymity. With the string of disappearances from the Ferguson riots, Black consumers have been more vocal about the importance of protecting the identities of protesters. This concern combined with the stressed importance of public mask-wearing to reduce the spread of COVID-19, Black photographers have been tasked with navigating the conflict of protection but also doing diligence to capture each moment to the fullest.

A consensus among photographers views the issue of anonymity as a chance not only to be creative but more mindful of what is being captured.

Hunley reflects how opinion of this discussion has progressed. “Initially, when that conversation was circulating the internet and social media, I was much more cut-and-dry like, “Oh, well, I’m only going to use images that blur faces or conceal identities. After several conversations, I’ve moved back a little bit from that very strong stance, and more of a holistic approach where I need to be more intentional and need to treat every process, every situation every photograph individually for what it is and what it’s showing,” Hunley said.

Photographer Vanessa Charlot, whose work has been published in the likes of The Oprah Magazine, Vogue UK, The New Yorker and Buzzfeed, echoes those sentiments and stresses the stakes: “I don’t want to put anyone in harm’s way, especially in a city like St. Louis, especially after the Ferguson uprising. I don’t want for my photographs to be used as a tool against my own community.”

I began to celebrate Juneteenth in my 20s when I landed my first teaching job as an English teacher at an inner-city high school in Houston, TX. Fast forward 15 years later, I'm still in awe by how resilient and amazingly beautiful we are in the face of adversity. It's something about a black woman's smile and a black man's stride. Although it's such a special day, I would venture to say that everyday we choose to laugh and live is our way of honoring the sacrifices of all of those ancestors who paved the way for us. . . . . . . . . . . . . . . #juneteenth #stlouis #protest #capturestreets #protesters #georgefloyd #icantbreathe #sayhisname #reportage #photodocumentary #blacklivesmatter #socialdocumentary #photojournalist #justiceforgeorgefloyd #burndiary #ig_global_people #worldface #streetphotographer #lifeportraits #documentaryphotography #documentaryphotographer  #thestreetphotographyhub #qwoc #streets_storytelling #reportagespotlight #magnumphotos #natgeo #blackculture

Another topic they consider when making their images is the idea of the “white gaze,” or photo documentation for the viewing pleasure of a white audience. Black creatives across social media have been condemning the continuation of the white gaze practice into BIPOC spaces, especially ones of emotional turmoil.

McFadden expressed his distrust towards white photographers capturing this moment based on his experience in Minneapolis.

“In Minneapolis, in the middle of a protest, I witnessed White photographers laughing and joking with local law enforcement as Black protesters were shot with rubber bullets. Black lives haven’t mattered since the onset of American establishment. So, excuse me for not trusting that they will handle our stories with care,” Rashaad McFadden said.

Charlot also reflects on this topic as she details an experience she had with a white  photographer, “I’ve had a white male counterpart tell me that I need to move because there’s a shot that he wants to get…I was like, This is a community. We are going through something right now, and I don’t want to create the space for you to put black pain on a public stage,” Charlot said.

However, Black photographers suggest if a nonblack photographer aims to capture the movement, they should learn as much about the Black community as possible by reading, studying and communicating with Black people.

“I would say study Black photographers and Black filmmakers’ work. Study before you go out there, especially if you are one of those people that is trying to understand more about who we are. Study how we talk, how we move, study our emotions and learn,” Dwyer said. “If you learn our culture, you would know who we are.”

Above all, Black photographers expressed the need of maintaining humanity when entering Black spaces, instead of focusing on how to profit from Black trauma.

“If your gut is telling you that it feels exploitative in some fashion or you’re profiting off people’s pain or building a portfolio. You don’t need to do this. You can support in other ways,” Hunley said.

Black creation is in a position to be recognized and respected as an equal beyond this cultural moment. As cultural consumers, we need to pay attention to Black artists and honor their work.

As Dwyer expressed: “If you want real change, tag us in.” 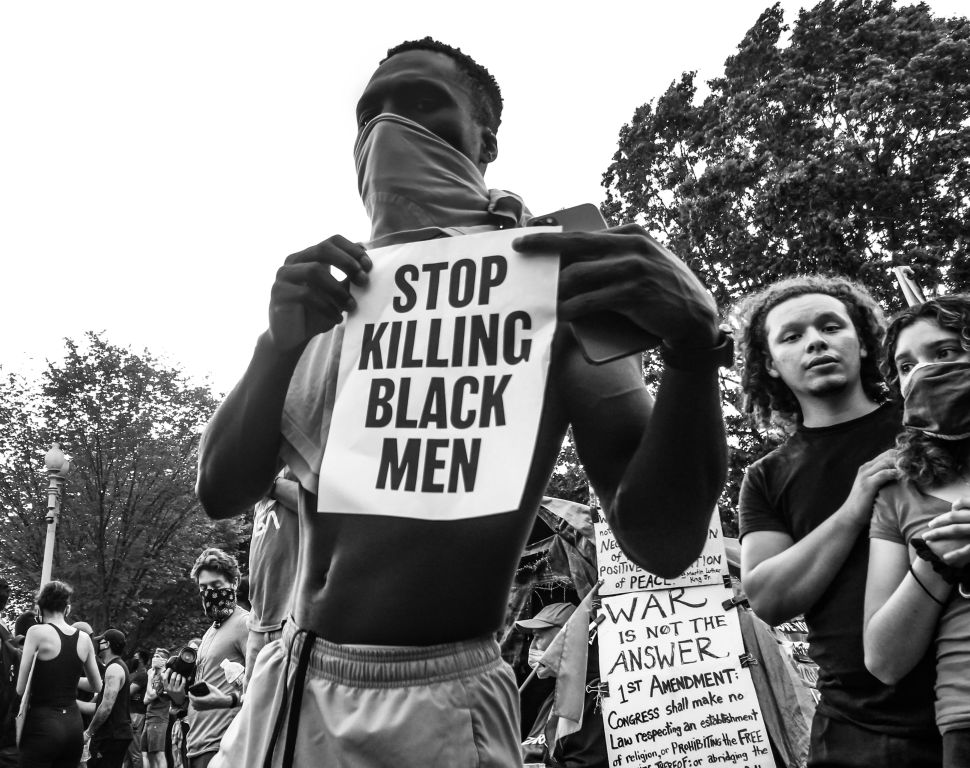