Chadwick Boseman left an indelible mark on modern cinema in his brief but brilliant career. Across 10 theatrical films that he appeared in, including Avengers: Infinity War and Avengers: Endgame, Boseman’s movies averaged nearly $770 million at the worldwide box office while inspiring fans the world over. His impact continues to be felt as fans process his shocking and untimely loss by returning to his inspirational films.

Reelgood—a streaming aggregator that tracks every TV show and movie available online—tracked the 20 most-watched movies Americans consumed from home this weekend across SVOD services like Netflix, AVOD platforms like Tubi, and via TVOD or rent/buy sources such as Google Play and iTunes. The data found that four out of the 20 most-watched movies have Boseman in the lead role. The Jackie Robinson biopic 42 claimed the third spot, Black Panther came in fifth, 21 Bridges sits at the 14th spot and Marshall caps off the list as the 20th most-watched movie in America this past weekend. 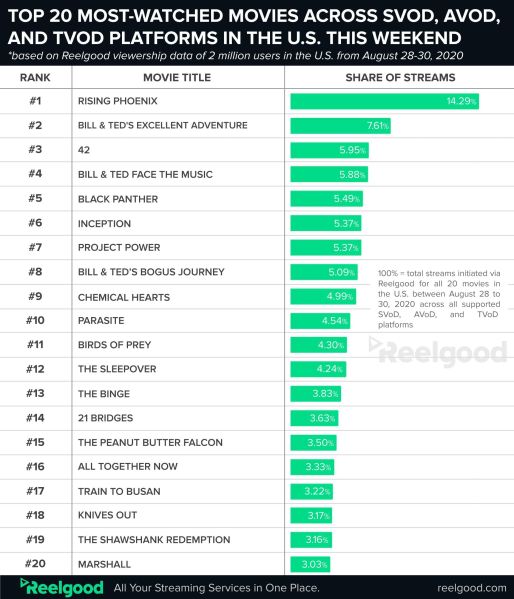 42 and Marshall are only available to watch online via rent/buy platforms, which means millions of viewers were willing to spend money for Boseman’s leading non-Marvel roles. Following his passing last Friday, the Disney-owned ABC aired Black Panther commercial free on Sunday night, drawing 6.1 million viewers as the top broadcast. Fans have taken to Twitter with watch-parties of Boseman’s films to pay tribute to the star.

Watching Black Panther on ABC is giving me the chills. I think I've seen it around 6-7 times now. It's really the best stand alone solo Marvel film in every way.

Chadwick you are one of my hero’s!I loved watching 42 & Get on Up but it was Black Panther that changed my life.Seeing a black superhero & all the beautiful black brothers & sisters got me so excited!I’ll always remember you & you’ll always be King T’Challa #wakandaforever 🕊 pic.twitter.com/AehJAu487u

for the longest time 42 was my all time favorite movie… it’s gonna hurt now watching it.
rip chadwick boseman 🥺💙 pic.twitter.com/1drPWPpnJY