Audiences are still understandably confused about how and where to watch Disney’s Mulan when it arrives on Disney+ Premier Access on Friday. Don’t worry, that’s a reasonable reaction. Fortunately, the entire process is much less confusing than you think. We’ve put together a handy dandy helpful guide to help explain everything you need to know. But, in doing so, we started to wonder which other upcoming Disney films might follow?

Movie theaters are slowly reopening across the United States, but the two biggest domestic markets (New York and Los Angeles) remained closed. We also don’t know if movie theaters will be forced to shut down once again should a surge in new COVID-19 cases occur, much like it did when China attempted to reopen movie theaters earlier this year.

Assuming Mulan performs well financially on Disney+ Premier Access, it’s not out of the question that Disney might want to repeat the process. Here are three upcoming Mouse House flicks that would be prime candidates.

Pixar’s Soul—which looks to be one of the most visually inventive films in the animated studio’s recent history—was originally scheduled to hit theaters in June. Unfortunately, due to the coronavirus pandemic, that didn’t happen. The film is now set to premiere on November 20.

The problem: it’s just two weeks after Marvel’s Black Widow debuts and the same day that Daniel Craig’s final James Bond film No Time to Die arrives. Not only does Disney not want to cannibalize its own audience, it likely doesn’t want to compete with one of the most anticipated blockbusters of the year (even if there isn’t a ton of audience overlap). March’s Onward was a fine example of Pixar emphasizing original concepts, but it mustered just $117 million worldwide before COVID-19 forced theaters to close. That’s far below Pixar’s typical standards.

Should Mulan put up big purchase numbers, Disney might consider lightening its theatrical load and freeing up the schedule a bit by rerouting the family-friendly Soul, which stars Jamie Foxx and Tina Fey, to Disney+ Premier Access.

Death on the Nile

Kenneth Branagh’s Murder on the Orient Express was PG-13, and Death on the Nile looks to be slightly more mature, so perhaps this might be a better fit on Hulu. But should Disney decide that its October 23 release date is no longer tenable, there’s a chance this star-studded sequel could make a pretty penny.

Murder on the Orient Express somehow earned more than $350 million worldwide against a $55 million budget, making it a small-scale blockbuster of sorts. Clearly, there’s an audience for these new-age reimaginings of Agatha Christie’s brilliant detective Hercule Poirot (we prefer Benoit Blanc).

Branagh’s series falls under 20th Century Studios, which Disney owns. With The Simpsons and various X-Men films enjoying a comfy home on Disney+, it’s clear that the former Fox label is not much of an impediment to the Magic Kingdom. 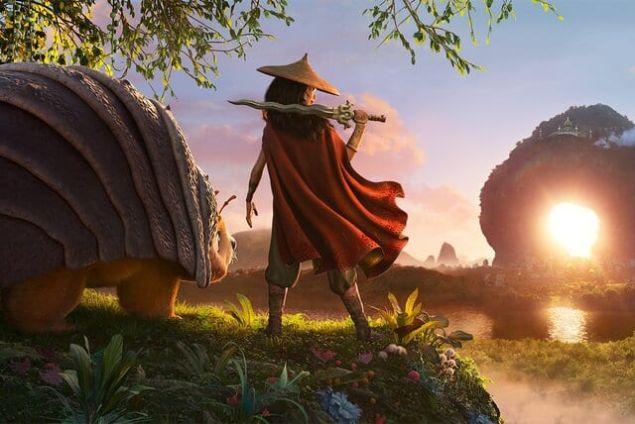 Raya and the Last Dragon

Originally scheduled for a November 25 release, Raya and the Last Dragon has undergone some behind the scenes shakeups in recent weeks. Last year, Cassie Steele and Awkwafina were announced as the animated flick’s stars at the D23 Expo. Now, Star Wars saga actress Kelly Marie Tran will replace Steele and the movie will arrive March 12, 2021. That’s just one week after Ghostbusters: Afterlife and one week before Sony’s Morbius, which is something of a squeeze.

The film takes place in a land called Kumandra, which is split into five different regions. There, a warrior named Raya searches for the last dragon in the world. It’s the exact type of animated fantasy that could emerge as a four-quadrant theatrical blockbuster or a convenient purchase on Disney+ Premier Access.

The pandemic has expedited direct-to-consumer’s succession of traditional linear entertainment. Viewing habits are changing and Disney—which was the first studio to embrace the internet ethos and sell entertainment on iTunes—could put themselves ahead of the curve yet again.