Under normal circumstances, movie studios will release the first trailer for their hopeful blockbusters six to eight months before the film arrives. Buzz is a valuable commodity in Hollywood and the sustained conversation an electric trailer can generate goes a long way towards securing a valuable opening weekend. Unfortunately, we do not find ourselves in normal circumstances at the moment. That is why the first trailer for Denis Villeneuve’s Dune is arriving just three months before the film is scheduled to hit theaters.

Villeneuve has admitted that, due to the pandemic, he is racing to finish his blockbuster adaptation of Frank Herbert’s classic sci-fi novel. Warner Bros. has scheduled Dune for a December 18 release, a highly-coveted holiday season rollout that has elevated the box office totals of Star Wars, Aquaman and other blockbusters in recent years. But given the landscape and Tenet‘s uncertain financial future, the late arrival of the first Dune trailer suggests that WB may ultimately delay the film into the safer waters of 2021.

SEE ALSO: ‘Enola Holmes’ Is Good Enough to Give Netflix a New Franchise

Until we know for sure, all we can do is review and analyze this first batch of footage for clues as to what kind of film Villeneuve hopes to deliver.

Fans of Herbert’s Dune novel understand the density of this intergalactic tale about the son of a noble family entrusted with the protection of the most valuable asset and most vital element in the cosmos. On the page, grand detail and a richly woven backstory can construct endless universes of fascinating fictional cultures. But condensing and translating all of that material to the screen has proven difficult in Hollywood history. Can Villeneuve succeed where others have failed?

What immediately stands out in this first Dune trailer is the sharp contrasting colors. The muted hues of the sweeping seaside vistas, the red-orange of the rolling deserts, the dull grays and dark blacks of our characters’ attire. Darkened silhouettes against the blazing sun suggest a power dynamic that leaves humans on the losing end against the elements. It’s fitting for the planet Arrakis, a world designed to snuff out the weak. Dune is an epic coming of age tale as young characters step into messianic roles; there is no room for weakness in this world. As the trailer notes, “Beyond fear, destiny awaits.” Dune will grapple with familial legacy and a calling that goes beyond our bloodlines.

Villeneuve has always been a sensory director interested in the fluidity and presence of our surroundings. Scenes that feature two characters talking will naturally draw focus to the dialogue and performances. But Villeneuve has a knack for using production and costume design, unique editing choices and musical cues to add layers to a given scene. Atmospheric tension has been his calling card of late and that holds true here in Dune. Each exchange is colored with the backdrop of danger, coded with sinister undertones. There is a lethal game afoot and Paul must navigate it with life-and-death precision to win. It’s the political jockeying of Game of Thrones set amongst the stars.

What’s also evident in our first real look at Dune is how masterful the presentation appears to be. The visual language of Villeneuve’s previous films have always conveyed information in the ways that his subjects and focuses are framed, lighted, and delivered. Here, we see several mid-shots and close-ups, putting the viewer into tight perspectives of our characters. Chalamet’s angular features as an actor are a gift, providing him with both a regal quality and a sense of wan vulnerability. Suddenly, among the blockbuster sequences, our viewpoint is widened and enlarged to capture the scale of the spectacle. The film clearly aims to inspire awe in its alien creation while still maintaining a character-first focus.

Warner Bros. may want Dune to spark a two-film blockbuster adaptation and an HBO Max spinoff, but the filmmaker may be interested in something a bit more esoteric than popcorn entertainment. This first trailer is so artfully composed, more reminiscent of his internalized dramas such as Sicario and Prisoners rather than the latest franchise. Though, of course, Dune looks to possess plentiful action to entertain the masses. The final product will be a sight to behold whenever it arrives. 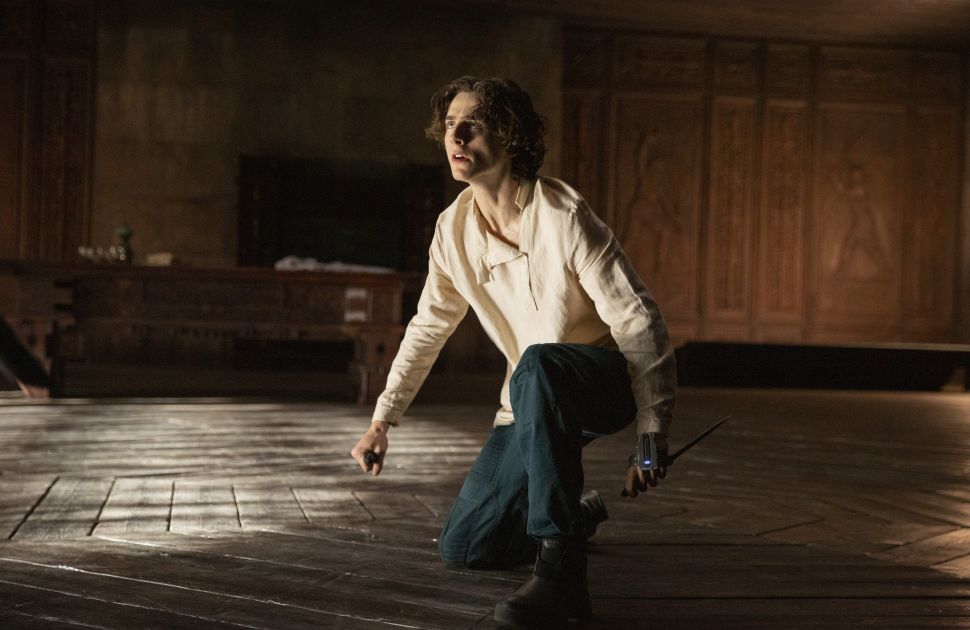