Normally, when Netflix acquires a feature from a major film studio, it’s because the movie was never going to work as a theatrical release. Often, studios use the streamer as a dumping ground for guaranteed misfires that would have cost them a bundle of money. That is why nominally high-profile pictures such as The Cloverfield Paradox (Paramount Pictures) or big-budget Mowgli (Warner Bros.) wind up as “Netflix Originals.” But that is not the case for Legendary Entertainment’s Enola Holmes—acquired in April due to the theatrical closure forced by the coronavirus pandemic—which feels as if it could have been the next successful YA big screen series under normal circumstances. Settling for Netflix’s next family-friendly franchise isn’t such a terrible consolation, however.

Both Enola Holmes and its rising young star, Stranger Things‘ Millie Bobby Brown, effortlessly radiate charm in a tale about Sherlock and Mycroft Holmes’ rebellious teen sister, a gifted super-sleuth in search of her missing mother. At just 16, Brown has already begun to modulate between the disarming smile-inducing appeal of Julia Roberts and the calculated edge of Natalie Portman. She is the driving force behind the film’s cheerful mystery, seamlessly delivering cozy and energetic exposition via precocious fourth-wall breaks.

After her mother disappears, Enola must reunite with Sherlock (Henry Cavill) and Mycroft (Sam Claflin), whom she hasn’t seen in more than a decade. The brotherly dynamic works well with both men stuck in the patriarchal past to varying degrees. Cavill feels right at home as a swarthy British aristocrat with a good heart, far more organic and charming with his own natural accent. Claflin tones down the fascist tones of his underrated antagonistic turn in the most recent season of Peaky Blinders for an appropriately wretched older brother with room to grow. But this is Brown’s movie start-to-finish.

Enola Holmes is not a carbon copy of Guy Ritchie’s big screen Sherlock Holmes films, but it boasts the same pithy, modernized light step. It may not be quite as visibly bold as Steven Moffat’s BBC Sherlock series, but screenwriter Jack Thorne (Harry Potter and the Cursed Child) and director Harry Bradbeer (Fleabag, Killing Eve) do a wonderful job of capturing that same thinking-out-loud visual aesthetic that turns exposition into more of a snack than a chore.

There’s no doubt that the 2010s have marked a cultural revival for the Sherlock Holmes archetype, reinvigorating both the direct property and the adjacent detective genre. Benoit Blanc (Knives Out) and Hercule Poirot (Murder on the Orient Express) are thriving at the moment right alongside Robert Downey Jr. and Benedict Cumberbatch’s super sleuth(s). Why not cheerfully expand the demographic with a fresh but familiar take?

I write this next sentence with the full understanding of its inherent irony: Enola Holmes is more in line with what I, a grown adult, wish Disney’s live-action films to be. It’s aimed at a slightly older demographic and not so dreadfully childlike that parents will be bored into their iPhones the entire time. It’s cheeky, yet innocent; uplifting without pandering.

“I must become something…unexpected,” Enola says to the audience when she realizes that solving her mother’s disappearance is up to her. In the era of intellectual property in which studios are mining their own libraries to repackage the same branded concepts over and over, I found myself unexpectedly enjoying Enola Holmes despite our increasing cultural exhaustion with the property. The fourth-wall-breaking asides become tiresome at a point and the mystery isn’t quite as fetching as the film thinks it is (nor is the puppy love romantic dynamic sprinkled throughout). But the movie stands tall when its heroine denounces her provincial older brothers by accurately pointing out that they don’t wish to change the world because the world suits them as is.

Enola Holmes isn’t a revolution or revelation that is going to forever alter the course of cinema, but it is enough of a charming and cheerful change to give Netflix a new franchise. 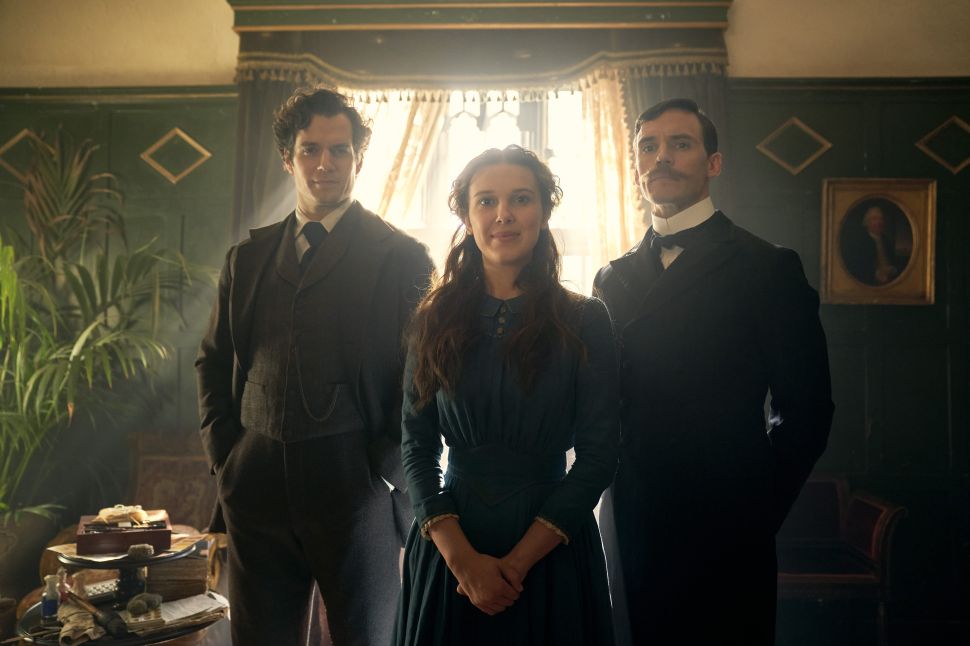