The Old Vic’s In Camera series—actors before an empty auditorium streamed live from London—is bringing theater back to life. In the previous installments Lungs and Three Kings, stage-savvy stars Matt Smith, Claire Foy and Andrew Scott seized our attention with crisp, text-forward plays, economical movement, and few or zero props and set pieces. Acting a two-hander from a six-foot remove or making love to the lens, these TV-theater hybrids proved the intense, vicarious pleasures of a body in space vibrating with language, flaying itself in real time.

With the transfixing and immensely satisfying account of Brian Friel’s Faith Healer (through Saturday), the approach has grown meat on its bones. Now actors nestle in well-worn easy chairs by scuffed tables cluttered with beer or whiskey bottles, dressed in dowdily effective clothing (sets and costumes by Rob Howell). Now lights (by Tim Lutkin and Sarah Brown) isolate actors in a penumbral aperture of memory, plunging banks of empty seats into darkness, or caressing wild-haired Michael Sheen in a ghostly halo with a well-placed single source from behind.

Sheen (Good Omens), an actor capable of volcanic zeal and rich musical vocalism, plays the “Fantastic” Frank Hardy, itinerant layer-on of hands, who we learn is often drunk and in self-exile from his native Ireland. Frank travels to backwater villages in Wales and Scotland with his miserable wife Grace (Indira Varma) and unctuous, Cockney manger Teddy (David Threlfall). The trio pulls up to a sorry town, occupies a rented hall, Teddy plays a Fred Astaire record of “The Way You Look Tonight” to any poor souls assembled, and they wait for Frank’s magic to happen.

If magic it is. Or miracle. Or con. Frank seems to have once believed he had a gift for restoring lamed legs, twisted fingers or other physical maladies, even as he fails to minister to his own diseased soul. Any trust in his divine talent has long rotted into cynicism and contempt. Frank argues viciously with Grace, who tries to carry their child to term. Freddy remains the grotesquely cheerful enabler and go-between. Frank loses both parents while on the road. Some nights go well, and God seems in the room. At last, having tapped out the market in Scotland and Wales, they turn to Ireland for new marks. At a bar lounge outside the County Donegal town of Ballybeg (Friel’s fictional, frequent setting), Frank, Grace and Teddy run into a wedding party comprised of four young men who will have a fateful impact on Frank’s life.

Friel tells this narrative in fragmented, overlapping monologues by the protagonists, with discrepancies between them that create the warp and weft of both truth and mystery. Over about 130 minutes we hear first and last from Frank and in the middle, one section by Grace and Teddy each. The picture that emerges in this haunted sonata is at once mystery play, narrative riddle, and Passion allegory overgrown with pagan weeds. Tonally, the piece veers from bleak, existential confession (Frank) to the utter bereavement of Grace, and the bitter comic relief of seedy survivor Teddy (Threlfall guzzles several pints of lager and times his burps and gurgles like a master bassoonist).

The acting, under Matthew Warchus’s patient, unflinching direction, is uniformly superb, with Sheen allowed the most latitude for rhetorical and physical flourishes, his bushy, graying beard, greasy quarantine locks, and madman’s eyes creating a mixture of homeless drifter and Old Testament prophet. Frank chants the names of hamlets from their journeys, his voice booming off the walls of the Old Vic. “Llangranog, Llangurig, Abergorlech, Abergynolwyn, Llandefeilog, Llanerchymedd…” We don’t know these places, but as rolled around in Frank’s mouth, they seems to summon spirits and occult forces.

If Faith Healer‘s not sold out, get a ticket immediately, as a break from bad news and balm for hurt minds. Sheen’s self-lacerating sonorities, Varma’s embittered sinner-saint, Teddy’s music-hall irreverence, all encased in Friel’s sublimely tuned prose: Faith Healer holds magnificent treasures of poetry and emotion, if you’re open to receive it.

One unintended aftereffect of Faith Healer, however, is a crimson curtain of blinding rage. The palpable thrill of Friel’s numinous phrases and Sheen’s blazing cadences gives way to disgust at how U.S. stages lie dormant and dumb. How is it possible, from New York to Chicago and Los Angeles, we can’t plop an actor in front of a camera with a sturdy text and make it worth a ticket? Ron Cephas Jones in August Wilson’s How I Learned What I Learned. Sandra Oh in Theresa Rebeck’s Bad Dates. Michael Urie in Doug Wright’s I Am My Own Wife. Anything by Dael Orlandersmith, Wallace Shawn or John Leguizamo. I could go on; so could you.

And yet, due to comorbidities related to unions and a gutless policy of furlough-and-freeze, we sit paralyzed, unable to walk or talk, pitied by the world. Netflix and Amazon pour treasure in the laps of English theater funds and it’s getting harder to blame them. At this point, the lack of ideas at the top levels of American theater is a global embarrassment on the order of a maskless flash mob in a Florida Target. We have never seemed more broken, helpless, and faithless. 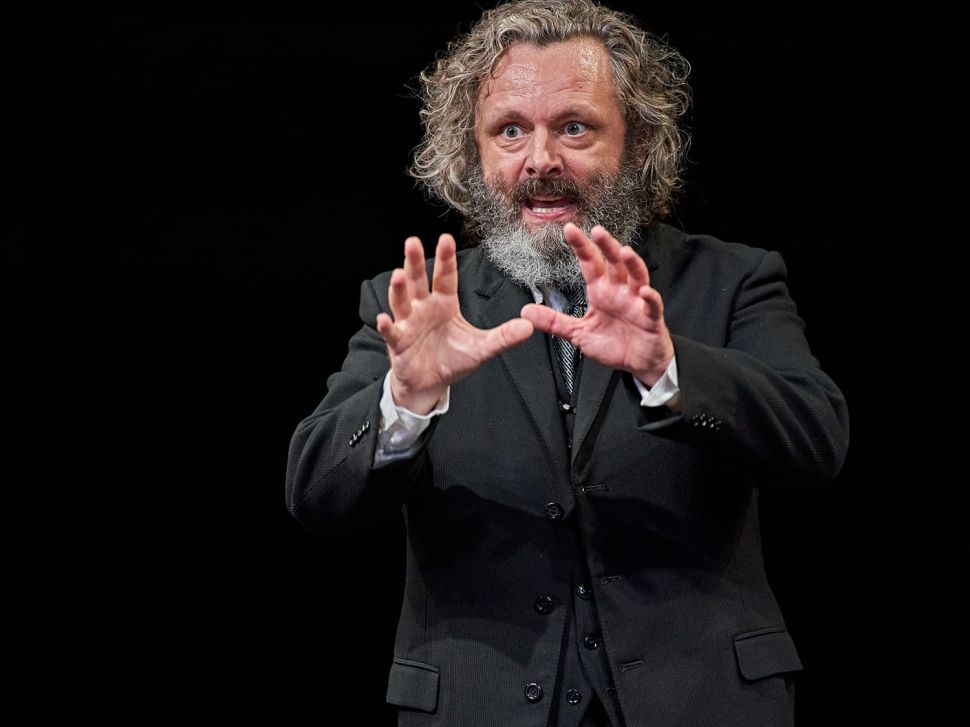