You wouldn’t be faulted for thinking it’s still spring, but we’re entering fall. While many readers quickly adapted to online sales and eBooks this spring, publishing wasn’t immune to the chaos of 2020. Many spring titles moved to summer, crowding a season that was already dense. Publishers think long and hard about fall releases during a presidential election year. This is an eclectic season of diverse, provocative and thoughtful titles. There are big, highly anticipated novels, including Don DeLillo’s The Silence, which eerily considers a pandemic, the translation of Elena Ferrante’s The Lying Life of Adults, as well as follow-up sophomore fiction by acclaimed young writers. Your summer of anti-racist reading shouldn’t taper off as the weather turns. Powerful essay collections, serious nonfiction, and biographies of activist artists will move you to action. Give yourself the chance to think deeply and find solace in reading this autumn.

In the follow-up to her 2016 National Book Critics Circle’s John Leonard Prize, PEN/Hemingway Award for first fiction and American Book Award winning debut Homegoing, Yaa Gyasi’s Transcendent Kingdom concentrates on a family who immigrated from Ghana to Alabama. The protagonist, Gifty, lives what one might consider an American dream. Having succeeded academically, she is now a neuroscience doctoral candidate at Stanford University. Yet her brother Nana struggled with opioid addiction after a sports injury and subsequently died of an overdose before completing high school. With her hopeless mother resigned to bed, Gifty struggles to find answers to her family’s loss through medicine and a faith she’d long abandoned in this searching, beautiful novel.

Upon publication in 2014, Claudia Rankine’s poetry collection, Citizen: An American Lyric, became an essential classic for its examination of race and visibility in America. She returns this fall with a new genre-breaking arrangement of essays, images, and poetry. Just Us (don’t fail to note the title’s play on words) confronts white supremacy through direct engagement. On planes, in the voting booth, at dinner parties, she invites us to join her in conversation with others. Within the book, you may recognize her powerful New York Times Magazine piece “I Wanted to Know What White Men Thought of Their Privilege. So I asked.” Her words urge us to stick to the uncomfortable situations so that we can find our way beyond this volatile, vicious moment and our deplorable history.

What Are You Going Through by Sigrid Nunez (September 8)

Following up her 2018 National Book Award winning novel The Friend, Sigrid Nunez’s What Are You Going Through addresses the expansive nature of empathy and grief that marked her previous novel. With a very direct premise (one old friend visits another old friend who is struggling with terminal cancer), Nunez creates a book that explores mortality, legacy, and the arc of friendships and relationships. Writing and the limits of language also weave through this intimate portrait. Nunez is both direct and yet incredibly subtle as she traces choices we make when faced with questions of sustainability and end of life care in this powerful novel.

If Then by Jill Lepore (September 15)

Harvard professor and New Yorker staff writer Jill Lepore is known for fascinating entry points into American history. Having examined Wonder Woman, Jane Franklin and slavery in 18th-century Manhattan, Lepore now turns her gaze to a forgotten corporation whose impact is all too relevant in the lead up to the presidential election. Long before the data mining and media manipulation of Facebook, Amazon, Google and Cambridge Analytica, the Simulmatics Corporation found inspiration in psychological warfare to generate chaos and skewer public perception. In If Then, Lepore skillfully argues that their use of technology brought us to this current political climate.

A searing look at a nation unraveling in the wake of 9/11, the Pulitzer prize (Disgraced) winning playwright Ayad Akhtar’s Homeland Elegies is both a wrenching and deeply personal novel. Written in the wake of his mother’s death and the election of Donald J. Trump, Akhtar was seized with a desire to memorialize the homelands of his family through what felt like elegy. This searching, sorrowful book honors Akhtar’s Pakistani heritage as a child of immigrants and also wrestles with the land of his birth, the United States. At the heart of this passionate family drama is a father and son attempting to address relentless wounds that won’t heal.

Acclaimed and beloved novelist Marilynne Robinson published the Pulitzer Prize-winning Gilead in 2004. It was her sophomore effort. Many say that her first novel, Housekeeping (1980) was a masterpiece, but I would argue that the searching, soulful Gilead and her following three novels are as well. Her latest, Jack, centers around the prodigal son of Gilead’s Presbyterian minister and his romance with Della Miles, another child of a minister and a high school teacher. Their interracial romance offers Robinson the opportunity to interrogate American history and social justice with her formidable mind.

This summer, in the wake of the murder of George Floyd and Breonna Taylor, many white readers flocked to the book White Fragility to examine their inability to confront their complicit participation in racism. Ruby Hamad’s White Tears/Brown Scars should find as many if not more readers. Weaponized white femininity has assisted white supremacy and the patriarchy throughout history. Hamad offers a comprehensive look at the ways in which women of color have been dismissed by society, beginning with the Atlantic slave trade and moving forward to the present, considering the treatment of Alexandria Ocasio-Cortez and a second look at The Hunger Games. This book should be considered required reading.

Leave the World Behind by Rumaan Alam (October 6)

With his last two novels (Rich and Pretty and That Kind of Mother), Rumaan Alam made readers wonder how a man could so fully inhabit the minds of women. In Leave the World Behind, readers wonder how Alam predicted our contemporary dystopian anxiety. In this domestic drama-turned-horror, a white, Brooklyn family of four takes an indulgent vacation at a luxurious home rental. With their lengthy grocery lists and technology addictions, they’re striving for a bourgeois life just out of reach. Just as they sink into a certain calm, unexpected visitors interrupt their plans. With lush details that sink under your skin, this is a novel whose confrontational impact lingers.

The American singer-songwriter, Woody Guthrie enjoys a timeless success. Yet, his well-known phrase, written on a guitar, “This machine kills fascists,” resonates more than ever. In his intellectual biography of Woody Guthrie, the 19th- and 20th-century American literary scholar Gustavus Stadler concentrates on Guthrie’s emphasis on intimacy as a fundamental means to confront bodily shame, uncover the beauty and power of sexuality, and concentrate political struggle. This compelling focus sheds new light on the folk hero known for “This Land Is Your Land.” Breaking conventions long before his time, Guthrie was an iconoclast whose legacy may grow even more in stature through this crucial biography.

A 2019 honoree of the National Book Award’s 5 Under 35, Bryan Washington rose to critical acclaim with his heartfelt and celebrated short story collection Lot. His first novel, Memorial, is also set in Houston. There we meet Mike, a Black daycare teacher, and Benson, a Japanese American chef at a Mexican restaurant. They’re a young couple at a crossroads, unclear what keeps them together. A family crisis brings Benson back to Osaka just as his mother arrives for a visit. For Mike, his boyfriend’s mother proves to be a surprising companion; at the same time, Benson finds himself on an unexpected journey of self-discovery. Pushing at the limits of love, this novel filled with food and humor offers deep vulnerability and joy.

The Power of Adrienne Rich by Hilary Holladay (November 17)

The time has come for a biography worthy of Adrienne Rich, whose phenomenal poetry was only matched by the bravery of her prose. Hilary Holladay’s The Power of Adrienne Rich arrives at a moment when feminism is under critique. When Audre Lorde (who will also be celebrated this fall with the reissue of The Cancer Journals and a collection of selected works) championed intersectional feminism in the 1970s, there were many white feminists who cowered at the challenge of examining multiple forms of discrimination at once. For Adrienne Rich, there was no fear. Acknowledging that Rich’s own endless search for selfhood was at the root of her curiosity, Holladay depicts her ongoing work with language—transcending genre—to uncover what it means to be a person and belong to a community.

The Age of Skin by Dubravka Ugresic (November 17)

Looking beyond the United States remains critical—in large part because of the sense of isolation that Americans feel now. Readers should remain on the lookout for new voices to redirect our critical gaze and consider a different point of view. One of Europe’s most influential writers, Croatian exiled author Dubravka Ugresic scrutinizes the aspirations and nightmares of modern life in her essay collection The Age of Skin. Looking at tattoos and body modification, World Cup chants, the preservation of Lenin’s corpse and films such as La La Land and Dawn of the Planet of the Apes as well as extreme nationalism and the crossover between politics and crime, Ugresic infuses the gravity of her work with humor. 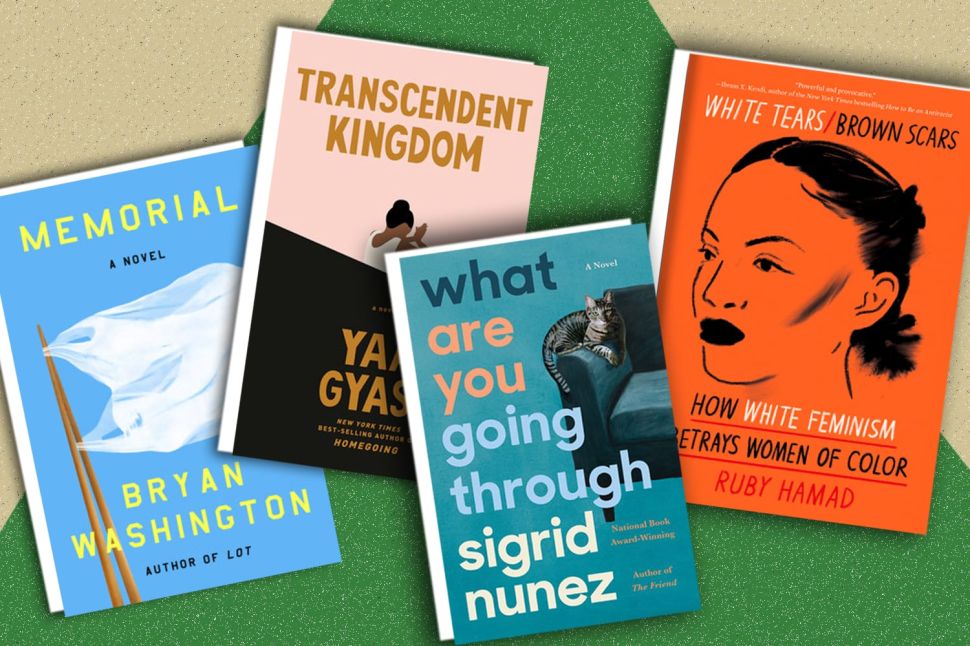