With all the recent upheaval at WarnerMedia, from executive shakeups to corporate transitions and this whole ongoing pandemic, we’re willing to cut the global entertainment conglomerate some slack. But there’s a difference between deliberate and methodical business practice and blatant tomfoolery (shout out to Ron Swanson for that word choice). Specifically, I’m referring to the three months it took for the animated series Harley Quinn to receive a Season 3 renewal following its most recent finale.

Sure, fledgling streaming service HBO Max was busy this summer absorbing all of the original programming from DC Universe, Harley Quinn‘s initial home. But if Max, which offers a great selection of programming yet has struggled out of the gate, wants to compete with the Netflixes of the world, it needs to continue making the right choices. Lining up Harley Quinn, which stars Kaley Cuoco, for another new season falls squarely into that category.

Harley Quinn represents a low risk-high reward investment for the streaming service. As was argued during the show’s hilarious panel during DC FanDome last month, the series is “super cheap to make” and the character “plays well internationally.” Though animated production costs have risen over the last decade, certain series can still get away with six-figure episodic budgets as opposed to the $15 million-per-pop HBO dropped on the final season of Game of Thrones. Harley Quinn isn’t a barebones undertaking by any means, but it likely costs a fraction of what HBO Max is spending on Ridley Scott’s gonzo sci-fi extravaganza Raised by Wolves.

For such a well-received and popular series that currently holds a 94% on Rotten Tomatoes and an 82 on Metacritic, ordering more episodes of an inexpensive critical darling was an obvious decision.

Then, of course, there’s the small matter of Harley Quinn being a bonafide hit with audiences. Long-running streaming series have less value via SVOD platforms than linear as they are less likely to attract new audiences. It’s one reason why Netflix loves to cancel shows before they reach their third seasons.

However, Harley Quinn is receiving a major boost by upgrading from the relatively niche DC Universe service to the much more expansive HBO Max platform. Even during its time in the minor leagues, it was a top series among the crowded comic book genre. According to Reelgood—a streaming aggregator that tracks every TV show and movie available online for its 2 million-plus U.S. users—Harley Quinn has ranked among the top 30 comic book TV shows across all streaming services since December. That’s a steady and reliable level of engagement, particularly in this fragmented viewing ecosystem. 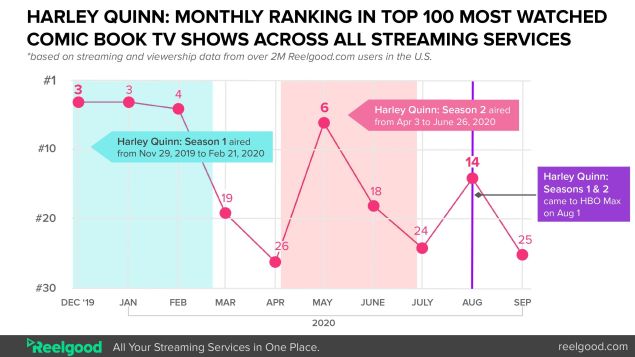 But wait, the numbers get even better. Since the pandemic began in March, Harley Quinn has ranked among the top 10 most in-demand digital series in five of the last six months, according to data firm Parrot Analytics. In fact, demand for the series is 24.32 times the demand for the average show worldwide over the last 60 days. Just 0.2% of all shows in the market have this level of demand. In that time frame, Harley Quinn ranks as HBO Max’s 8th most in-demand series overall domestically. In the absence of confirmed viewership ratings, it’s still clear that Harley Quinn has left an impressive footprint with both U.S. and international audiences. It has a big enough following to justify additional seasons.

But most importantly, Harley Quinn is arguably the single best piece of screen content DC has produced in the DCEU era. Where the film franchise has suffered from jarring tonal shifts and some of the TV series have been too insular for their own good, Harley Quinn is proudly self-confident in its own ludicrous ambitions.

With a frenetic and kinetic energy, the show plows ahead from joke to joke and episode to episode with the forceful adrenaline of a comedian on Adderall. It’s unabashedly ridiculous yet in its own specifically refined way that evokes the antics of an R-rated Looney Tunes with the self-aware meta humor of a higher IQ Deadpool. Creators Justin Halpern, Patrick Schumacker and Dean Lorey have somehow infused the DNA of Jerry Seinfeld’s stream of consciousness with the sharp and vulgar observational skills of Joan Rivers.

The show is built around Harley picking up the pieces of her life after her breakup with the Joker—an emotionally turbulent scenario we can all relate to minus the acid-spewing flowers and costumed vigilantes (unless you’re into that; no judgment). The relationship building Harley Quinn manages to achieve in two seasons, particularly between Harley and Poison Ivy, is nothing short of remarkable. Get out of here Ross and Rachel because television has found its very best Will They-Won’t They dynamic.

Renewing Harley Quinn for a third season was an obvious move given the relatively low cost it represented for HBO Max, the growing popularity it has generated, and the surprisingly great quality it has delivered. But just because it was obvious doesn’t mean HBO Max doesn’t deserve credit for making the right decision, even if it came later than we would have preferred. As the streamer navigates its embryonic stages of life and hopes to one day challenge the incumbent market leaders, it is small moves like this that will put them in position to succeed long-term.