Syrine Chalala’s inspiration came from a plague of locusts. The co-founder of the insect protein company nextProtein was working for the U.N.’s Food and Agriculture Organization in Madagascar when massive swarms of insects began decimating crops. The plague could only be warded off by pesticides, which made the famine especially heart-wrenching. Because of the harsh pesticide treatments required to kill the locusts, she explained, farmers were left with “piles of cricket that they weren’t able to consume.”

Here’s this cheap and plentiful protein source, she thought, but it’s going to waste. After reading up on the FAO’s research on insect protein, Chalala decided to explore the possibility of a company of her own.

She and her entrepreneur husband thought at first the answer might be bug burgers or cricket protein bars, but Chalala quickly realized that that particular market was far too limited. Most western consumers won’t eat bugs, it turns out. So they began looking into the animal feed side of the industry, and that led her to black soldier flies. In 2010, nextProtein was born.

Today, the company’s headquarters and research department are located in Paris, France, while the production happens in Tunisia. There are about a dozen other companies working on making animal feed alternatives and pet food out of black soldier fly larvae, spread across the globe.

While the soldier fly protein industry is still very young, scientists have been studying these insects since the 1980s and even earlier, according to Jeffery Tomberlin, PhD, an entomologist who teaches at Texas A&M University and is also one of those black soldier fly larvae prospectors. His company, Evo Conversion Systems, was founded in 2016. They produce the protein and also sell some of the equipment to other companies.

The potential to stake that claim is pretty big. The global population is expected to hit 9.1 billion by the year 2050, which means many more mouths to feed but with far fewer resources. Soldier flies are one very good solution. They’re a highly efficient and nutritionally sound protein source that can be produced with no waste, a low carbon footprint and massive food waste benefits.

The sheer amount of protein that can be produced by a single colony of soldier flies is impressive. Explained Chalala, “in 100 square meters of insect farming, we’re able to produce the equivalent amount of protein as 100 hectares of soybean.”

Even though some humans may be squeamish about eating insects, chickens and pigs are not so picky. “We’re talking about feeding animals with something that they eat naturally,” Chalala said.

Here’s how it works: Adult soldier flies lay eggs, stored in large trays until they hatch into larvae. The larvae are fed on a diet of farm waste until they’re big enough for harvest. For nextProtein, the feed is primarily fruit and vegetable scraps which they source from around ten local farmers in Tunisia.

Just exactly what the soldier fly larvae are fed could turn out to be pretty crucial for the environment. Soldier flies can eat anything, even manure, so the black soldier fly could someday be used by the industry to reduce consumer food waste, that is, leftovers from restaurants or even your trash can.

Consumer food waste is a much larger contributor to the massive problem of food waste than what’s leftover on farms, at least in the U.S. where farms often have secondary markets for those ugly tomatoes or bruised apples. For now, however, consumer food waste isn’t an option for the industry.

“I don’t know if you recall mad cow disease from the 90s,” explained Chalala, but the outbreak, which could be traced in part to animal feed contaminated with the parts of other infected cows, led regulators to be very strict about what farmers can and cannot feed to livestock.

As a result, both the industry and the regulators approving these products want to be very careful about what’s fed to black soldier flies. “These are the regulations that we’ve been given,” explained Tomberlin, who wants to see companies like his proceed very cautiously to avoid any food safety scares.

No matter what these flies are fed, the way in which they are raised is a closed-loop system, which means everything is used and there is practically no waste. That’s a huge boon for sustainability, said both Chalala and Tomberlin. In fact, nextProtein even uses the fly’s waste when separated out to make a fertilizer, which it also plans on selling.

Once the larvae are harvested, nextProtein grinds them into a powder made up of 60-70% protein, according to Etienne Raynaud, nextProtein’s Director of Strategy. Production outputs vary but one study found that a colony could produce 140 grams of protein-packed larvae per square meter each day. The powder is then sold to animal feed ingredient companies, who use it to make fish feed and food for chicken and poultry.

Aquaculture feed makers are especially interested in soldier fly protein. “It’s the closest nutritional profile to fishmeal,” explained Chalala, and with many wild fisheries declining in population, the rapidly growing aquaculture industry also has a rapidly growing need for fishmeal to feed their fish.

Yet out of the 20 million tons of fish caught each year for fishmeal—fish like anchovies, sardines and mackerel—70 percent goes to feed farmed fish when virtually all of that fish could be used as food for humans. With the global demand for protein expected to vastly increase by 2050, new protein alternatives like black soldier flies that offset demands for other proteins could help alleviate the burden of that demand.

Black soldier fly larvae can also be fed to pork and poultry, but for now will be used mostly as a supplement to soy and corn feeds. The poultry and pork markets are a bit trickier to crack, as corn and soy are well-developed commodities with highly effective lobbying organizations.

“If you tell the soy cooperative of America that we’re going to replace you? That’s the last enemy you want in Washington, D.C.,” quipped Tomberlin. So for now, fly larvae will be used as more of a way to boost soy and corn formulations rather than a substitute for them. Also, because feed formulators are so secretive about their concoctions, it’s tough to know what the exact proportions will be, added Chalala.

Still, the potential to someday offset at least some soy and corn production is there. According to Chalala, a future where livestock is fed on bug protein could decrease the massive global demand for soy and corn, a demand that at least partly drives deforestation in places like Brazil.

The biggest challenge facing these companies at the moment, however, is the fact that none of them have the necessary production capacity to make their fly protein at scale. At least for now. nextProtein just scored around $12 million in its most recent round of funding, which will be used to build an expansion to their production facility in Tunisia.

Why Tunisia? Labor and building costs are lower, the climate is right for soldier flies and the facilities are located quite close to the farms that supply the waste.

Of course, the pandemic has caused a bit of a hiccup in Chalala’s plans. “2020 was kind of supposed to be the year of revelation,” she said, though things didn’t quite turn out that way. “It was the year of a different kind of revelation,” she mused. Still, 2021 is going to be a big year for the sector, she continued, and construction on their expansion in Tunisia is already underway.

As for Tomberlin, he is most proud of his company’s unique technology that allows scientists to put the flies to sleep and wake them up as needed so you can have more control over the fly’s life cycle. He’s also a diehard fan of the taste of black soldier fly protein, which can shift ever so slightly depending on what you feed the larvae. Sure, cricket powder is good, if you like that sort of thing, said Tomberlin, with a shrug. “It doesn’t hold a candle to black soldier fly.” 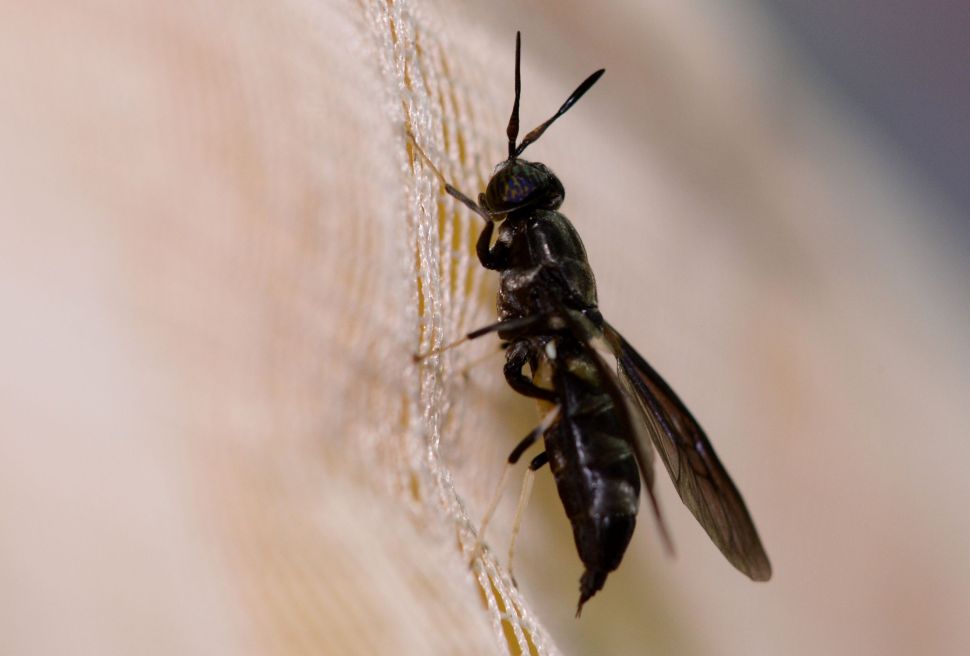