The HBO Max show Infinity Train is billed as an anthology. Each of its Books (read: seasons) follows a new passenger on the titular locomotive attempting to work through trauma by traversing the infinitely expanding train and completing objectives in intricately themed cars. The passenger is allowed to leave the train once they’ve experienced sizable emotional growth. This process is visualized by the numbers on a passenger’s hand, which decreases as the passenger grows and increases when they go in the opposite direction.

We’ve spent the last two Books watching protagonists enter the train and gradually remedy their emotional trauma. But Book 3 of the show, which was created by animator Owen Dennis, is different, asking: what happens if a passenger doesn’t want to leave the train? What if they have no interest in emotional growth, deftly avoiding the show’s core moral directive? What happens if you’d rather live in your own world than acknowledge the collective world that your presence contributes toward?

Infinity Train Book 3’s laserlike focus on the character’s narrative makes for the show’s most compelling Book yet. This change means the series is less interested in providing an explanation for the train, granting more space to focus on character dynamics.

Book 3 is led by Grace (Kirby Howell-Baptiste) and Simon (Kyle McCarley), who together head the Apex, a motley cult of child passengers on the train. They’re a dynamic duo, because Grace and Simon have mistakenly gleaned that to survive on the train, you need to have the highest number. In practice, this belief means the Apex needs to perform heinous acts, such as brutalizing the train’s denizens. It’s rather dark for a kids show that used to run on Cartoon Network, but its story is told expertly.

I began Book 3 a smidgen weary of Grace and Simon. After their stint as antagonists during Book 2, I was unsure if I’d find either character enjoyable to watch. They quickly grew on me once the other two main characters, Hazel (Isabella Abiera) and Tuba (Diane Delano), were introduced.

Hazel and Tuba are ostensibly a denizen and passenger of the train, respectively. The Apex leaders encounter the two after being separated from their Apex cohorts. Encountering this duo has different effects on both Apex leaders. Simon further doubles down on his misguided beliefs, while Grace begins to question what’s right.

The diverging paths interrogate their status quo and codependency. Prior to this encounter, Grace and Simon were shown to have a working system together. Watching their relationship dissolve as Hazel and Tuba’s presence makes them question themselves is incredibly effective. It how tenuously those relationships were originally built, existing in the Apex’s bubble of forced ignorance.

One of the best elements of it comes from the subtextual dynamics of Simon and Grace’s relationship. It’s never said that Simon has an unrequited love for Grace, but he blushes frequently around her and is devoted to what they share together. All of this speaks to Infinity Train’s character-driven priorities. The titular train is a setting; the show is concerned with how these people interact.

That goes for Hazel and Tuba, too. While both characters catalyze Grace and Simon’s respective arcs, they have their own compelling narrative fish to fry. Hazel has a charming arc where she asks what it means to fit in. Her number suspiciously doesn’t light up like other passengers; does that diminish her? She’s just trying to figure out what to do as a young girl. How can she fit into what’s expected of small children, while staying true to herself?

Then there’s Tuba, a denizen of the train. She’s similar in appearance to a gorilla that has been equipped with two lethal tubas. Like all denizens, she speaks English. Though physically intimidating, Tuba is quickly revealed to be a big softie that has adopted Hazel as her daughter.

Unfortunately, Book 3 seemingly traded masterfully crafted characters for the zany exploration found throughout previous Books. There were some enjoyable train cars that served as the stages for episodes like the “Debutante Ball Car” and “The Color Clock Car,” but these were few and far between. Cars seldom feel as comedic as their Book 1 and 2 predecessors. Cars are now used primarily as large-open settings. Book 3 is rather dark, making that absence more notable, as there are fewer moments to find mental respites from the drama.

Conversely, the absence of these spaces bodes well for Infinity Train’s ability to sustain itself across multiple seasons. By focusing on the life of a specific character, Infinity Train proves it doesn’t need the train to make a compelling narrative. Additionally, this means Book 3 has transformed the Infinity Train into a lived location. It’s no longer just a transitional space to deal with your issues. The train has become a setting complete with its own internal culture and ongoings.

Much like how most great sci-fi worlds find their most memorable narratives in an extended universe setting, Infinity Train has proven it can remove elements and remain a spectacular show. Maybe taking on other mediums like video games and books next?

Nevertheless. It’s been three books since the Infinity Train first departed the station. In that time, the show has grown into its own, developing a compelling world and internal mysteries that will draw you in with a masterclass in character development to fuel your drive to keep going. Though the memorable cars have been sidelined for now, the train has no reason to slow down. 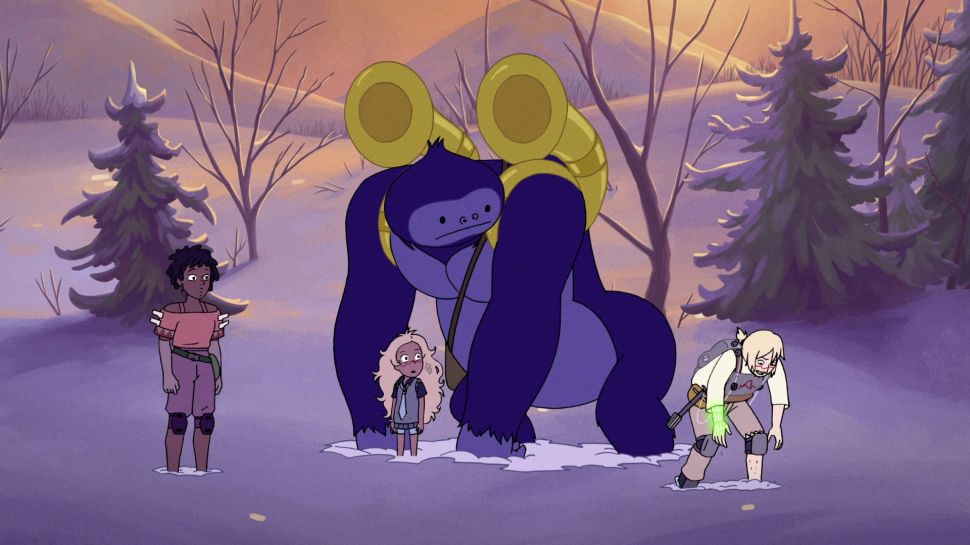