Memoirs can be a divisive genre. They’re a hard sell within the industry. While beloved memoirs (Wild, The Liar’s Club, I Know Why the Caged Bird Sings for example) stay with you always, many others are easily forgotten. Deeply subjective, unless you’re a celebrity or have lived a truly exceptional life, it’s hard to justify the space on a bookshelf. Yet for truly innovative and insightful writers, this genre provides a fascinating place to twist perceptions of subject. With her new book, Not a Novel: A Memoir in Pieces, German author Jenny Erpenbeck subverts conventional memoir to explore the ways in which writing unpacks an awareness of the multiplicity of selves, and in doing so, questions who deserves a spotlight and why.

Erpenbeck was born in East Berlin roughly six years after the Berlin Wall was erected. Acclaimed author of novels such as Go, Went, Gone and The End of Days, she was 22 when Germany reunified in 1989. Overnight, she passed through the fallen Iron Curtain, leaving behind a communist regime to participate in a free market as a young adult.

During a time of rising far-right politics, closed borders, and increasingly rigid nationalism, the shift experienced by East Germans appears as an uncommon assimilation. For Erpenbeck, borders were never an abstract construction. She grew up in a high-rise building amidst the ruins left by World War II, her home not far from the wall. She was free to explore abandoned museums where, as she writes, one would “climb the birch and swing across to the cracked marble floor. Up there, a white Venus stands in front of the burned out windows of the gallery. There is nothing better for a child than to grow up at the ends of the earth.”

Beyond sketches like this, very little about this book resembles a traditional memoir. We walk briefly among shadows and memories of her childhood in East Berlin, but there is nothing in the way of immersive personal detail save her granular memories of losing her mother and managing the inventory of her belongings and apartment after her death.

The book, composed of essays and speeches, is confined to “Life,” “Literature and Music,” and “Society.” Artistic craft and influence occupy the bulk of the text. It’s through that conversation that Erpenbeck notes that, “Literature tells us that what we know is never the whole truth, but literature also tells us that the whole truth is waiting for us, if only we could read. And with that, it begins to teach us to read, even if that lesson requires more time to learn than we have in our own lifetimes. It also teaches us—and here I include myself as a writer—that the truth never ends where we want it to end.” She goes on to write that “We have to learn to live with the fact that certain questions are met with silence. And that is sometimes truly difficult.”

A deeply deliberate writer in possession of a keen sense of tempo, it’s telling that she trained and worked as an opera director for years before concentrating on fiction, a detail that reveals itself in relation to her development as a writer. As much as writers such as Ovid, the Brothers Grimm, Thomas Mann and Thomas Bernhard surface throughout her speeches and essays on artistic effort, Erpenbeck is as much influenced by circumstance, the engagement of her training in theater, and external motivation.

Charmingly, she recounts, “I still remember very clearly how after I finished my degree, I suddenly had nothing to do but work half days at the bakery and spend the rest of my time actually writing this book, the task I’d set out for myself. The GDR hadn’t taught me how to be unemployed.” Underemployment creates considerable time for reflection. Erpenbeck tackles enormous, complex topics in the memoir—freedom, citizenship, humanity, refugees, asylum, identity. But she’s in no way didactic. Rather, she takes these subjects presumably because she finds herself at an impasse.

Reflecting upon her motivation to write, Erpenbeck explains, “If the language that you can speak isn’t enough, that’s a very good reason to start writing. As paradoxical as it may be: The impossibility of expressing what happens to us in words is what pushes us toward writing. Whenever I have not been able to understand something, have not been able to capture it in words, that’s when I’ve started writing. And that’s how it was with my first book [The Old Child & Other Stories], too.”

What Erpenbeck repeatedly confronts are things unsaid, the use of silence, the varied meanings of the word “freedom,” and writing as an act of translation. She is deeply conscious of recovering lost histories and forgotten ideas. Through writing, Erpenbeck is able to capture various perspectives and lives not taken. Her Stassi file reveals the identity of a childhood secret admirer. She talks about the writer Hans Fallada who amassed an archive of primary sources and histories of World War II survivors, which he used as the basis of his work.

A child of the Cold War as well as a survivor of the ruins of the Third Reich, Erpenbeck considers our contemporary moment with an especially sharp lens. Concentrating intently on our immediate refugee crisis, Erpenbeck dismisses distinctions between her own experience as an East German subsumed by a new country and that of contemporary refugees seeking asylum from the Middle East and African countries. Questions about the treatment and language surrounding immigration and refugees prompted Erpenbeck to undertake research that brought her in close relationship with those fleeing economic and political crises. This awareness allows her to strip away at distinctions between economic and political crises, drawing a direct line between economic situations that are the direct result of the political actions of colonialism and imperialism.

In so far as this is a memoir, it’s one that perhaps argues that all personal histories are significant when you consider lives through unifying perspectives. Concluding with a sharp focus on society, her memoir closes with a haunting look at individuals who are stateless, giving ample space to an obituary for Bashir Zakaryau. Dead in his early forties, Zakaryau fled turmoil in Nigeria then Libya before seeking asylum in Europe. During his voyage from Libya, his boat capsized. While he survived, his two children (ages 3 and 5) did not. Erpenbeck first encountered him in 2012 speaking out in Berlin against the inhumanity of Europe’s asylum policies. She remarks that, “In the end, survival was more than Bashir Zakaryau could survive.”

For too many asylum seekers, escape is sadly only the first chapter of an endless pursuit of freedom. Chronicling the lives of refugees, Erpenbeck adds that “in the modern world of passports, quotas, emergency shelters, and exploitative black-market labor, survival is an ongoing, drawn-out process so painful that many people cannot endure it.” After recounting more refugee stories, during a speech given at the University of Oklahoma in 2018, Erpenbeck notes, “We hear stories like these, from this parallel world, from these blind spots in the happier world we seem to see around us—if only we are willing to look and listen. But are we willing?”

Expanding upon the art of listening, Erpenbeck’s analysis of blind spots urges readers to listen to what isn’t said, asking, “How far do you have to step back in order to see an entire historical tapestry extending far beyond your own lifetime? How much do you have to know in order to understand what it really is that’s flourishing in your own blind spot?” Willful or innocent, our inability to recognize ourselves in others is the problem of our contemporary moment. Wielding literary analysis and history, Erpenbeck reconsiders the true subject of memoir while also claiming her reason for writing. Focusing entirely on ourselves reveals very little when we don’t pay attention to others and unexplained questions. Erpenbeck is a virtuoso whose eye for detail depends entirely on a refusal to write what’s easy or straightforward. It’s a perspective conditioned by losing one identity and watching an entire country disappear in the name of freedom. 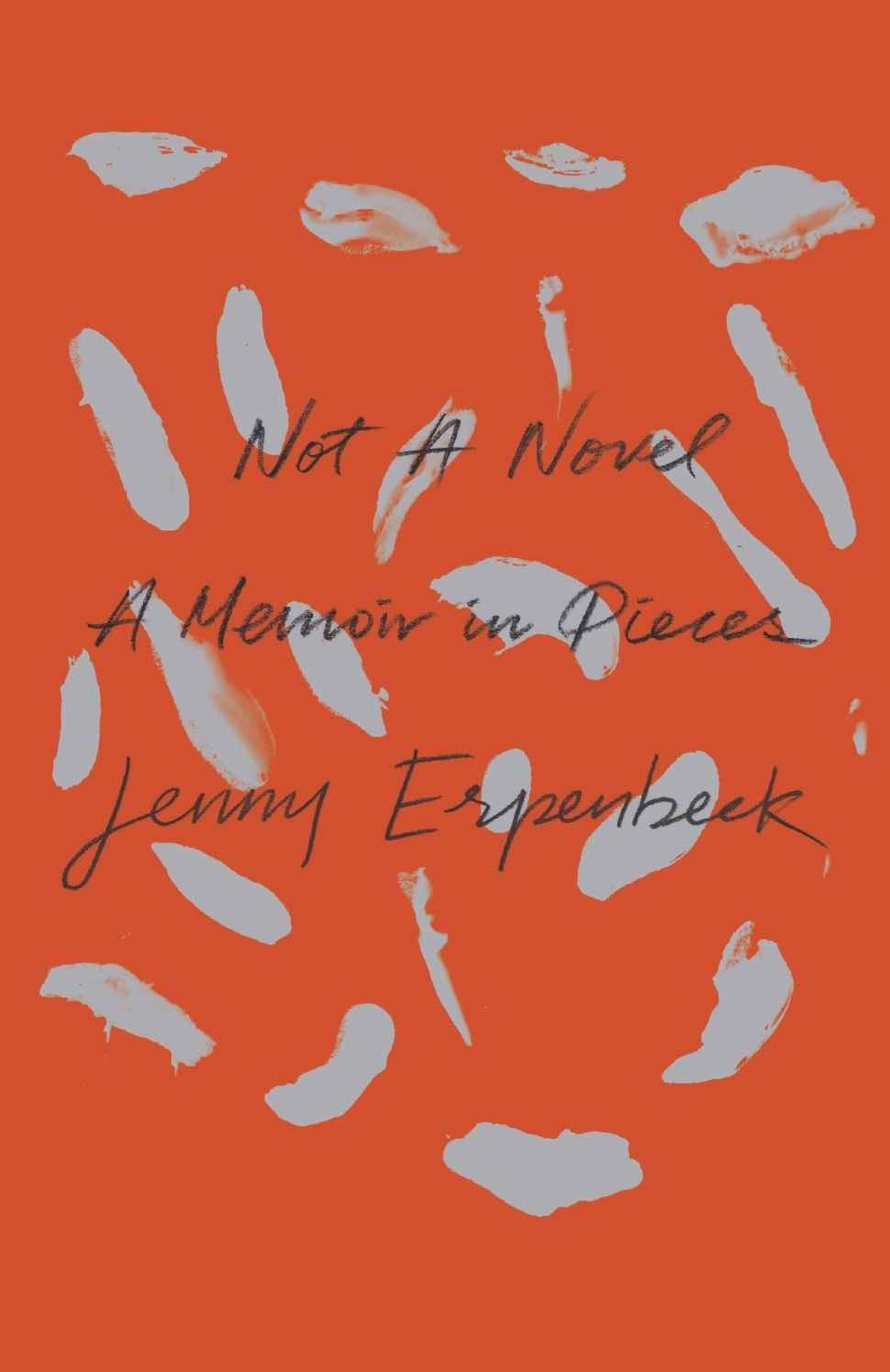