Two different configurations of clocks line the walls of Sean Kelly Gallery, each with quotations from eminent thinkers, each telling a different time as the hands of the clocks move at varying speeds in both directions.

Think timeless quotations and time out of control.

Here is a sample from the German philosopher and critic Walter Benjamin: “The gray film of dust covering things has become their best part.”

On Skype from Rome, Joseph Kosuth, amiable and contentious at 75, discussed the title of his show, “Existential Time,” which runs at Sean Kelly through October 24. “People who’ve seen it will say it’s quite prescient,” he said, since the show was due to open just as New York City imposed pandemic restrictions, “but I have to give credit for that to Mr. Beckett,” Kosuth said.

Samuel Beckett, that is, the absurdist Irish writer (1906-89) whose play “Waiting for Godot” put two homeless men on an empty stage, anticipating something or someone that is never identified and never arrives.

“I felt particularly close to him and his thinking. My work since my youth has been a project on meaning, how we make meaning. Beckett was confronting the question of the lack of meaning,” Kosuth said.

“Existential Time,” he noted, is a reflection on “how we make meaning with the experience of our lives.”

The show was scheduled to open at Sean Kelly on March 26. When restrictions made that impossible, Kosuth, who lives mostly in London, left his New York studio for a house in the woods owned by his nephew in western North Carolina—“beautiful, bears on the front lawn.”

This summer he’s been living in an Airbnb in Rome, in anticipation of looking for a place to live in Venice.

Kosuth has been a figure in conceptual art since he was twenty, when the Museum of Modern Art acquired One and Three Chairs, 1965, a work that consisted of a chair, a full-scale photograph of a chair, and a posted dictionary definition of a chair. In 1969, he published Art After Philosophy, an attack on classical notions of aesthetics.

“Decorating the walls of rich people is not where ideas live and die. Duchamp once said ‘stupid like a painter.’ I never wanted to be stupid,” he said.

Comments like that aren’t the best way to make friends, at least not among painters. That hasn’t kept his work from entering private collections and museums around the world.

“My work now is true to the same tenets as when I started it with One and Three Chairs. We were looking at art, and we were looking at culture, as passive consumers. I wanted an art that would make people think, that the work in some ways would actually be put together and finalized in the mind of the viewer,” he explained. “My shows always did that, which is why they weren’t a success with the interior decorator class.”

Kosuth has also stayed with neon as an element of his work, even as plenty of new ways of illuminating an object became available. “Bruce Nauman very kindly, in a catalogue of his work, said I had done it three or four years before him,” he said, “It’s not often that artists are honest like that.”

And, Kosuth notes, his work became “dissertation fodder” for academics.

“Fine,” he said, returning to the subject of the art market, “the demand for art is like having an old patriarch wanting a woman to be beautiful and pregnant and barefoot, and not having anything to say. Something pretty to hang over your couch.”

“I’ve always been opposed to that,” he added emphatically, “when art is being reduced to being a necktie for over the couch, that’s the end of it. It begins to atrophy and it becomes subject to the taste dynamic of fashion.”

“That didn’t make me too many friends, particularly among the artists,” he noted.

But was Kosuth contradicting himself? Here was the man who enshrined in neon Walter Benjamin’s observation that “the gray film of dust covering things has become their best part,” and then decried atrophy in other objects. Wasn’t one person’s “grey film of dust” another person’s atrophy?

The quotes on the walls at Sean Kelly are not his work, Kosuth says, nor are the clocks and the few images on the walls. His work, he says, is in the space between them: “I’m not in the donut business, I’m in the donut hole business,” he says, repeating an observation that he has made for years. 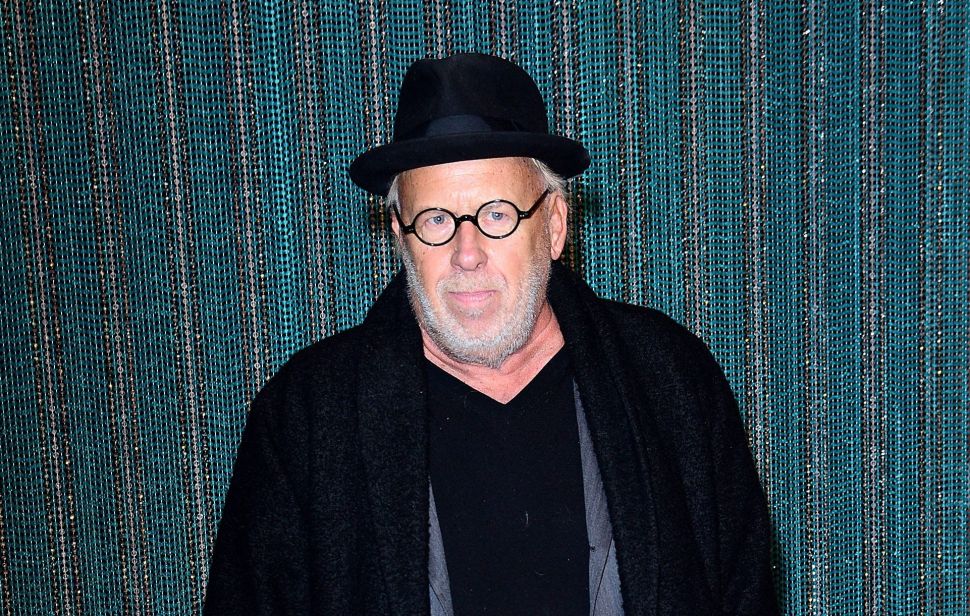