September 16 marks 43 years since the premature and quiet expiration of Maria Callas, the 20th century’s prototypical diva and a figure whose voracious artistry and jet-setting glamour have lodged her firmly and indelibly in the cultural conscience. In what is by modern standards a brief international operatic career, from roughly 1947 (her Italian debut) to 1965 (her final staged performance, Tosca in London), Callas cultivated a reputation as a consummate artist, champion of the most challenging bel canto roles, and a public figure whose clashes with impresarios and strategic romances (including an affair with Aristotle Onassis) made opera a front-page news story and generated a mob of devotees so fervent it has proved cross-generational.

It’s unsurprising, then, that amidst all the hype and hubbub of the past four decades, what endures most compellingly of the Callas Cultural Monument is maybe not her rich and oft recirculated discography, her clothes and costumes, nor her letters and personal effects. “La Divina,” as she was christened during her lifetime, is most exultingly and perversely perpetuated through a ceaseless and hubristic pop-cultural spelunking, a sub-genre that includes a movie by Franco Zeffirelli, plays by Terrence McNally, a traveling hologram, and numerous documentaries, all of which endeavor to weave together strands of Callas as Woman, Callas as Artist, and Callas as Exploited Cultural Commodity, yet mostly serve as testaments to their own futility.

It’s this hagiography that most distances us from a flawed artist of prodigious talent whose early and somewhat anonymous demise alone in her Paris apartment was unfortunately dissonant with her compressed career and the notoriety generated by her very public triumphs and scandals. 7 Deaths of Maria Callas, which premiered at the Bavarian State Opera in Munich over the weekend by and starring famed performance artist Marina Abramović, is the latest work of such masturbatory necrophilia to join that inauspicious catalog. (It is streaming on the Baayerische Staatsoper’s website through October 7.)

An artist fascinated by perception, Abramović might actually seem more intuitive than most at unpacking the elusive diva factor that makes the Callas mythos so enduring. But instead, she casts herself as a sort of furtive surrogate for Callas and, with the help of Willem Dafoe and a septet of young singers, spends an hour and a half trafficking in cryptic and foreboding platitudes and hit parade arias that meaninglessly romance the festering Callas corpse and come across more as self-aggrandizement.

The 7 Deaths in question reference the doomed heroines in different operas whose arias became Callas calling cards. With a procession of sopranos and mezzos performing as accompaniment to a rangy collection of arthouse videos starring Abramović (who, meanwhile, “sleeps” nearby onstage), most of the performance had a predictable vocal-competition feel. Surely this isn’t the fault of the ensemble of singers, all of whom were at the very least quite polished. Hera Hyesang Park excelled in a quavering and plaintive “Addio del passato” from La traviata, emphasizing Callas’s short-lived fragility, while Nadezhda Karyazina’s slinky Habanera from Carmen, performed to footage of Abramović dressed as a toreador being hogtied and stabbed by Dafoe, capitalized on Callas’s sensuality. The vignettes are broken up by narration and atmospheric orchestral scoring by Marko Nikodijević that includes some gripping interludes reminiscent of Thomas Adès, when it doesn’t sound like Bernard Hermann’s Psycho score.

The final third of the 90-minute performance saw Abramović navigating a reconstruction of Callas’s Paris apartment while a lengthy voiceover narrates (or commands?) her actions. Attended to by the singers, dressed as maids, Abramović emerges in a gold lame dress and climactically gestures along to a few lines of Callas’s recording of “Casta diva” from Vincenzo Bellini’s Norma, in which a Druid priestess invokes a sovereign and serene moon goddess.

However, the effect is more dialogic than mimetic; Abramović “talks” to Callas and Callas responds through the aria, Abramovič becoming its subject. Abramović now assumedly elevated to a celestial pedestal, with the blessing of Maria Callas, the performance finally, frustratingly ends.

If this piece of performance art, paradoxically housed in a highly traditional performance venue, expounds accurately on anything, it’s about the collision of cultural memory, expectation, and myth in the same way, say, the recent Judy Garland biopic did. Notwithstanding its own effectiveness, it keeps the diva in the zeitgeist, but in doing so, pushes her farther and farther away. And as Callas’ original audiences die off, her actual legacy grows cloudier, her reality evermore untenable, and her shadow over pop culture more heavily ghostly. Yet grasping at the distortion of Maria Callas that Abramović evokes here is about as gratifying as, well, grasping at her hologram. 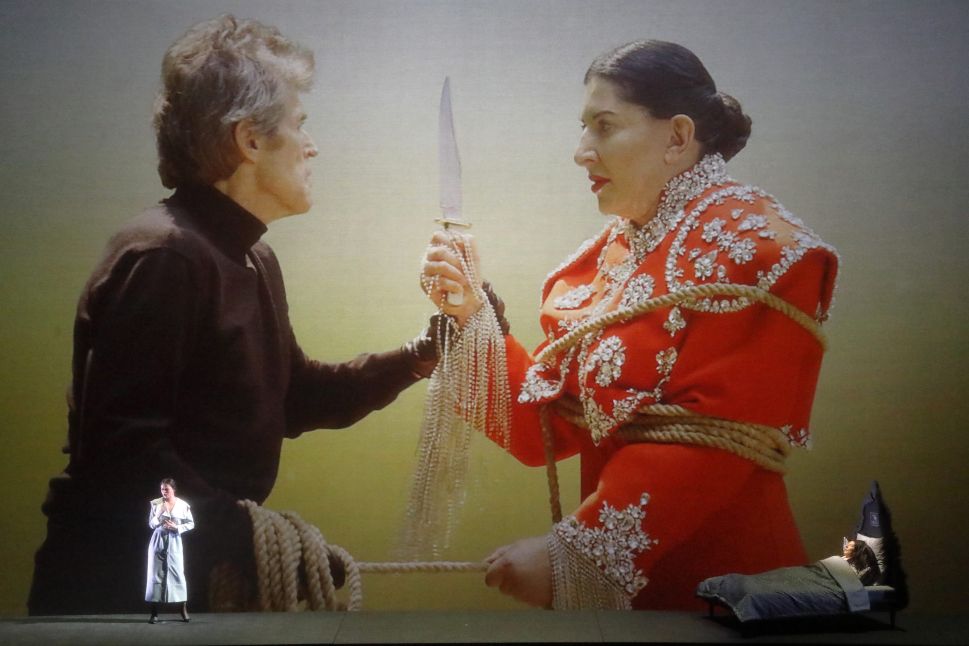