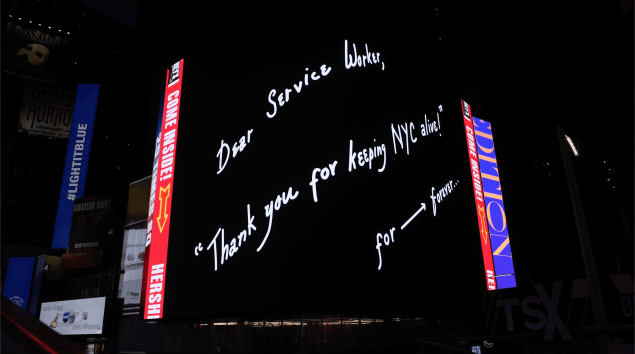 41 years ago, the artist Mierle Laderman Ukeles launched the radical art undertaking that would become her best-known project: for 11 months, Ukeles traveled throughout every borough in New York City in order to accomplish her goal of shaking hands with every single sanitation worker in the huge metropolis. For Touch Sanitation Performance (1979–80), in addition to shaking hands, Ukeles also thanked every worker she interacted with for “keeping the city alive.” Decades later, New Yorkers are in an entirely different spot, but sanitation workers are more essential than ever. For that reason, Ukeles has joined a new collaboration between MTA Arts & Design, Times Square Arts, and the Queens Museum in order to broadcast her vision to the city once again.

Beginning on September 8, a huge billboard in Times Square, the facade of the Queens Museum facing the Grand Central Parkway and digital displays throughout the MTA subway system will bear the artist’s message: “Dear Service Worker, ‘Thank you for keeping NYC alive!’ For ——> forever…” Ukeles, who’s been the the artist-in-residence at the New York City Department of Sanitation for decades, now lives in Israel. Therefore, she was unable to deliver this message in person as she did decades ago, both because of the distance and because of the coronavirus. As a result, her virtual statement will have to serve as an impactful replacement for person-to-person contact and gratitude.

SEE ALSO: Trash Talk: The Department of Sanitation’s Artist in Residence Is a Real Survivor

“Before we were using the term ‘socially engaged art’ or artist, [Ukeles] was really pioneering that field,” Jean Cooney, the Director of Times Square Arts, told Observer on Thursday. When the pandemic first kicked into high gear, Cooney explained, she paid close attention to the conversations about essential workers, who had always been considered essential to the city but whose lives had just become a lot more precarious. “I just thought, if there was any artist that would be so lovely to hear from in terms of expressions of gratitude and acknowledgement of that specific work force and the individuals in those roles, I thought Mierle would be incredible.”

Keeping the artist’s mission firmly in mind, the screens displaying her message will be displayed throughout a network of public transportation locations explicitly designed to reach New York City’s service workers. Because at the end of the day, no matter how many promises the mayor and governor may make, they’re certainly not the people collecting your building’s trash every week. 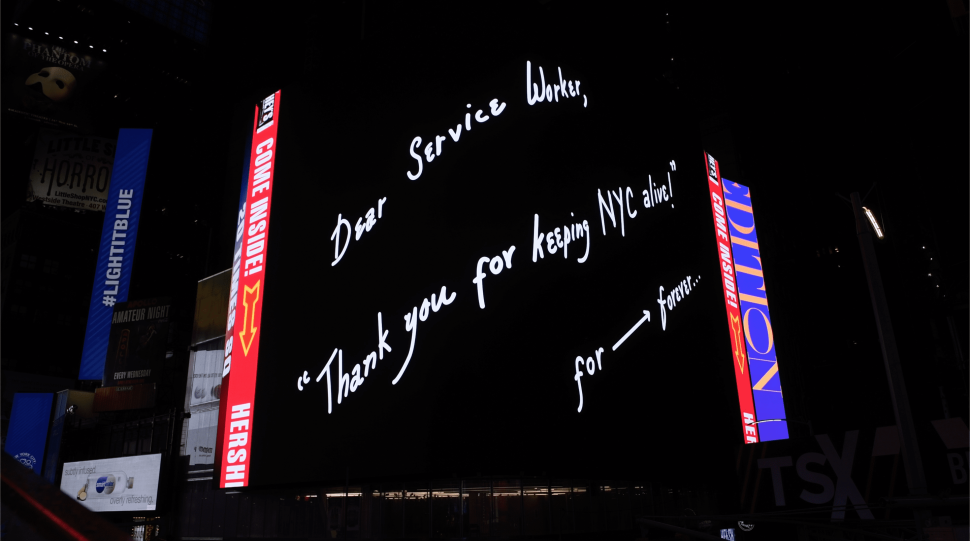