With the release of Disney’s live-action Mulan this past weekend in select theaters around the world and via Disney+ Premier Access in a handful of territories, protests and calls for boycotts have resurfaced yet again. Initially, the #BoycottMulan campaign started in summer 2019 when star Li Yifei made social media comments in support of police forces during the Hong Kong protests.

At the time, Liu shared a message on popular Chinese social media platform Weibo that read “I support Hong Kong’s police, you can beat me up now,” according to The Hollywood Reporter. Liu then added on Weibo in English, “What a shame for Hong Kong.” The remarks came at a time in which new policies allowing citizens to be extradited to mainland China were being protested by the public. Earlier this year, Liu said simply “I just really hope this gets resolved soon … I think it’s just a very sensitive situation” when asked by The Hollywood Reporter to further explain her previous comments. Now, additional protests are popping up as it has been reported by the New York Times that Mulan was partly filmed in Xinjiang, a Chinese region where Uighur Muslims have been detained in mass internment camps.

Despite the compounding controversies, the film appears to be performing well for Disney. Sensor Tower, an app download research firm, tells Yahoo Finance that downloads of Disney+ spiked 68% from Friday, Sept. 4 through Sunday, Sept. 6, compared to one weekend prior. Consumer spending in the app also rose by 193%, which is directly connected to the $30 purchase fee required to access Mulan via Disney+ Premier Access. That compares favorably with the massive success of Hamilton, which reportedly drove new app downloads by more than 72% of its weekend of release, via analytics firm Apptopia.

Adding more third-party fuel to the fire is Reelgood, which tracks every film and TV show available online among its 2 million U.S. users. According to their data, Mulan was the single most-watched film in the United States this past weekend across digital platforms. It claimed nearly 15% of all available digital film streams from September 4 to September 6, edging out Charlie Kaufman’s new Netflix feature I’m Thinking of Ending Things. 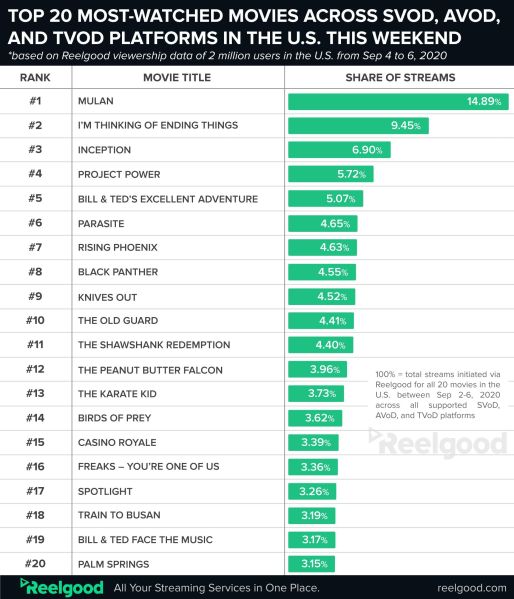 According to Disney, this weekend saw a strong opening for Mulan in just a handful of smaller international markets, representing only around 6% of normal international footprint, per Comscore.  It grossed an estimated $5.9M, placing #1 in UAE, Malaysia, Singapore and Thailand while posting the highest grossing opening weekend to date in 2020 in both Singapore and Thailand. Next weekend sees Mulan open in China and Russia.

However, unless Disney suddenly becomes far more transparent than their recent history would suggest, we won’t know any concrete purchase figures or subscription growth data in relation to Disney+. The metrics for success have changed in the era of the coronavirus pandemic and there no longer is one uniform statistic to measure performance. The benefit for Disney when releasing Mulan via PVOD on Disney+ as opposed to Google or iTunes is they retain 100% of the revenue generated as well as all of the viewership data to better guide their future release strategies.

Mulan, which carries a reported $200 million production budget, received an international theatrical release in regions in which it was safe to reopen theaters. In the 20-plus countries and territories that Disney+ is currently operating, users can purchase the film via Disney+ Premier Access for $30 or wait until the film is added to Disney+ proper in December at no additional charge.