Art comes in many forms; it doesn’t just exist within canvases or onscreen. In celebration of this truth, Phillips auction house recently announced that on September 11, it will launch its first online auction dedicated to highly sought-after Scandinavian-designed furniture. The auction, entitled “Nordic Design,” will feature items made by designers such as Hans J. Wegner, Paavo Tynell, Finn Juhl and Axel Salto, and include a plethora of artfully designed home objects that evoke savvy tranquility. The items predicted to sell for the highest price are a pair of spectacular white armchairs made by Juhl; they’re estimated to go for between £15,000 and £20,000 ($20,000 to $26,000).

“Phillips’ online-only Nordic Design auction offers a broad spectrum of works and a range of price points accessible to both established and emerging collectors,” Kirsten MacDonald, the Regional Director of Phillips in Scandinavia, said in a statement. “This selection celebrates the maker as much as the designer and showcases the remarkable knowledge of materials and history of craftsmanship in Scandinavia. We are excited to present collectors around the world with our first online-only Nordic Design auction and the chance to view and interact with this extraordinary group of works.”

During a time in which minimalism and a collective desire to reduce the amount of stuff in one’s household are ideas that have caught on all over the world, it makes sense that collectors’ tastes are being drawn towards Nordic design, which is defined by its clean lines and simple sophistication. The white fabric of Juhl’s chairs are contrasted elegantly by their slicing wood arms and legs, which give the furniture a welcome bit of dimension. Similarly, items like the elegant ceramic bowl by Alex Salto that’s being offered can’t help but be visually appealing. In fact, Nordic design is so relaxing to behold, it might actually be considered therapeutic. 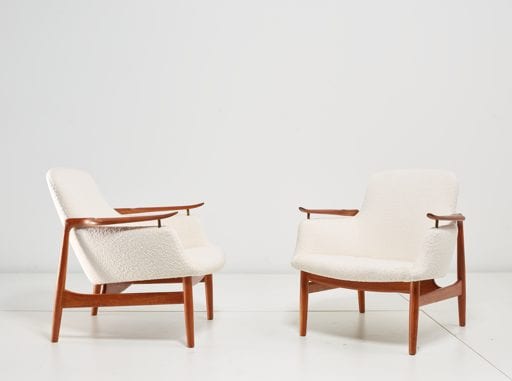