Around the middle of late March, photographer Sean Jackson was taking the downtown 2 train during one of the most dire spring seasons New York had ever seen. COVID-19 was wreaking havoc across the city, emptying out streets save for the unhoused who had nowhere else to go. Across the subway seat, words from Alberto Ríos as part of the city’s Poetry in Motion initiative stood out to him. Jackson had been documenting the brave new world of ours, taking photos of deserted intersections and frontline workers in beanies and jackets on their commutes, heading to work in the heart of the mess. The words across the distance told a story about man dying and nature coming back to life, eerily accompanying a narrative that had been looming over the heads of New Yorkers.

“Sitting in the peril it was just me and Alberto’s words. I would be in Manhattan shooting around, hearing nothing but birds chirp with magnolias blooming around me, but everyone was missing it because they were inside,” Jackson tells Observer. Between March and May, the photographer would finish Faithful Forest (a title inspired by Alberto’s poem), a series of images exploring the relationship between the living ecosystems of humans and nature in the city amidst the pandemic.

Coming from a family who works in breaking news, Jackson was a student of journalism prior to moving to New York, eventually learning photography and deciding to use the camera for his investigative interests. While his first choice in subjects are people, photographing the streets during the pandemic gave him a chance to shoot other focuses outside traditional street photography: landscape, architecture and botany. “The highlights of the moments were still people, though,” Jackson adds, hoping this series resonates with audiences and what they themselves were doing at that time. “I enjoyed being out there alone and in fact, it was easier to connect with people because there were less than a handful out in public… essential workers, hula hoopers in the park, the nun praying in the Central Park garden. It was my therapy to be out there in the streets.”

Distilled in Faithful Forest is the evolution of the city’s momentous shifts, like that of a dormant flower slowly opening itself up. With New York City now feeling like it’s somewhat revived—friends gathering in parks, restaurants bustling with curbside dining—Jackson’s images like the empty Oculus and the presence of military hospital workers working out of the Javits center are starting to feel like a distant memory. In one of the images, two enlisted medical officers are seen heading to the Empire State Building after a long day battling the virus. Jackson, who grew up near a navy base in North Carolina as well as the Pentagon, had never seen enlisted soldiers on the ground in New York. It was a stark and unique moment reflecting the gravity of the situation we were in, one he couldn’t pass up with his camera.

“Maybe this body of work represents a shift in our value system,” Jackson says. While the work now lives online, he’s hoping to show it to in-person audiences once live art viewing is the norm again. “One thing I did was take audio samples, and there were no cars or verbal arguments recorded, just birds chirping, hands clapping at 7 p.m., Alicia Keys playing from the window… what I want to do is take these images with these sounds and bring this momentous year back to life so we feel like we’re there all over again and unlock the feelings of those times.” 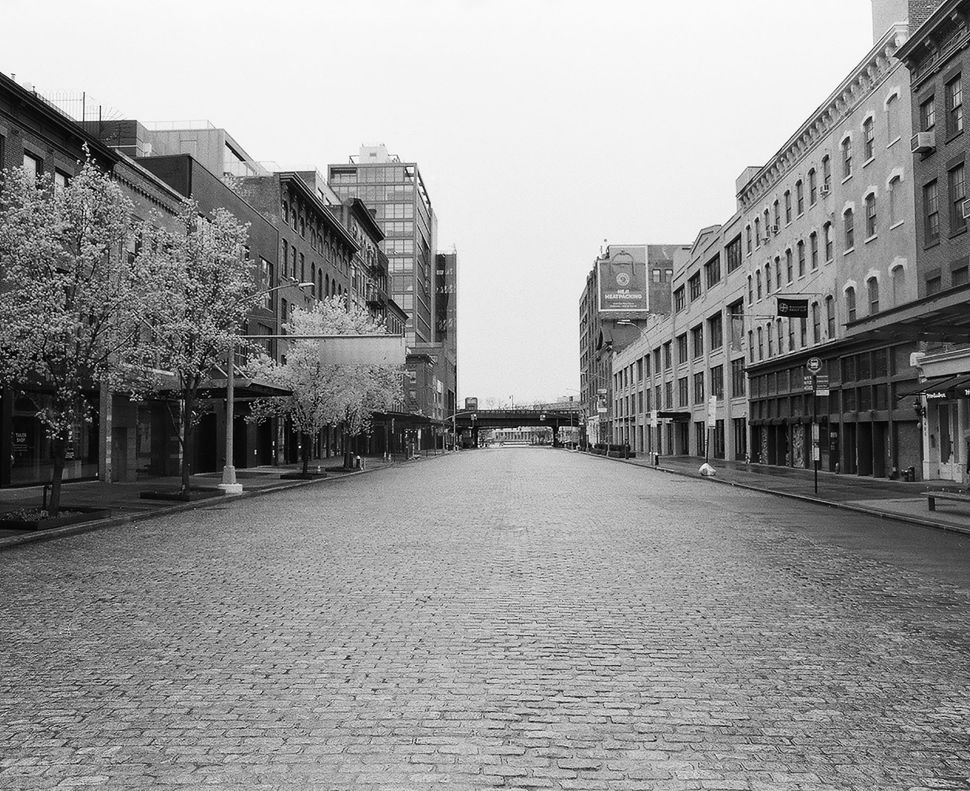