As pharmaceutical giants race to finish COVID-19 vaccination trials and the United States barrels toward Election Day, Americans are growing increasingly skeptical and cynical about the collisions between science and politics.

While President Donald Trump has made optimistic statements about a vaccine being approved before November 3rd, respondents to a new tracking poll from the Kaiser Family Foundation finds less enthusiasm about that very expedited timeline. The new poll, the results of which were released on Thursday morning, finds that 81 percent of respondents do not think that a vaccine will be widely available before the election. More significantly, only 42 percent of people say that they would be willing to take any vaccine approved by the FDA before November.

What’s behind the skepticism? Timing, of course — the election is in less than 60 days — as well as the politicization of the virus and the race for a vaccine. According to KFF, 62 percent of respondents expressed concern that political pressure, particularly from the Trump administration, “will lead the FDA to rush to approve a coronavirus vaccine without making sure that it is safe and effective.”

A vaguer version of a similar inquiry led to somewhat different results, as about 40 percent of respondents said that they thought that government scientific agencies were paying “too much attention” to politics. They were slightly more concerned about the CDC, as 42 percent suggesting that the agency was too attuned to the politics of the moment, compared to 39 percent of respondents who said the same thing about the FDA.

While general anti-vaccine skepticism has continued to plague the country, this specific situation is less a partisan situation—both Democrats and Republicans express healthy distrust. 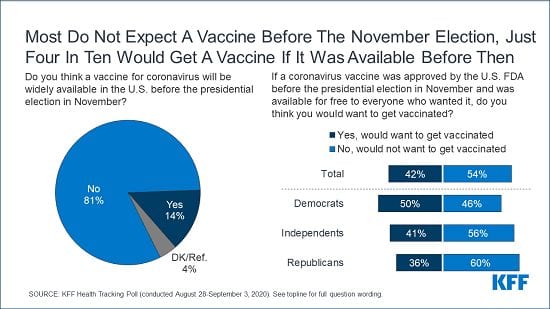 A new poll of Americans on impending COVID-19 vaccinations

Skepticism may actually be more pronounced than what’s reflected in the poll’s results. The poll was in the field between August 28th and September 3rd, while on the evening of September 8th, AstraZeneca and Oxford University announced that they were pausing trials on their vaccine candidate after a participant suffered adverse effects. The vaccine was considered the leading candidate to be finished by later this fall, a setback to any hope of an impending vaccine approval.

Public health officials have also since tried to downplay the slim chances of any vaccine’s upcoming approval. In an interview with NPR last week, Moncef Slaoui, the chief scientific advisor of the Trump administration’s Operation Warp Speed, said that he thought there was a “very, very low chance” that any of the vaccine candidates will deliver reliable results by the end of October, adding that large-scale vaccine distribution by then is possible “but very unlikely.”

The race for a vaccine has become a political issue, as well, with Trump touting the progress and Democrats expressing skepticism. Last week, California Senator and Democratic Vice Presidential nominee Kamala Harris said that she wouldn’t trust Trump’s promises on the safety or efficacy of any vaccine before election day.

Sensing the anxiety, pharmaceutical companies participating in the administration’s Operation Warp Speed yesterday pledged to let science dictate their decisions on vaccine readiness. A story in Thursday’s Wall Street Journal outlined that it several vaccines may ultimately get approved—Moderna and Pfizer also have candidates in late trials—could have results available this fall and be approved for distribution soon after that.

“I think the general public maybe has the wrong impression that there will be a winner and only one winner and everybody else will be a loser,” Dr. Anthony Fauci, director of the National Institute of Allergy and Infectious Diseases, told the newspaper. “That’s not the case at all. I think it’s quite conceivable, if not likely, that you’re going to have multiple candidates that’ll get over the finish line that will actually be good enough to be approved for production and use.”

The CDC has asked states to be ready to distribute a vaccine to vulnerable members of the population by late October. Whether anyone will trust those vaccines remains to be seen. 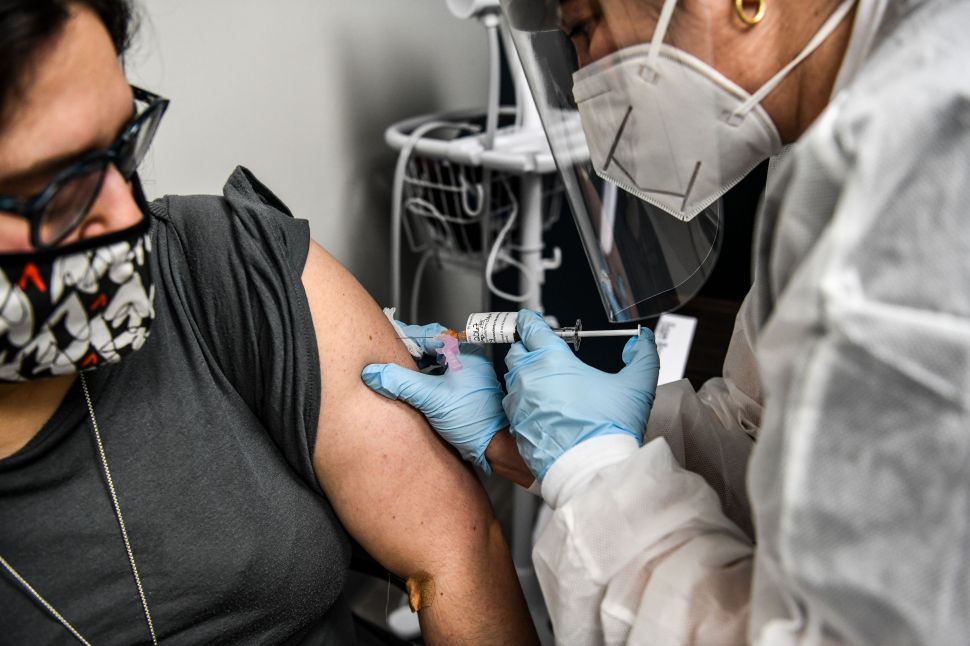