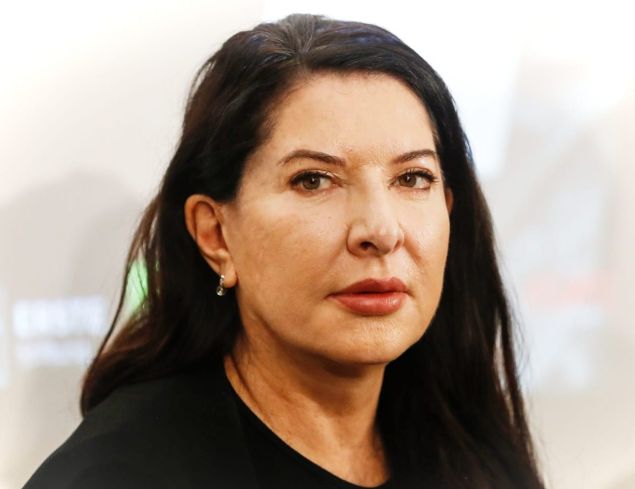 From Marina Abramović’s famed MoMA exhibit, The Artist Is Present, to her 1,000 mile walk along the Great Wall of China, her namesake performance art institute, and collaborations with the likes of  of Jay-Z and Lady Gaga, it can be tempting think the multi-hyphenate performance artist has done it all.. But while she constantly surprises with new projects, the New York-based Serbian artist has also taken a rare moment to look backwards, returning to her roots in Belgrade for a new documentary about her life, Homecoming: Marina Abramovic and Her Children.

The film follows the artist in the lead-up to her Belgrade retrospective, The Cleaner, at the Museum of Contemporary Art in 2019, after touring through six other European cities. It’s a nostalgic (but not sappy) trip as she revisits her old haunts, from her childhood home to her old neighborhoods. The exhibition is a “coming home” to Abramović, who wanted to show the people of Belgrade the kind of art she’s been doing over the past 50 years, which has largely been inspired by her country and her background. It also shows what it feels like for an artist who ran away from home to return after success abroad.

The documentary, directed by Boris Miljkovic, recently made its premiere at the Sarajevo Film Festival and screens next at the Mostra de Valencia film festival in Spain on October 22.

Just last week, Abramović performed her opera 7 Deaths of Maria Callas with the Bavarian State Opera in Munich, which is based on the famed 20th century opera singer and her personal love affair with Aristotle Onassis (who was then married to Jackie Kennedy). In the opera, Abramović pieces together the endings of seven operas Callas became known for, which basically amounts to seven tragic deaths; from jumping to drowning and strangulation. As for the opera diva’s real demise, alone in her Paris apartment, Abramović puts it down to a broken heart.

Abramović should have been preparing to open her massive Royal Academy of Arts retrospective in London this fall—the first time a woman has been granted a retrospective at the historic arts venue in its 250 year history (it’s been postponed to 2021)—but Abramovic has shown her adaptable spirit in rolling with the punches of 2020. She spoke to Observer about how work has kept her going through her own heartbreaks, and the memories making this documentary brought back.

Observer: How did the opera go in Munich on September 5?
Marina Abramović: It’s a push of 30 years to realize it. It went through different phases—I wanted to make it a film. But it was unrealistic because I wanted different directors to direct different scenes, Polanski, Lars Von Trier, Iñárritu. I had an ambitious list. It went to nothing. I got an invite from the Bayerischer Opera if I wanted to do a different approach to opera. They said: “Ok, let’s do this project.” The journey started two years ago with a script, then added costumes, conductor, lighting. I took all my friends, the best of the best, to work together on this project. We rehearsed in March and were sold out in April, all 2,300 seats. Five days later came the lockdown.

How did you proceed with social distancing measures in place?
We were devastated but continued to work with social distancing. I’ve been tested for COVID-19 nine times now. I’m testing every week. We worked with a piano and kept it simple with seven singers. We don’t have choruses, just one singer at a time onstage. We were the only opera working during the lockdown. We created the premiere for September but were told only 200 people could attend, but a few days before the premiere, they expanded it to 500 people. We were over the moon. I feel happy, exhausted and hope we can tour it in the future. 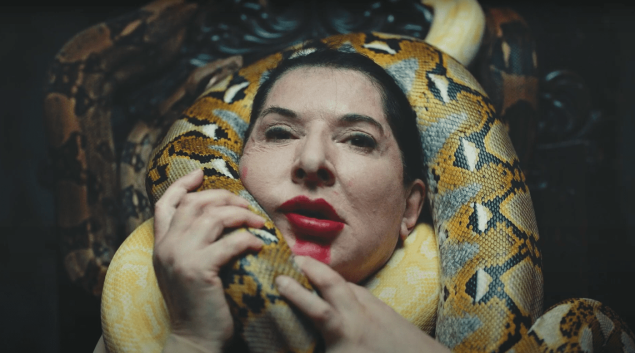 A scene from Marina Abramović’s The Seven Deaths of Maria Callas. Bayerische Staatsoper/Youtube

How is it a conceptual opera?
There’s a film, performance, music, lots of elements put together. It gives some fresh air to opera, which is such an old art form that is difficult to change. Every time you try to change something in opera, you’re just waiting for rotten tomatoes to be thrown at you.

This is an opera about heartbreak. Is it true when your husband [the artist Paolo Canevari] left you that work saved you?
Work really saved me. All that Callas wanted was to have a child and be married. This was shocking to me. When you have a gift like Callas had, you have a right to give it away. You have to share it with everyone, it’s so rare. People ask me: “If you met Maria Callas today, what would you say to her?” I would tell her: “You have a right to give your gift away.” That if she had a war to go through, it would save her.

How have you been keeping busy in quarantine?
I’ve been busy but it has been a blessing for me. I know people are suffering. But it brought me back to my own senses, I’m in the countryside gardening, watching a porcupine cross the street, deer are passing by. It’s so full of joy. If we live in the present, time doesn’t exist. We just enjoy every day as the last day of your life. A certain tranquility and humor returned to me. But there’s also a lot of difficulty for artists, who aren’t selling their work right now.

I’m sorry to hear about the passing of your former partner, Ulay, in March. Have you had a tough time grieving?
He was sick for 10 years. It was actually a miracle the last three years that he lived. He lost so much weight and had this incredible energy to go on. The day of lockdown, he died. I couldn’t go to the funeral. I’m looking forward to the retrospective of his show at the Städel Museum in Frankfurt. The title of the show is “Ulay Was Here.” I’m going for the opening and going to support whatever way I can.

What was it like shooting the documentary, Homecoming?
Oh my god, it was traumatic coming home. Love and hate, mixing feelings. I have an incredible support from the younger generation but an incredible rejection from my generation. It was a mix of all these elements together.

The most touching part is when you visited your childhood home? How different was it?
This door never opened whenever I visited, and this one time, the door opened.

You ran away to partly get away from your mother, why was she so tough on you? Was there any positive in it?
She really taught me discipline and order. I have an iron discipline and willpower. If I didn’t have that I couldn’t do 80 percent of the things I’ve done in my life. It would have been impossible. It was a communist iron fist. I made peace with it and healed myself through my work. I put my biography on stage. Somehow, it becomes less difficult. I’m not crying anymore about my past or my childhood.

Were you able to reconnect with people from your past in Belgrade when you came back?
Returning was like a sense of peace. All the memories, and people I really love didn’t want to see me. I remind them of whatever they are in their lives. I wish to have the five friends who I had at the Student Cultural Center back then, but I only had two come. I was really hurt by that, I wanted to have dinner with them and talk about times of love. It was impossible. The gap was too great, too big.

In the documentary, you say your work can only be done with the audience, “artwork created with the audience as one.” How can that be done now in the pandemic?
Performance can only be done with an interaction with the public. The performer and the public finish the work. The Black Death in the 14th century lasted for 15 years. The world survived. This pandemic we have science, it could last for another few years. Art will survive. I don’t think art should make compromises for the pandemic. We have to wait. 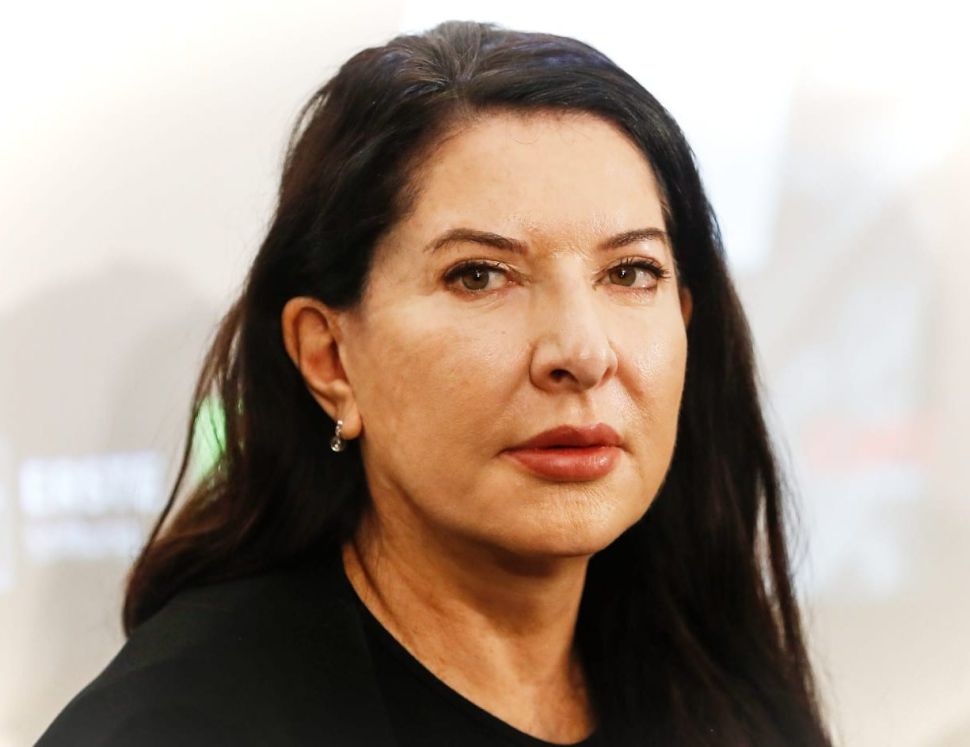