When the coronavirus pandemic hit the U.S. in mid-March, I was one of roughly 3 million young adults to move back in with a parent or grandparent. Before the pandemic I was living in my own apartment for the first time and in the middle of completing my master’s degree. After commuting from home for the entirety of my undergraduate studies, the idea of my newfound independence being stripped away and returning to my childhood home to learn and work remotely was not ideal.

I’m lucky, of course. I love and appreciate my family and we’re beyond fortunate that none of us contracted the coronavirus or lost our jobs. But working from home is tough. I have to plan around three other people’s work and school schedules, listen to family arguments and am frequently interrupted while writing. Simply put, I had spent nearly my entire lifetime at home and returning felt like a step backwards, like the next chapter of my life was being delayed.

It was perhaps by fate, then, that while browsing Netflix this summer, I stumbled onto Schitt’s Creek, the outrageously funny fish-out-of- comedy that finds the once-ultrawealthy Rose family displaced to the boonie town of Schitt’s Creek, which the father bought as a joke for his son. I was immediately hooked. The show—which set a record at the 72nd Primetime Emmys for the most wins in a single season for a comedy, sweeping up a total of nine awards—is a perfect marriage of Larry David’s crass humor in Curb Your Enthusiasm and the dry rural Canadian humor found in Letterkenny, two of my favorite shows.

But what resonates more than the show’s daffy humor is the family’s development through its six seasons. Upon arriving at Schitt’s Creek in the first episode, the Rose family is nothing short of dysfunctional. They seem helpless without their wealth and servants attending to their every need. The stereotypical social and psychological flaws of the wealthy that the Roses satirically embody—narcissism, a sense of entitlement, manipulation—are no help either.

More importantly, until this point the Roses had hardly spent any meaningful time together as a unit, despite the paterfamilias Johnny’s (show co-creator Eugene Levy) efforts. Moira (the histrionic matriarch, played by the indelible Catherine O’Hara) was too busy drunkenly acting her way through a daytime soap opera and popping pills; Alexis (Annie Murphy) jetted around the globe with her boyfriends and spent an impressive amount of time being kidnapped; and David (show co-creator Dan Levy) split time between Los Angeles and New York as a gallerist.

This makes it difficult, at first, for the Roses to envision how they’ll survive the situation. All they can think about is escaping Schitt’s Creek and returning to their formerly lavish lifestyle. To make things worse, the family swapped their grandiose mansion for two small motel rooms, leading to an abyss of ridiculous bickering and uncomfortably cramped situations.

During the first episode David and Alexis argue over who gets the bed farther away from the door to avoid being murdered first if someone breaks in. In Season Two’s “The Motel Guest,” Moira nonchalantly tells Johnny that in such a small space, “you’ve got to ignore the little irritants of the other or you go insane,” before completely dismissing her own little irritants. In Season Three’s “Opening Night,” Moira walks in on David’s hookup exiting the shower. The list goes on.

Being forced to spend time together in close quarters probably sounds familiar as we wrestle with a pandemic. In the case of the Roses, they learn the ultimate lesson from it: it isn’t money or fame that gets you through the tough times, it’s family. At its core, Schitt’s Creek is about family and during the show’s rawest moments, the Roses become compassionate people, learning to appreciate and rely on not only one another, but the “Podunk” townspeople they originally denounced. (This humanistic transformation is so convincing in no small part thanks to the chemistry of the core four actors, who from the beginning could have convinced me they were a real family. It also helps that Eugene Levy is Dan’s off-screen father, and his sister Sarah Levy also stars in the show).

In Season Three’s “The Throuple,” for example, Alexis and Moira reluctantly grab lunch together. The two are so unfamiliar with one another that Alexis desperately tries to find an excuse to bail on her mom, and Moira has to write questions on a napkin to help string the conversation along. Upon realizing this Alexis confronts her and the two have a breakthrough: they drifted apart because Alexis hated being with Moira when she was recognized in public. “I never meant for you to think that I didn’t want to spend any time with you,” Alexis candidly says. “I hope it’s not too late to make up for lost time,” Moira responds.

David also confronts Moira (who is a Schitt’s Creek town council member) later in the Season Three episode “General Store,” when she plans to approve the lease for a vacant storefront to a big box store, instead of approving it to him. Moira explains that she didn’t want David to fail and reveals that she and his father paid for all of his art, sold out all of his shows for him and paid for his patrons. Teary-eyed, David is livid to learn that his “entire professional career was a sham.” Moira realizes it was wrong of her to coddle David and by the end of the episode, in a leap of character development (and because the chain store backed out), Moira encourages David to submit his application, giving him her full support. “If there’s anyone in this town who has the eye to create something truly beautiful, it’s you David,” Moira says sincerely.

As a result of the Rose family becoming closer, they also help each other and the other characters self-actualize to not just become themselves, but better versions of themselves. Moira doesn’t just get honest with her son David, she encourages him to be creative while opening Rose Apothecary. Johnny supports Alexis’s decision to finish high school and encourages her to then attend college. After earning her degree, she becomes Moira’s publicist and helps her back into the limelight, while also proving to her mom that she has the skills to survive on her own. Johnny and Moira also take the prickly townie Stevie (Emily Hampshire) under their wings in different ways: Johnny partners with her to help turn the motel into a successful business and Moira helps her break out of her shell while starring as the lead role in the musical Cabaret.

By the end of the series the family is hesitant to leave one another and Schitt’s Creek, thus completing their transformation from a disassociated family to one that truly loves one another. Alexis struggles with the idea of separation anxiety after becoming so close to her family and Moira tells her children that she loves them and is proud of them, an unthinkable thing for Season One Moira to say. But it doesn’t matter now if they’re trapped in a motel room or separated, the Rose family learned their lesson: family is the most important thing, no matter which metropolitan city or rural town you live in.

As I binged my way through Schitt’s Creek, I couldn’t help but notice parallels between the Roses’ situation and my own. Yes, being unexpectedly relocated to my family’s home was not how I expected my 2020 to go. But it allowed for some tender moments between us. I started enjoying bike rides with my dad, whom I’d previously found difficult to talk to for very long without our political differences getting in the way—much like Alexis and Moira’s situation. My brother and I bonded over a road trip to Yellowstone National Park that wouldn’t have happened had we both not been home because of the pandemic. And my mom and I have talked at length about jobs, relationships and life experience. I’m thankful now more than ever for her wisdom and her repeated reminders that “everything happens for a reason.”

In the Season Four episode “Merry Christmas, Johnny Rose,” Johnny tells his family: “We have to make new memories, we have to start looking forward not backward.” It’s easy to think about the canceled trips and missed opportunities, all the memories that would have happened if it weren’t for the coronavirus changing the trajectory of this year. But it’s also important to recognize that for many of us who moved back in with family, these past six months have been a blessing in disguise and when this is all over, we’ll look back on this time fondly. I’ll probably miss my family a bit too.

Looking forward I plan to cherish the time I have left with them because, like the Rose family, one day soon we’ll all go our separate ways. When that day comes, we’ll wish we hadn’t taken this opportunity for granted.

Schitt’s Creek is available to stream on Netflix. 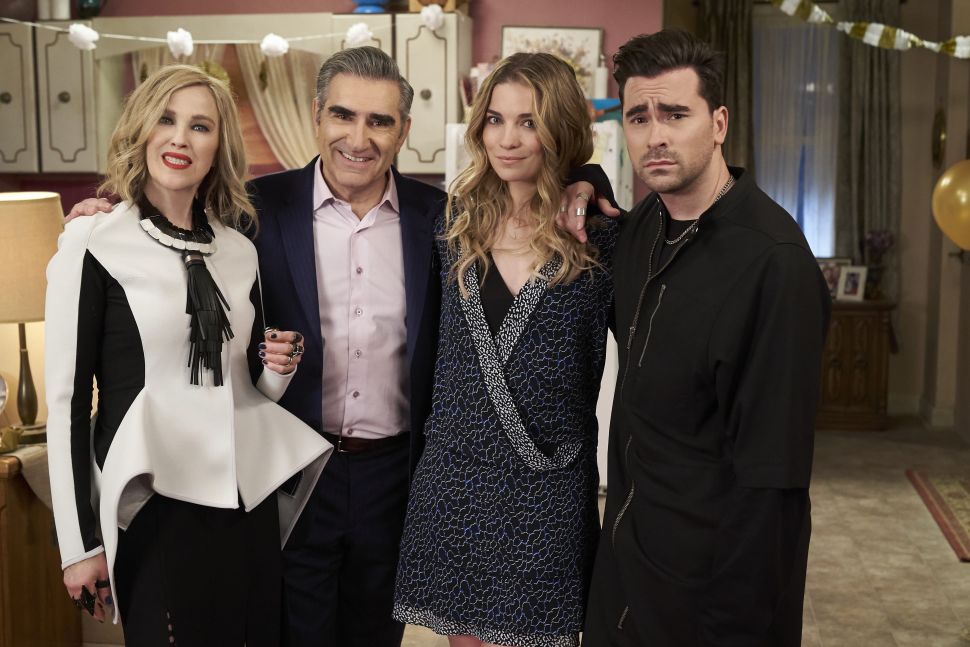