Although it has been 18 years since the most recent Austin Powers movie sauntered into theaters, a new rumor about a potential sequel seems to crop up just about every year. As recently as March, franchise director Jay Roach even admitted that “we talk about it once a month,” delighting Film Twitter fans eager for another adventure with the international man of mystery.

A fourth entry in the franchise does make a certain amount of sense in today’s Hollywood marketplace. The trilogy, conceived and starring Mike Myers, earned more than $675 million worldwide between 1997-2002. Plus, the long-awaited, years-in-the-making, legacy sequel has become something of a Hollywood special over the last decade. Studios love to recycle their own brands. But it doesn’t sound as if there’s any concrete development on an Austin Powers sequel according to co-star Seth Green.

“Oh yeah, we started shooting. It got shut down because of the pandemic,” Green joked while speaking to Observer about his Emmy-nominated Adult Swim series Robot Chicken (more on that later this month). “No, there’s no truth to it. There hasn’t been. It’s at least six or seven years ago since the last time I heard anything about [a sequel].”

Fans shouldn’t hold their breath for Austin Powers 4. But should New Line Cinema and Myers suddenly launch back into development mode, Green is ready to return in the role of Scott Evil, Dr. Evil’s rebellious and neglected son. After all, the third and final film in the franchise, Austin Powers in Goldmember, did set Scott up as the main villain moving forward.

“My position is the same: I love those movies and it’s one of the most special and awesome things I’ve ever gotten to be a part of,” Green said. “But the creation of new stuff rests solely on Mike Myers’ interest or willingness to make something and I don’t know that that’s something he wants to do. With that said, if there was an idea, I would go back for it. It was so much fun just to hang out with that gang. I think any of us would do it.” 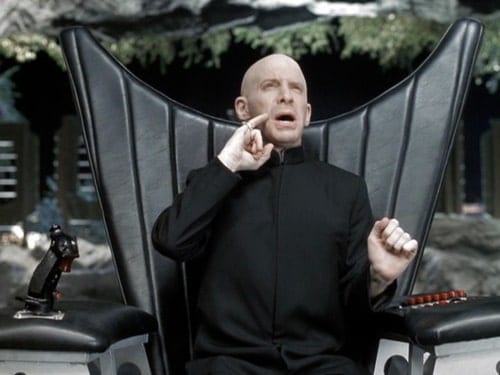