Even during a summer in which most museums were closed due to the coronavirus pandemic, the cataclysmic killing of George Floyd and the subsequent outpouring of protests against police brutality generated months of creation and destruction within many different mediums; both artistic and otherwise. Cancelled exhibitions were revived, institutional structures were interrogated, colonialist monuments were torn down and new ones were created to take their place. In order to begin to parse through all the change that’s swept across the world within the last year, Observer has compiled the five works of art that best sum up the summer of 2020.

Shortly after George Floyd was murdered and protests began to explode in response, contemporary artist Jammie Holmes commissioned five airplanes trailing banners bearing Floyd’s final, agonized words to fly over five large American cities throughout Saturday, May 30. Over Detroit: “PLEASE I CAN’T BREATHE.” Los Angeles: “MY STOMACH HURTS.” Dallas: “MY NECK HURTS.” Miami: “EVERYTHING HURTS.” New York City: “THEY’RE GOING TO KILL ME.” Cutting through the noise and turmoil, Holmes’ heartbreaking project serves as a constant reminder of exactly the degree of violence and evil Black Americans are up against.

In June, protesters in Bristol took up the mantle of the George Floyd protests in spectacular fashion by ripping down a statue of the slave trader Edward Colston in their own hometown and tossing it into the harbor. In the aftermath, a British sculptor named Marc Quinn decided to create a statue of a Black Lives Matter protester named Jen Reid and erect it in the place where the Colston statue had stood for 125 years. Quinn’s statue wasn’t without its controversy (some felt the white artist was using this moment opportunistically) but the city’s decision to remove it after just one day was also read as a complicated gesture. This one episode is endlessly illustrative of how powerful Black figures are almost immediately besmirched or deemed unacceptable, whereas figures emblematic of whiteness and colonialism are permitted to stand unchallenged for centuries.

One hour. One work of art. Tomorrow at 10:00 a.m. try it out with our (virtual) “The Art of Looking” program. We’ll spend 60 minutes building on our first impressions of “I See Red: Target” (1992) by Jaune Quick-to-See Smith, an enrolled Salish member of the Confederated Salish and Kootenai Nation in Montana. By sharing observations, interpretations, questions, and ideas, we will broaden our understanding. The program is designed for everyone interested in talking about art—no art or art history background is required. Register via the link in our bio.

At the age of 80, Smith became the first Native American artist to have her painting added to the collection of of the National Gallery of Art in Washington, D.C. This fact alone illustrates just how much work this country has put into actively sublimating the artistic contributions of contemporary Native American artists, not just ignoring them. Standing 11 feet tall, I See Red: Target confronts the hypocrisy of using Indigenous identity as signifiers for commercial branding via layers of Warholian printed media and red paint.

This exhibition, which consists of Leonardo’s drawings depicting state-sanctioned violence and trauma inflicted upon Black, Indigenous, and People of Color, was originally supposed to be launched at MoCA Cleveland in June before being cancelled by the museum’s former Executive Director Jill Snyder, who has since resigned. Snyder’s justification for cancelling the exhibition was due to community outcry over some of the images that were included, but after Leonardo spoke out about his experience, The Breath of Empty Space has since been revived as an exhibition at MASS MoCA. Leonardo’s battle to get his work seen is just as important as his work itself, which explores what happens to memory when it’s filtered through a relentless news cycle.

This poster wasn’t actually made by Andrew Cuomo; it’s the creation of an artist named Rusty Zimmerman, who Cuomo frequently employs to assign visuals to any issues the state of New York might happen to be facing. And boy, is the state of New York experiencing some issues: nearly 33,000 potentially preventable coronavirus-related deaths, systemic violence carried out by the NYPD and severely deficient social safety programming. You wouldn’t know it from this poster, though, which shows you Donald Trump sitting on the moon, a Love Wins rainbow and a mysterious natural phenomenon called the “Boyfriend Cliff.” What? Exactly. 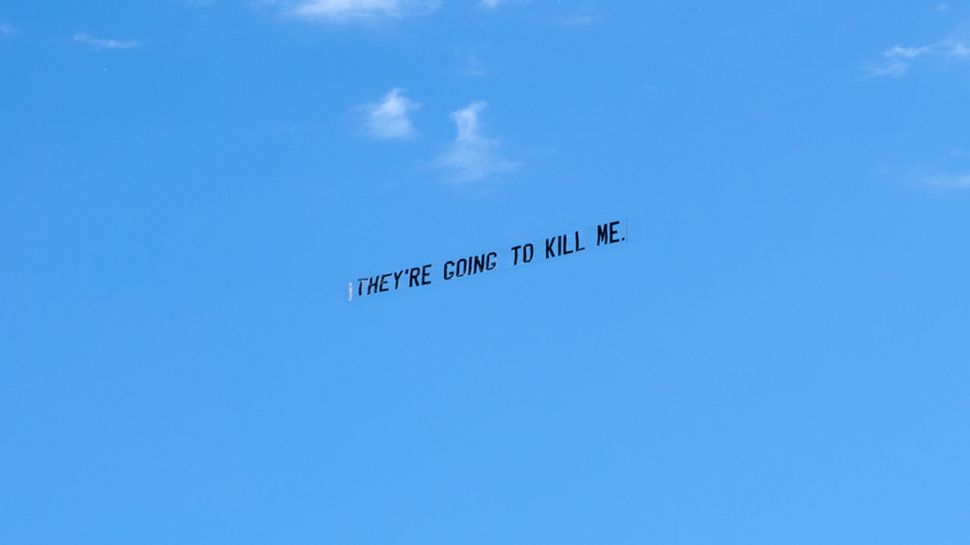