The LAPD is also currently looking for three other stolen Spencer paintings taken during the same robbery: Casino, Spring and Black River. When it comes to these other paintings, authorities do not yet have leads. Robert Spencer, who lived between the years 1879 and 1931, was a Nebraska-born American artist who originally studied medicine before deciding to focus his efforts on painting. For 25 years, Spencer lived and painted in Bucks County, Pennsylvania, where he created some noteworthy landscapes but mostly specialized in somber, muted portraits of common people accomplishing everyday tasks.

SEE ALSO: Frans Hals’ Painting of Gluttonous Youths Has Been Stolen for the Third Time

It’s unclear which exact year Canal or the three other missing Spencer paintings were completed, but the canvas of Canal shows villagers milling around what appears to be a bustling port in front of tall residential buildings. Casino, Spring and Black River also telegraph the artist’s skill for communicating loneliness, regardless of whether it was through images of a bustling crowd or a gnarled tree.

Spencer had an unfortunate struggle with mental health issues: after suffering several nervous breakdowns throughout the 1920s, the artist committed suicide in 1931. However, his legacy as a painter lives on in the collections of several different museums, including at the Metropolitan Museum of Art. 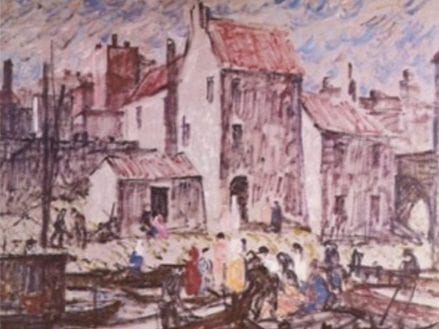