On Monday night, I went to a theater to see Tenet, but I’m not sure Christopher Nolan would approve. Nolan’s fastidiousness about the cinematic experience is the driving force behind getting Tenet into theaters at this uncertain moment, and his standards for theatrical exhibition are exacting. Although indoor theaters are open where I live in Las Vegas (including IMAX and other large-format options), I don’t feel comfortable sitting inside an enclosed space with strangers or two and a half hours.

So I chose to see Tenet at the local drive-in.

I was lucky to have that option, since Tenet distributor Warner Bros. has decreed (possibly in conjunction with Nolan’s wishes) that the movie won’t be showing at drive-ins in markets where indoor theaters aren’t also open. The message is clear: Seeing Tenet at a drive-in is a last resort, and Uncle Chris would prefer that you not. But for me, the choice was between seeing Tenet at the drive-in now, or waiting an unknown number of months and watching it at home. And certainly Nolan would rather I have my first experience in some kind of theater, at least.

So for the third time in less than two weeks, I headed to the West Wind Drive-In in North Las Vegas, where I recently saw a throwback screening of Pulp Fiction and just a few days ago watched the long-delayed superhero movie The New Mutants. From those experiences, I had an idea of what to expect from the drive-in, which prior to this month I hadn’t been to in years. When I saw Pulp Fiction, I found myself hastily scrubbing at my windshield with a napkin before the show began, so this time I drove through a car wash before going to the theater (and I still had one persistent smudge that remained in the corner of my vision).

I didn’t have any idea what was going on, but that was the movie’s fault, not the theater’s.

Pulp Fiction, which mostly takes place during the day or in well-lit spaces at night, looked pretty good on the drive-in screen, but the horror-tinged New Mutants is set mostly in dim corridors and features a climactic battle in a dark forest, and there were portions of that movie during which I was only vaguely aware of what was happening onscreen. From the previews, I gathered that Tenet would probably be easier to see, but given Nolan’s penchant for packing his films full of important expository details, I also figured I’d end up missing something. While my car has a decent sound system, it’s a factory-installed Toyota product, not Dolby Atmos, so I didn’t expect to feel the full effect of Nolan’s carefully crafted sound design.

I picked up some fast food (one advantage of going to the drive-in is that you are allowed to bring your own food) and arrived early, since West Wind doesn’t sell tickets online, and this was the first available showing of Tenet during its “early access” period. There were five or six cars ahead of me waiting for the box office to open, and even though I couldn’t talk to or even really see the other people, it still captured a bit of the excitement of waiting in line on opening night of a major blockbuster. I didn’t have to worry about whether any of them would intrude on my personal space or decline to follow regulations about wearing a mask.

Also, I didn’t have to wear a mask myself for the duration of a 150-minute movie (plus previews and the waiting time after arriving early). I sat comfortably in my car the entire time, aside from a brief bathroom break before the movie began (during which I wore a mask, per regulations, and didn’t encounter anyone else). Unlike some drive-in theaters in remote locations, West Wind is situated in a relatively dense area, across the street from a couple of hotel-casinos and adjacent to a private airport. The light pollution can be distracting, depending on which screen you are watching, but the hotel-casinos are currently closed, and the screen showing Tenet backs up against an empty lot.

So when the movie started, I could see it clearly, windshield smudge aside. The screens at West Wind aren’t as fancy as those in state-of-the-art indoor theaters, with a sort of corrugated design that gives the picture a grid-like background. But Tenet’s opening action scene featuring John David Washington’s character facing off against terrorists at a Kiev opera house was sharp and bright. I didn’t have any idea what was going on, but that was the movie’s fault, not the theater’s.

As reviewers (including Observer’s own Emily Zemler) have pointed out, Tenet is very confusing, and seeing it in a less-than-optimal setting doesn’t help. But I never felt that the presentation was hindering my understanding of the convoluted story, or that the sound was muffled or unintelligible because the system (broadcast to my car’s radio over an FM frequency) was inadequate. When a Nolan film is hard to follow, that’s usually by design, and if Tenet can be frustrating and tedious, that would be true in any setting. The all-encompassing theatrical experience can smooth over some of those flaws by its sheer enormity. Sitting in my car, I was less immersed, and maybe less inclined to forgive the narrative incoherence in favor of the spectacle.

Would I have enjoyed the experience in the auditorium, with my mask on the entire time, hyper-aware of everyone and what they were doing? I doubt it.

There were still little annoyances, of course, just as there are in a theater during normal times, when someone decides to narrate the film to their companion or turns on their cell phone or chomps their popcorn too loudly. I had to pull in my side-view mirror because it was distractingly reflecting the movie playing behind me. Since many modern cars are designed to automatically keep their headlights on while running, and some people can’t figure out how to turn their lights off, occasionally someone’s headlights would shine on the screen. Nolan’s decision to indicate certain timeframes by bathing scenes in red light made those scenes tough to make out, although nearly everything else was easy to see. Occasionally I spotted small planes taking off or landing at the nearby private airport.

Would the presentation of Tenet have been better at one of the indoor theaters in town? Sure. But would I have enjoyed the experience in the auditorium, with my mask on the entire time, hyper-aware of everyone else and what they were doing? I doubt it. Seeing Tenet at the drive-in was the right choice, and I’ll be back here to see Wonder Woman 1984 and Honest Thief and Candyman, assuming those movies stick to their planned release dates in the next couple of months. Sorry, Chris. 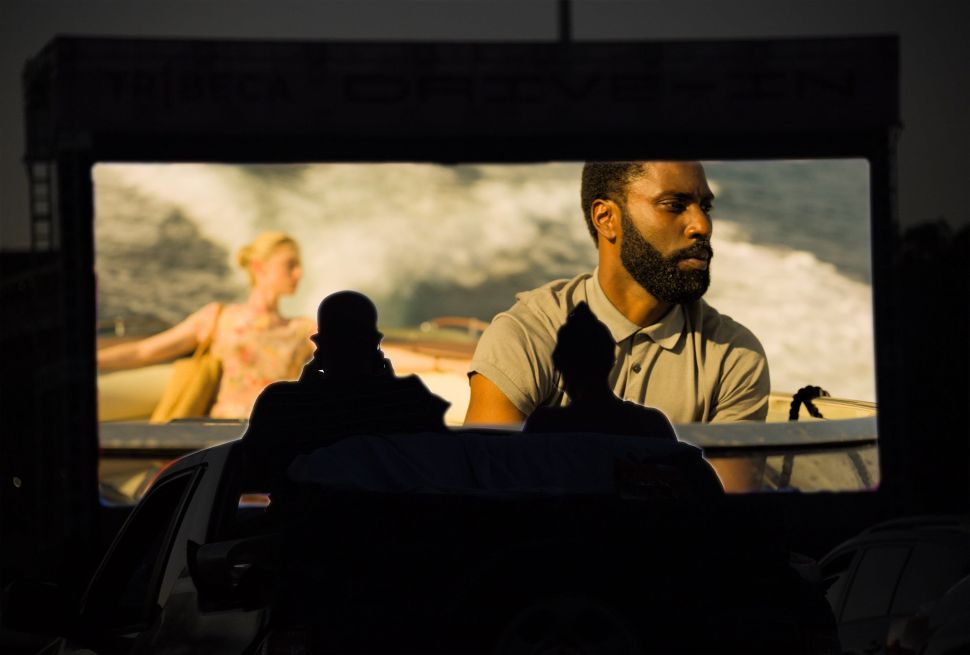