Season 2 of Amazon’s massively popular, uniquely entertaining and highly flawed subversive superhero series returns today. The ensemble comic book drama takes place in a world where superheroes are less the cat-out-of-a-tree do-gooders we expect and more commodified products mass marketed to the public by evil corporations. While Season 1 was a hit with fans and critics, it premiered 14 months ago. That’s a lifetime in the 24/7 pop culture news cycle. In that time alone, we’ve confirmed the arrival of three more Batman! You’d be forgiven if you’re a little fuzzy on who’s who and what’s what as you fire up Season 2.

So, to keep things simple, we’re running through all the important superpowered beings and what powers they have at their disposal.

A mute, feral member of The Boys (the good guys!) who shares a special connection with Frenchie. She has enhanced strength and regenerative healing ability. That means she can rip a dude’s head off with her bare hands and take quite the pounding before getting right back up again. She’s a badass and the only super-powered member of The Boys. Well, sort of.

Annie January, AKA Starlight, was an idealistic young girl whose mother pushed her into the superhero life from a young age. In awe of the Seven (the catchy superhero group name cooked up by marketers), she finally joins the team in Season 1 and quickly learn show far apart perception and reality truly are. Recognizing the evil of the Seven and their corporate benefactors the Vought Company, she works under the table with The Boys to bring them down. She’s a light-emitting superhero who can manipulate the electromagnetic signals of technology to produce blinding flashes and energy blasts. She’s also essentially impervious to bullets.

Oh boy, where to even begin? Leader of the Seven and the world’s greatest superhero, Homelander is essentially an evil version of Superman. Invulnerable to most attacks, Homelander can emit heat-vision laser beams out of his eyes, possesses super strength and speed, and has the ability of flight. He’s also a sadistic and arrogant man with debilitating mommy and daddy issues. He’s the total package!

A former idealistic hero who has become disillusioned and jaded by the corruption of the Seven, Queen Maeve is the closest thing The Boys has to Wonder Woman. She’s an excellent fighting warrior with super strength and invulnerability. She also has a conscience, which sets her apart from many of the other heroes even if she doesn’t always listen to it.

He’s the speedster of the group, a new-age Flash who is obsessed with remaining the fastest person on earth. Because of this compulsion, he begins injecting himself with Compound-V, the chemical that creates superheroes, eventually becoming addicted and putting a strain on his heart. He embodies the pressures put on superheroes in this cynical world, yet isn’t a sympathetic character by any stretch of the imagination.

The equivalent of Aquaman, The Deep can manipulate , breathe under it, and communicate with fish. Much like the early days of Aquaman, he’s considered a second class hero, even among the ranks of his fellow team members. He’s also a misogynistic asshole who propositions Starlight early on in Season 1.

Black Noir is a totally silent, Batman-esque ninja warrior who never reveals his face. He possesses superhuman strength and agility and kicks all sorts of ass without ever uttering a word.

A newcomer to The Boys, Stormfront proves pivotal in Season 2 and Cash, coming off the excellent You’re the Worst, plays her to perfection. Her character doesn’t play by Vought’s rules and aims to shake up the status quo upon her arrival. As suggests by her name, she’s got weather-like powers, able to conjure lighting and the sort. 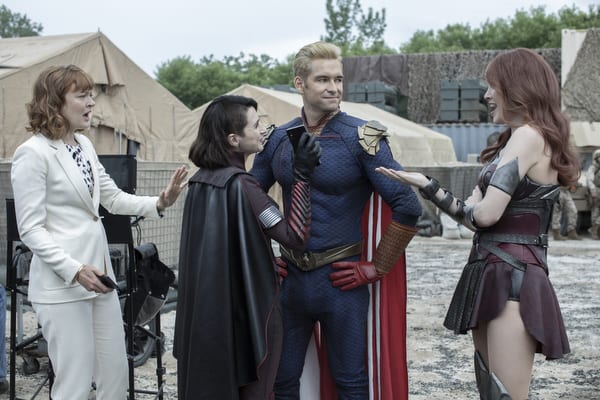