Due to the ongoing coronavirus pandemic, film distribution has never been more fraught with uncertainty. As movie studios attempt to navigate the minefield of the marketplace, we’ve begun to see new strategies and approaches emerge. Universal opted to send its $100 million animated feature Trolls: World Tour directly to premium video on demand in April and came away with encouraging results. Of course, the studio also delayed all of its major blockbusters, including the ninth Fast and Furious film, until 2021. There doesn’t seem to be one single right answer at the moment.

Many of the most important films of the foreseeable future will experiment with their releases to find the optimum combination that maximizes profit (sorry, Tenet). The best example of this experimentation so far is Mulan, which Disney has released for $29.99 via Disney+ Premier Access in the 20-plus regions where the streamer is active. In international markets that are safely reopened, such as China, Mulan is playing on the big screen.

With Disney emphasizing its direct-to-consumer business above all else while still trying to turn a profit on the $200 million live-action remake, all eyes have been tuned into Mulan‘s performance. However, the early returns are difficult to judge.

According to app download research firm Sensor Tower, Mulan drove an increase of 68% in new downloads of Disney+ from Friday Sept. 4 through Sunday Sept. 6. However, subscription metrics firm ANTENNA sees it a little differently. According to their data, Mulan drove twice as many daily sign-ups to Disney+ in the U.S. as the previous four weekends, but generated just one-tenth of the sign-up demand that Hamilton produced during its July 4 release. 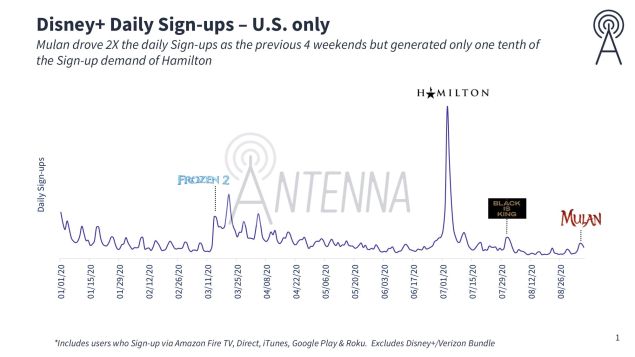 “The key metric here is purchase, which is what ANTENNA measures,” Rameez Tase, co-founder and CEO of ANTENNA, told Observer. “Viewership is an increasingly antiquated proxy for purchase behavior. The measurement of success in any industry that relies on consumers directly spending their dollars on goods and services is oriented around purchase behavior, and we believe that the future of media will be no different.”

To that end, the new sign-ups driven by Mulan may not have resulted in as many additional $30 purchases as hoped. According to ANTENNA data, two-thirds of Mulan purchases came from users who have already been subscribed to Disney+ since 2019 while Mulan‘s opening weekend sign-ups accounted for just 4% of purchases.

But new sign-ups are still paying the $6.99 required by Disney+ subscriptions. Around 30% of new sign-ups who joined Disney+ for Hamilton cancelled their plan within one month. If Mulan‘s new sign-ups track anywhere close to that churn rate, it will still bring in additional subscription-based revenue even if these new customers aren’t buying Mulan, which will hit Disney+ proper in December. So there’s a longer term monetary factor to consider in addition to Mulan‘s raw purchase numbers. 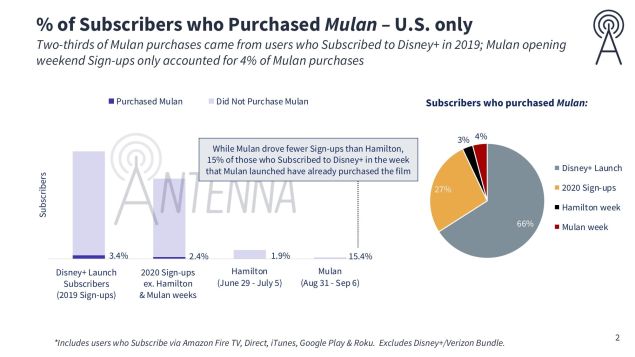 According to Box Office Mojo, the film has earned $36.7 million in traditional theatrical release thus far. But if we want to jump into the dollar amount of Mulan‘s release on Disney+ Premier Access, we’ll have to further rely on third-party metrics unconfirmed by Disney.

SambaTV, which only tracks Smart TVs and extrapolates data from there, estimated that 1.12 million U.S. household accounts watched Mulan over its four-day opening weekend (September 4 to September 7). With each account paying $29.99 for Premier Access on Disney+, that results in at least $33.5 million domestic for Mulan‘s opening weekend. With a theatrical release, studios generally split about 50% of ticket sales with exhibitors. With traditional PVOD releases, such as Trolls, studios receive an 80% cut of revenue. For a release via Disney+ without any third-party platforms such as Google or iTunes, Disney would receive 100% of the revenue generated.

However, this $33.5 million figure, if accurate, has generated polarizing responses. Rich Greenfield, partner and TMT analyst at LightShed Partners, described that total as an “unmitigated disaster.” Meanwhile, Forbes box office analyst Scott Mendelson graded it as “good” since it was relatively on-par with the film’s projected $80 million-$90 million opening in March in terms of Disney’s share of revenue. We won’t know how accurate that $33.5 million figure is until Disney’s next earnings call in November.

What we do know is that we need to develop new metrics of success for this new era of entertainment. If Mulan fails to turn a profit on its $200 million production budget and an expected $100 million-plus in marketing costs, but retains a majority of its new Disney+ subscribers long-term, will that be deemed a success or failure? We are at the onset of a paradigm shift and what’s to come will help sort out the future hierarchy of the industry.