When you’re thinking about examples of objects that may not initially have been considered “artful,” but which grew in cultural esteem and market viability over time, Nike Air Jordans are a classic phenomenon to point to. In the past, Michael Jordan’s worn Air Jordan 1s have sold at auction for record-breaking amounts of $560,000, and now, a current installation at the Brattleboro Museum & Art Center in Vermont is drawing attention to the unique role these shoes have played in history since they were first manufactured. Andy Yoder’s exhibition “Overboard,” consists of more than 240 sculptural replicas of size 13 Air Jordan 5 shoes that have been handmade from found consumer packaging.

Specifically, the installation is a response to a 1990 incident wherein a container ship en route from Korea to the United States encountered a storm, and subsequently spilled 61,820 Nikes directly into the Pacific Ocean. In the aftermath, beachcombers and sneaker enthusiasts searched ardently on several different beaches for washed-up pairs of shoes, and oceanographic studies were generated to focus on the environmental impact of rampant consumerism upon the planet. The shoes the artist has created out of recycled materials are therefore both tongue-in-cheek and deadly serious; they’re as much engaging in consumer culture as they are rejecting it in search of something more meaningful.

“The issue of how consumer culture affects the environment isn’t new, but it has become politicized and suffers from message fatigue,” Yoder said in a statement. “Hopefully the visual impact of the exhibition, and the decision to explore things through the lens of sneaker culture in a visually playful manner, will present the issue in a way that is fresh, and as a result more impactful.” The shoes will be on view through March 6. 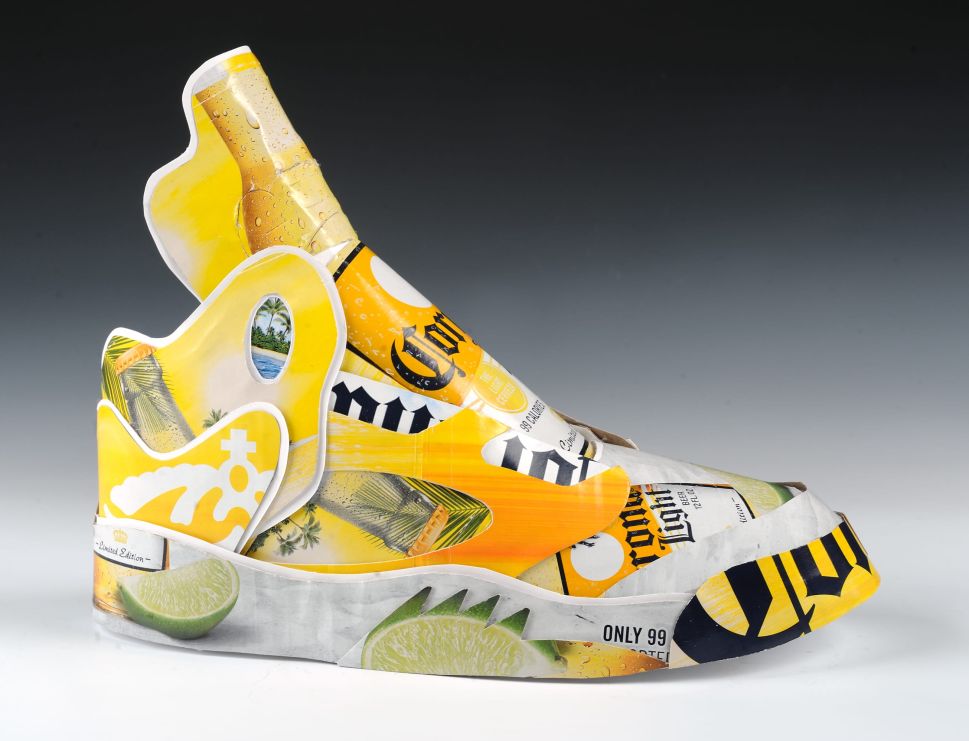