Although the fugue state wrought by Trump trauma and pandemic fatigue has melted all the clocks, Anne Washburn’s Shipwreck induced a fresh wave of when-am-I perplexity. This liberal fever dream is set in 2017, but listeners are bound to think of the electoral present. Stranger still, the play-turned-audio-drama propelled my thoughts into the future. In a couple of years, will we look back…in gratitude? Will we point to Trump as the rock bottom we needed to hit in order to swim to safety?

Shipwreck is the first theater piece I’ve seen (or heard) that posits Trump as the satanas ex machina who could save American progressivism from its whiteness, its politeness, its mania for compromise. He’s the hideous reflection that makes us smash the mirror and forsake illusory binaries of liberal and conservative. Not for nothing does the story end (no spoiler) with friends gathering in awe on a frozen pond at midnight. The ice needs to break.

“Maybe the Good Guys are not, in fact, the Right Guys,” muses Luis (Raúl Esparza), a gay Latinx lawyer, during a tense, snowbound dinner party. “And maybe it takes a clown to destroy the structures and maybe we only let that happen when we’re laughing, when we’re entertained—and make no mistake everyone in this room is on some level deeply entertained.”

Luis and his partner, Andrew (Jeremy Shamos) are at an upstate housewarming that lacks proper food, booze, and, eventually electricity. Jools (Sue Jean Kim) and Richard (Richard Topol) just closed on a cozy pile that dates back to 1776, with a strong boiler and sound foundation but unspecified trouble with the roof (allegory alert!). Also present are crunchy-granola spouses Mare (Mia Barron) and Jim (Rob Campbell), fresh from assisting a home birth. Lastly, there’s freaked-out slacktivist Allie (Brooke Bloom), the one who ends up unloading about Race and embarrassing everyone. Allie loathes Trump and his cabal with a flamethrower rage that she eventually turns on herself and everyone around her.

As for Jools, while she’d never vote for Cheeto Jesus, she does echo Luis’s desperate fatalism with the notion that all this social and political chaos “doesn’t have to be a demolition site…It can be a construction zone.” Mare quickly points out that that’s a privileged position to speak from, and the Democratic self-cutting games resume.

These chatty, often funny scenes bleed into monologues from a past owner of the farmhouse named Lawrence (Bruce McKenzie), who adopted a child from Africa, and a pair of vignettes featuring Trump (Bill Camp) and other figures ripped from CNN. One is a pompous, Ayn Rand-ian melodrama about Trump meeting with President George W. Bush (Phillip James Brannon) on the eve of the 2003 Iraq War (a fantasy that Trump brazenly invented during debates). The other is a skin-crawling, gothic dramatization of the infamous “loyalty dinner” between Trump and Comey (Joe Morton), with echoing footsteps, sinister string music, and the acoustics of a dank, cavernous vampire’s lair.

Shipwreck has an interesting provenance. First produced in February 2019 at London’s Almeida Theatre, it seemed, from afar, to be the bold Trump Era thinkplay we needed, but which the tricksy British commissioned first (Washburn is American). A revised version opened in February at Washington D.C.’s Woolly Mammoth, just before lockdown. And so this scheduled Woolly-Public Theater New York debut was converted to audio, and Washburn heavily revised the script. Along the way, the dense, three-hour epic lost about 30 minutes, and the free podcast has been deftly parceled into a trio of digestible parts by the canny director-adapter Saheem Ali.

You may want to binge the beast in one go; you can also dip in on successive days. Admittedly, it’s not always an easy listen. Despite mind’s-eye-filling sound design by Palmer Heffernan, you may strain to distinguish the liberal chattering heads. The lack of a conventional plot or authorial POV loading the ideological deck may exasperate some—Washburn is not here to give a lecture when she can fling out a dozen—but bewildering polyphony is part of the pleasurable flow. Washburn (Mr. Burns: A Post-Electric Play) is such a protean thinker and weaver of witty, impacted dialogue, I’d rather wade through her brain-dump than a dozen smug, self-plagiarizing polemics from Aaron Sorkin.

In a way, Shipwreck is theatrical sister (or wise older aunt) to the recently praised Circle Jerk (online through November 7). The latter, a gay, identity-politics satire, is faster, queerer, and infinitely meme-ier, but it also stages violence at an inflection point: breaking a system before the system breaks us. In Circle Jerk, right-wing gay disruptors try to weaponize social media memes to achieve world dominance. Shipwreck leaves us so disoriented and, yes, demoralized, that we don’t know whether Trump is an angel or Antichrist, Frodo or Gollum. Such revolutionary, apocalyptic fervor links Jerk and Shipwreck to Heidi Schreck’s What the Constitution Means to Me, which ends, after all, with an audience-interactive debate about whether we should shred our nation’s founding document to have a future.

All these works extend the boundaries of what critic and director Sara Holdren has aptly tagged “Exorcism Plays” (e.g., Slave Play, Marys Seacole, Heroes of the Fourth Turning). They show theater artists refusing to regurgitate newsy talking points or the leftist filters to critique white heteropatriarchy or ecocidal oligarchy. Instead, these writers and directors are digging into a deep-soil fungal network of myth, dream, erotics, and epigenetic trauma to dissect social and political realities. Their aesthetic tactics are usually episodic, antirealist, and resistant to closure. What I sense here is an urge to go beyond exorcism, but can you put a stake in a demon’s heart?

Shipwreck toys with the future tense, but who knows if it will last? Regardless, Washburn should be celebrated for drilling down into a moment four years ago, and running tests on the core sample. What seems destined to date could be prescient. Don’t be surprised if, in a few years, we agree that Donald Trump was the worst thing to happen to the GOP and the best thing to happen to the American left. Progressive people are energized as they haven’t been in decades, talking about deep structural change, and they’re not looking back. That’s what artists do. 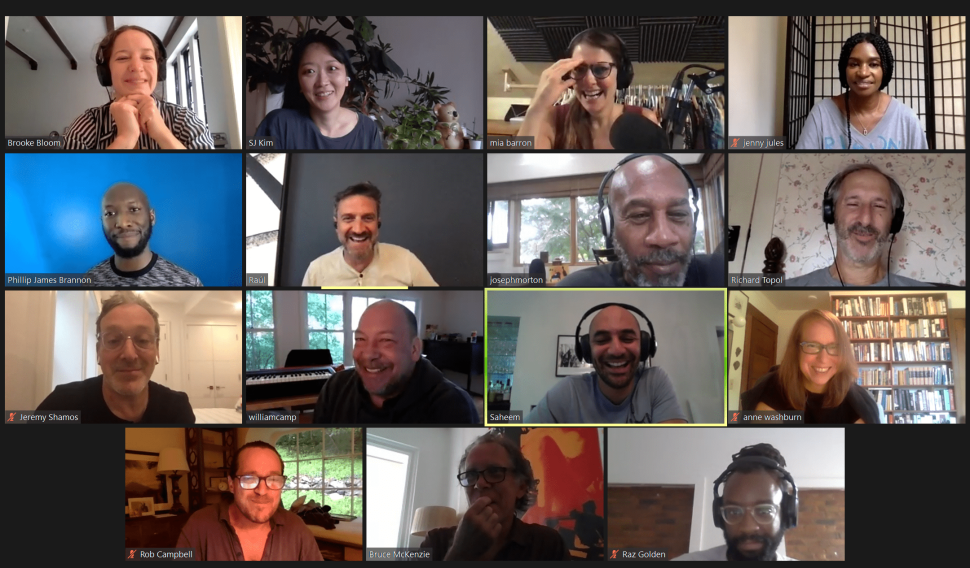