Created by Charley and Vlas Parlapanides (Immortals, Death Note), Blood of Zeus, the latest Netflix original animated series that launched on the service last week, follows a commoner named Heron, who lives with his mother Electra in a nameless town somewhere outside Greece. Both the young man and his mother are shown nothing but distrust and disdain by many of the villagers, who believe they have brought them nothing but misfortune. The only person who shows them any kindness is an old man named Elias. That old man turns out to be none other than Zeus, the ruler of Olympus in disguise. The deity, who goes by many names, has always been there for Heron and his mother because he is in fact, Heron’s father.

Zeus has been keeping Heron and his mother hidden from his wife Hera. The God of Thunder has not been faithful to his beautiful and extremely powerful wife over the years, and Olympus is populated with the fruits of his infidelities. Once she discovers that both the mother and the child are alive, Hera decides that seven bastard children is seven too many, and sets out to destroy Zeus, even if that means destroying Olympus along with it. To accomplish this, she forcefully recruits Seraphim, a half-demon who carries a golden bident, for a mission of vengeance.

In exchange for helping her vanquish her unfaithful husband, Hera promises the demon the missing piece to complete his own quest for revenge. Seraphim serves as the main antagonist for Heron, their connection going deeper than just mere adversaries, and is quite obvious by the first quarter of the series just how much. Now that Heron knows his past, he must come to terms with his destiny, and that is to save both the Earth and the Heavens from oblivion.

As in Castlevania, this series unleashes an over-abundance of bloody violence and gore. Gods, giants, humans and even birds meet gruesome ends; this series’s specialty seems to be death by bifurcation. These moments mainly take place in the series many action sequences, which are usually the highlight of any Powerhouse show. They are all well choreographed and contain some winning displays of effect animation, however, they possess none of the flair and acrobatics seen in Castlevania—a mild disappointment considering that we are dealing with beings that possess substantially more power than vampires and the people who hunt them.

The best aspects of this series actually come from the animator’s magnificent portrayal of ancient Greece, and the genre-appropriate score that follows our hero’s journey. Familiar places like Mount Olympus and especially the Underworld are superbly rendered, and original locations, such as the Field of the Dead, a mist covered battlefield where the giants and gods dueled, its soil poisoned by the blood of fallen giants, make me intrigued to see what other secrets this world holds. The score, full of triumphant horns and confident brass, would not be out of place in a classic Hollywood sword-and-sandals epic like William Wyler’s Ben-Hur, lending the series a gravitas and importance that is almost non-existent in its characterization and story.

That’s where Blood of Zeus feels weakest. We watch as many characters die, yet we care for none, even the few the series deem as important. Like Castlevania, every character speaks in the same self-serious, emotionless tone, making it seem as if instead of fire, Prometheus should have delivered humanity some personality instead. Heron is a blue-eyed bore, the other human characters not faring much better; even the gods, with the exception of Zeus and Hera, who are all beautifully designed, aren’t allowed to do or say much until it’s time to start punching. Also, what befuddled me as the story got to its main battle was why, in a series that pits the Greek gods at war with giants and even amongst themselves, there was no mention of Athena, the goddess of war? It would have at least given the series another prominent female character, as all of the major gods on either side are men, with the exception of Hera. The other two major female characters—if they could even be called that—barely make themselves relevant in this story. Electra is merely a passive victim, and Alexia, an Amazonian, takes up considerable screen time in the early episodes, but gets pushed aside once Heron has to undergo his Jedi training.

In an interview leading up to the series premiere, the Parlapanides brothers said that their script for Immortals became more of director Tarsem Singh’s vision after a rewrite and that this series was entirely theirs, but it feels like a rip-off of George Lucas’s. There is too much Star Wars in Blood of Zeus. After a few episodes, it becomes effortless to pinpoint which character is based on Luke, Obi-Wan, Leia, Han and Chewie. A meeting with the Fates is taken right out of The Empire Strikes Back, and even the sword that Zeus forges for his son, made out of a special ore that can cut through anything, is obviously just what passes for a lightsaber in this version of mythological Greece. It’s all too much and too transparent.

What the Parlapanides brothers and Netflix have here could be something special. These characters have inspired everything from pottery to film to popular indie games. But what keeps this series that is focused on supreme beings so mortal is its persistence in regurgitating tropes that have been done to death over the past half century of popular culture. To quote a latter-day Star Wars character, it’s time to “let the past die,” if the creators truly want to re-introduce and revitalize these characters who were first introduced to humans thousands of years ago, it’s probably best to stop xeroxing pop culture from the last 50 years.

Blood of Zeus is now streaming on Netflix. 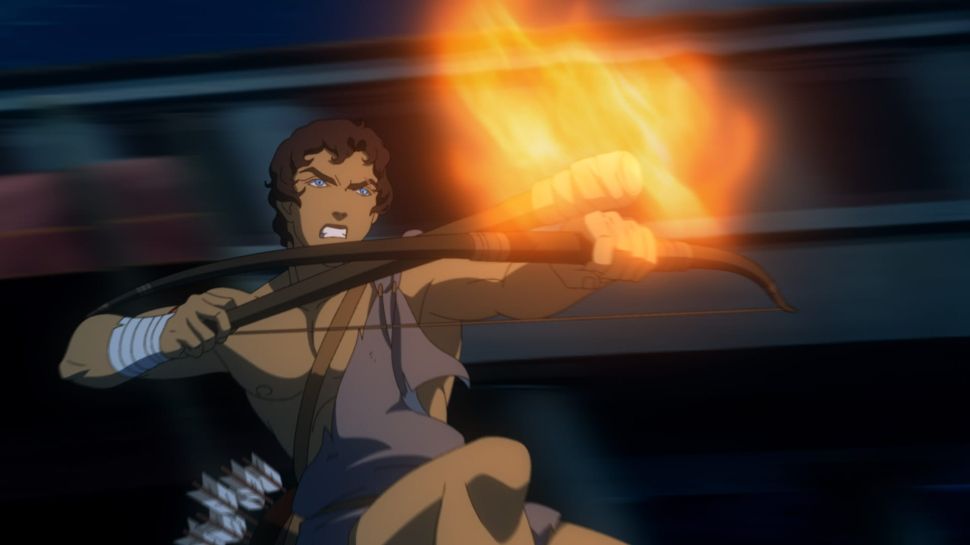