Beyond the world of art, David Hockney, 83, is known as the man whose 1972 painting, Portrait of an Artist (Pool with Two Figures), set an auction record two years ago for the highest price paid for a work by a living artist, $90.3 million.

That kind of celebrity fills museum galleries, and it’s likely to happen at the Morgan Library and Museum for “David Hockney: Drawing from Life” (Oct. 2, 2020 to May 30, 2021). Still, instead of pulling out the obvious crowd-pleasers, the Morgan opts for the intimate—it meets Hockney where he began, as a working-class kid who could draw. The show tracks Hockney the restless draftsman as he draws incessantly on whatever paper is there, pausing only to smoke, and concentrating on himself and those close to him—parents, lovers, friends.

“I was at art school in England when they abandoned drawing, they abandoned teaching it, which I thought was the worst thing of all,” he recalled in a talk to an audience of architects in California in 1988. “Frankly, I always blamed it on Frank Stella who said that you could have painting without drawing.”

Drawing for Hockney has been more than that term suggests. He draws with what’s there—typical  for students with no money—but he’s anything but a Luddite. He would argue that his photography, which interlocks photographic elements into neo-Cubist ensembles, is a form of drawing. He’s also been an early digital adopter, one of the best-known artists to take up the iPad. The results glow on the wall.

“With watercolour I would have to go and get , brushes, paint and things,” he told a Dutch critic last year in an interview for the catalog of the van Gogh Museum’s exhibition “Hockney/van Gogh: The Joy of Nature.” “Now I didn’t have to get out of bed, I could even draw in the dark.”

Two 1954 self-portraits from schoolboy days point to the parallel lines of “David Hockney: Drawing from Life”—dutiful attention to fundamentals and history, and whimsical invention.

In one, a teenager with large glasses and brown hair (before Hockney bleached blonde) looks straight ahead as he fixes his school tie, seemingly adhering to someone else’s rules.

Another self-portrait, a collage on now-faded newsprint—a cheap, found material—shows the unsmiling boy with brown hair and larger glasses, but with a yellow tie, red scarf, checked shirt and a sky-blue jacket. If it wasn’t a hint that color was destiny, it promised a dandyism that has gone in and out of Hockney’s work (mostly in) since then.

Hockney recalled in an interview with the show’s London curator that, a few years later, “there was a skeleton in the studio and I thought, ‘I’ll draw that.’ I took two weeks over it and I drew it carefully in a very detailed way. Then my friend, Ron Kitaj [the artist R. B. Kitaj], who was also at the Royal College, bought it for £5, which was OK by me. You could live for a week on £5 back then.”

The exhibition went virtual when the National Portrait Gallery in London locked down this spring. Visitors to the Morgan get the in-person experience of more than 130 works, if you count Hockney’s iPad drawings.

Besides Hockney himself, the recurring figures that he’s drawn are his mother, the textile designer Celia Birtwell, his former lover and current curator Gregory Evans, and the master printer Maurice Blaine.

Two other figures are nearby as influences—Pablo Picasso and Vincent van Gogh. The 1973 etching The Student: Homage to Picasso shows a long-haired Hockney with a large drawing portfolio standing next to a massive dark-haired head of a young Picasso atop a pedestal. Let’s not forget that Picasso died in 1973.

In another etching, Artist and Model, 1973-4, the Hockney-imagined Picasso is bald, wearing the striped shirt known from countless photographs taken of him with Francoise Gilot. A nude blonde Hockney sits across a table from him, arm outstretched, as if the younger man is asking to be remade in the master’s hand.

Hockney’s drawings of Celia Birtwell from the 1960s retrace the gently colored outlines of Picasso’s portraits of his first wife, the Russian ballerina Olga Khokhlova, from around 1920. Then and later, Hockney makes sure that you see Celia as being a lot more fun than the dour Olga.

Friendship and frankness follow Celia through radiant beauty (and nudity) in those drawings to her late seventies in 2019, when Evans and Blaine also sat for the artist.

We see red-headed Gregory Evans as a pale nude teenager in 1975, a renaissance image except for the white floor molding by his feet. 45 years later, his drawing of Gregory in glasses in a chair looking straight ahead in 2019 feels inspired by van Gogh’s paintings of his stolid neighbor, Postman Joseph Roulin, with a hint of Chuck Close.

It sounds like the ultimate cliché, but the pictures tell a story. “I’ve always been deeply interested in narrative. I didn’t go along with the modernist notion that narrative was gone,” Hockney said in his 1988 talk to architects.

In a self-portrait in charcoal from 2002, at 62, Hockney is without his signature glasses, and the picture lacks another signature element, color. You feel him tapping into Rembrandt in a picture shorn of anything superfluous. But look a few years ahead and, even as Hockney has lost much of his hearing, his eyes are almost always a bright blue, still restless, still looking ahead.

“I was always told it’s the journey that counts, not the destination,” he told the architects in California in 1988, “We seem to know where we’re going. We all end up the same way.” 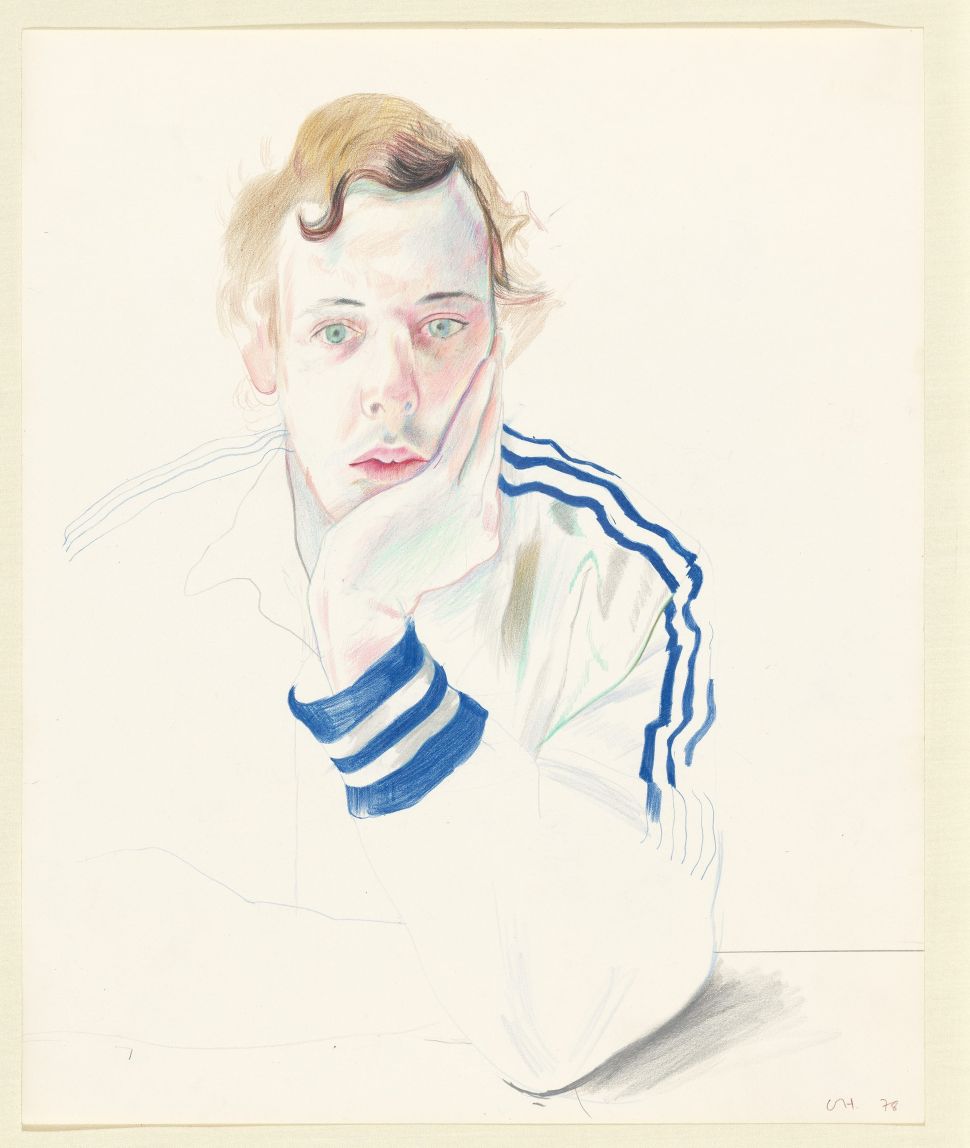