The first four Met Stars Live in Concerts went just as planned, but then our chaotic world stepped in. Two September concerts were slated to take place in Spain; one was moved to Germany, the other postponed until January. Then Anna Netrebko, who was tapped to headline the October 10 presentation, was hospitalized with COVID-19. She has recovered and will be performing in February. Recitals finally resumed this past Saturday in Italy (which has just shut down all its theaters for at least a month), with a performance by Diana Damrau and Joseph Calleja. After its shining early successes, it may have been inevitable that Met Stars Live would stumble: this week’s pair proved fundamentally mismatched with the soprano’s parlous vocal state particularly disturbing.

Damrau came to the Met in 2005, Calleja a year later and while both soon became local favorites scooping up new productions and HD transmissions, they had only appeared there together in a routine Rigoletto revival more than eleven years ago. Their tentative interactions in the Royal Palace of Caserta’s ravishing Capella Palatina made one wonder why they’d been paired up to begin with. Perhaps because each has just released a new CD—as brief advertisements at the beginning of the stream reminded viewers?

As the 90-minute concert proceeded it became increasingly clear that the German soprano and the Maltese tenor are markedly different sorts of artists. In a world missing tenor thrills from the likes of Luciano Pavarotti and Plácido Domingo, Calleja’s initial appearances were heralded for their secure, full-throated generosity. His stolid dramatic portrayals could be blandly unengaged as he was most content pouring out golden sounds. A very distinctive quick vibrato may upset some, while reminding others of early-20th century tenors familiar from old 78s.

On the other hand, Damrau burst onto the scene as a high-voltage coloratura liberally scattering diamantine high notes singing Mozart’s Queen of the Night and Zerbinetta in Ariadne auf Naxos. Her mercurial stage appearances were animated by such high energy that they sometimes verged on the manic. Gradually she softened her stage persona and the bright, chilly voice gained warmth.

However the past few years have been marked by frequent cancellations reportedly due to stubborn bronchitis. When once Damrau used to toss off the Queen’s high Fs with abandon, now most any note at the top of the staff or above emerges as weak and strained. The past forcefulness and freedom of her singing has been replaced by a highly careful manner aimed at disguising its alarming fragility.

Their divergent performing styles were immediately manifested in the Tosca love duet, Saturday’s first selection. Many were shocked to learn that the soprano was tackling Puccini’s grandly fiery prima donna. Sure enough, my dismay at her lightweight Tosca brought to mind the opprobrium of some greeting Damrau’s appropriation of the highly demanding Donizetti “Tudor Queens” on her new CD.

In buoyant voice, Calleja gallantly deferred to his overparted colleague who acted up a storm hoping to persuade viewers she hadn’t taken on a role several sizes too big. Damrau’s timid “Vissi d’arte” was then uncomfortably placed after Calleja’s ardent and appropriate “E lucevan le stelle!”

Their lack of chemistry dragged down a comic duet from L’Elisir d’Amore especially when one remembered the effortlessly bubbly Elisir excerpt offered by Aleksandra Kurzak and Roberto Alagna during their Met Stars Live appearance. Damrau sounded most comfortable—and unchallenged—as Micaëla in the Carmen duet, her wisest “first” attempt of the afternoon.

In his own inimitably awkward way during a chat with guest-host soprano Angel Blue, Peter Gelb saluted Damrau’s bravery in taking on Tosca and other new music for the stream. But further foolhardiness surfaced when she launched into the dazzling showpiece “Bel raggio” from Rossini’s Semiramide. Anyone who recalled her past crystalline roulades must have been shocked by this plodding, effortful bel canto exercise.

After Damrau’s strenuous operetta number from Kálmán’s Gräfin Mariza and Calleja’s expectedly stentorian “Granada,” they did blend nicely for a touching “Non ti scordar di me” which Calleja referenced in remarks expressing hope that worldwide opera fans were not forgetting the many performers silenced by the pandemic. A well-intentioned if awkward Bach/Gounod Ave Maria duet then concluded an unsatisfying hour-and-a-half which a more forthright accompanist than Roberto Moreschi might have aided.

While it’s become a commonplace for the prima donna to change her dress at least once, the swift pace of the Caserta concert made this impractical. But Damrau’s fashion fervor compensated with an ever-changing kaleidoscope of seven shrugs, shawls and wraps plus a shifting pair of broaches adorning her basic black gown. Actually, the accessory parade proved a welcome distraction.

The next Met Stars Live concert will feature another soprano-tenor team but one more likely to be on same wavelength than Damrau and Calleja. In the past several years Pretty Yende and Javier Camarena have appeared together at the Met in La Fille du Régiment and Les Pêcheurs de Perles and they’ll attempt to recapture that magic in an all-Donizetti program on November 7. 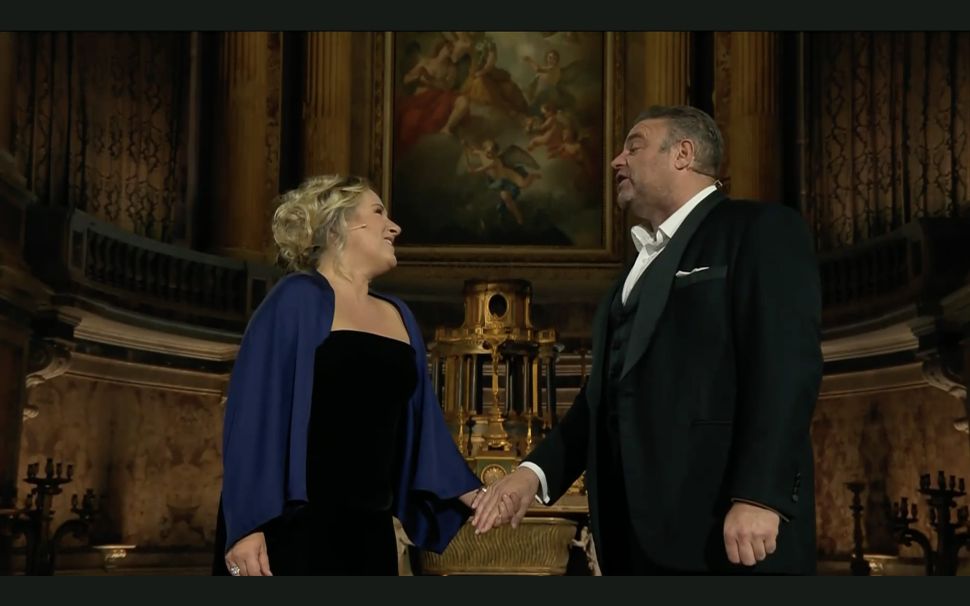