Pixar’s Soul, originally scheduled for a summer release before being delayed to November, will now arrive exclusively on Disney+ December 25. In international markets where Disney+ isn’t currently or soon to be available, Soul will be released theatrically, with dates to be announced. And just like that, another fascinating piece of the cinematic pandemic puzzle falls into place.

“We are thrilled to share Pixar’s spectacular and moving Soul with audiences direct to Disney+ in December,” said Bob Chapek, Chief Executive Officer, The Walt Disney Company. “A new original Pixar film is always a special occasion, and this truly heartwarming and humorous story about human connection and finding one’s place in the world will be a treat for families to enjoy together this holiday season.”

Disney is releasing Soul directly to Disney+ and not through its premium video on demand channel Disney+ Premier Access, such as it did with Mulan, a decision that speaks volumes.

The $200 million live-action remake failed to justify the PVOD experiment. Now Disney is pivoting, using Soul as an attractive original feature to drive new subscription growth over the holiday season. (There’s a reason Netflix previously dropped The Witcher and Bird Box in December—those quarterly numbers matter!) At the same time, it will arrive in overseas theaters in regions where Disney+ does not yet currently have a foothold in a hybrid release strategy. Yes, that undercuts its box office upside significantly. But would Disney be pleased with roughly $300 million in overseas ticket sales while Soul attracts new Disney+ sign-ups at a rate between Frozen 2 and Hamilton? 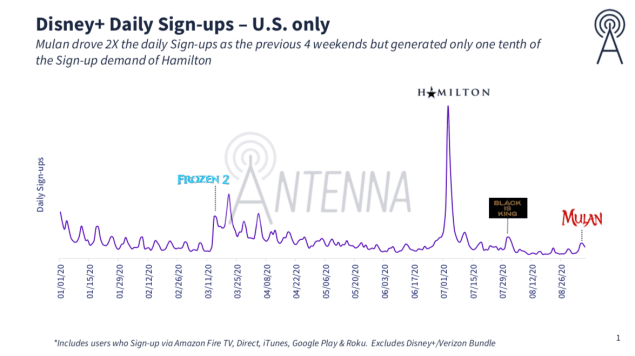 Remember, former Disney CEO Bob Iger emphatically stated that Disney+ and direct-to-consumer business is the company’s top  priority overall. According to Antenna data, roughly 70% of the new sign-ups Hamilton generated did not cancel their subscription within their first month. If Soul falls anywhere near that rate, it will be on its way to paying off.

Disney+ recently fell behind HBO Max in initiated streams in Q3, according to Reelgood. Outside of The Mandalorian, the streamer is largely bereft of content that cuts through the clutter and appeals to mass audiences outside of Disney’s core kid-friendly demographic. Its $1 billion original content budget for its first year is smaller than each of its major rivals.

There are more than two dozen upcoming originals in development, including seven blockbuster Marvel miniseries and at leasts two more live-action Star Wars shows, all of which will help boost engagement and attraction. But the service is still in need of original jolts in the short-term.

“The world can be an exhausting and frustrating place – but it’s also full of unexpected joys, even in seemingly mundane things,” said Pete Docter, director of Soul and Chief Creative Officer of Pixar Animation Studios. “Soul investigates what’s really important in our lives, a question we’re all asking these days. I hope it will bring some humor and fun to people at a time when everyone can surely use that.”

Sending Soul to Disney+ rather than delaying it substantially increases the risk of financial losses overall. Excluding Onward, which arrived one week before theaters shut down, three of Pixar’s last five films have surpassed $1 billion at the global box office. But sacrificing immediate box office profit empowers Disney’s single most important long-term asset and its only bright spot during this crippling pandemic. The house that Mickey built is in a unique position compared to other studios. With a bounty of upcoming surefire blockbusters ranging across its war chest of high-profile brands, the studio has enough ammunition to experiment with hybrid releases such as this.

Soul‘s removal from the release schedule is another blow to movie theaters, but the right call for Disney and its long-term success.