This piece contains spoilers for “The Romance of Certain Old Clothes.”

The Haunting of Bly Manor shares a lot of similarities with Mike Flanagan’s previous show, The Haunting of Hill House. There’s the returning cast, the themes of grief and trauma in ghost stories, and the standout and mostly standalone episode that features vastly different filmmaking than the rest of the season.

Where Hill House used episode 6, “Two Storms” to tell a story that looked shot in one single take, episode 8 of Bly Manor takes us back in time to adapt Henry James’s “The Romance of Certain Old Clothes” and tell a beautiful and haunting story of love, abandonment, grief, all presented in black-and-white. “The Romance of Certain Old Clothes” is definitely the standout episode of Bly Manor, so we reached out to episode star, Kate Siegel, and cinematographer James Kniest to discuss the episode.

The episode takes us back to the 17th century to tell the origin of the titular Bly Manor, as well as the many ghosts that haunt the manor. To tell the story, cinematographer James Kniest took inspiration from a variety of sources. “I came in halfway through the season and took over for Maxime Alexandre,” Kniest told Observer. “One of the first things I was told was that they wanted to make an episode in black-and-white set in the 17th century, and that got me excited. The format harkens back to traditional horror movies from the past, and we looked at movies like The Lighthouse as a reference, and took inspiration from film noir.”

Though they both joined Bly Manor late in the season, Siegel is definitely no stranger to the Haunting anthology series, having played Theo in Hill House. “This was a very different experience than Hill House, particularly in my characters,” Siegel explained. “Theo was a good guy, a victim of grief. Viola is a straight-up, old Hollywood monster. So it was fun to decide how to tear down this glamorous character with such gorgeous dresses until she becomes Nosferatu. We wanted to reference that a lot, the old Universal Monsters with Viola’s breathing and grasping.”

The Universal Monsters look permeates through the whole episode, with the lighting, makeup effects, and even set design evoking that old style of horror filmmaking, creating a visual style that matched Viola’s own state of paranoia and abandonment during the episode. According to Kniest, the black-and-white influenced the entire look of the episode. “The format lends itself to using stronger and more robust shadows,” Kniest said. “So inherently you can use much harder light because of it, and that’s how they did in old-school movies. They never put big diffusion frames or other stuff in front of their lights as they do now, so people’s faces pop off darker backgrounds, which allowed us to lean into using candlelight a lot during the episode.”

The black-and-white format also affected how Kate Siegel approached acting in the episode. “I had to rely a lot more on watching back what we had just shot between takes,” Siegel said. “Because they had these big, wide lenses, but they were doing closeups on them, rather the lens you typically shoot closeups with, your performance looks different. What James and Axelle [Carolyn, the episode’s director] did created distortion at the edges of the frame that makes everything feel kind of creepy and a little bit off-balance. I used that to make my performance feel even creepier and a little bit more Gothic.”

Siegel’s Viola is what really sells the episode. We knew her from the very first episode as “The Lady of the Lake,” the spectral villain looming large over the manor, killing at least one character on-screen before episode 8. In “The Romance of Certain Old Clothes” the show pulls back the curtain to reveal the tragic story of Viola, a woman trying to keep her home intact in a world that cares little for her for being a woman. Rather than translating the original story’s love-triangle, Bly Manor turns Viola’s story into a love story between two sisters, and how that changes when one of them becomes a mother. “When [Viola’s daughter] shows up, Viola starts turning her back on her sister, and their love is broken apart,” Siegel said. “Her daughter becomes the trust love of Viola’s life.”

The title of the episode, and James’ story, comes from Viola’s most precious possession—her vast collection of beautiful and expensive dresses. She has them all locked away once she gets sick with tuberculosis, allowing only her daughter to have access to them once Viola dies. In both the story and Bly Manor, the dresses are used as a visual representation of the restrains Viola has on herself, first from society tying her down because of her gender, and later to showcase how Viola’s strong will is fighting against the constrain of the disease that’s slowly killing her. “The thing that really helped me fall into the time period was the clothing and the corset,” Siegel said when mentioning the many wardrobe changes Viola goes through in the episode. “I had a wonderful woman named Dawn whose job was to get me into those gowns, all of which were handmade from scratch by our incredible costume teams. And I would just tell Dawn ‘lace me tighter, tighter, tighter, so that Viola felt that constriction, like she just wanted to break out. I wanted that energy and for Viola to feel like she was just about to explode all the time.”

And Viola does explode, in a way. Once she dies from the disease, she remains in the manor as a ghost, and her memories and features start to slowly fade away as the memory of her fades away from her family’s mind. As Carla Gugino’s narrator explains that “all things fade” from stone, stars, to the spirit, Viola is reduced to “sleeping, waking, walking” around the manor, taking more and more souls with her as time passed. Despite Viola’s monstrous actions, the episode is not entirely without sympathy for her. “What I wanted to do was mostly focus on the other side of it, because I think what makes Viola’s horrifying actions heartbreaking is that she’s just looking for her daughter,” Siegel adds.

“That’s all she’s doing, and Bly is all about making you look under the surface of the characters and realize that monsters are complicated, people are complicated, evil is complicated. Misery loves company and Viola found herself surrounded more and more with ghosts, and creating more ghosts. It’s that push and pull between abandonment and intimacy, being utterly alone in the lake, and bringing more people in. Most people believe that they’re the hero of their story, and I think Viola did as well. She would say that she did everything she could to keep her family together, and save the house she grew up in. And she also spent eternity looking for her daughter. For me that’s heroic, yet her actions are villainous.”

The lake is featured heavily in this episode, the place Viola’s restless soul lies in, and the place she returns to every time she goes out to look for her daughter. It was also a difficult problem to solve for the production. “We shot the scenes where she walks into the Lake at a real lake we build out in a farm outside of Vancouver,” James Kniest explained. “And we shot in the dead of winter, at night. And we had to deal with a lot of steam because we had to heat the lake for the actors, for SAG rules, to 80 degrees. But it’s still below zero outside, so that was a bit challenging because of all the steam, yet I think it really lends itself to this spooky, moody vibe, especially in black-and-white.”

Though the Lady of the Lake is seen for most of the show, Kate Siegel isn’t behind the makeup most of the time. “A lot of that was done by a wonderful stunt performer named Daniela Dib, because I had a young baby at home so I could not fly to Vancouver and haunt people in the middle of the night,” Siegel explained. “The way Viola’s ghost was done was in two ways. One was through post, using special effects. The other is a silicone mask with the eyes cut out, a slit for the mouth, and two little holes for the nose, which then has the effects added. It was very creepy.” 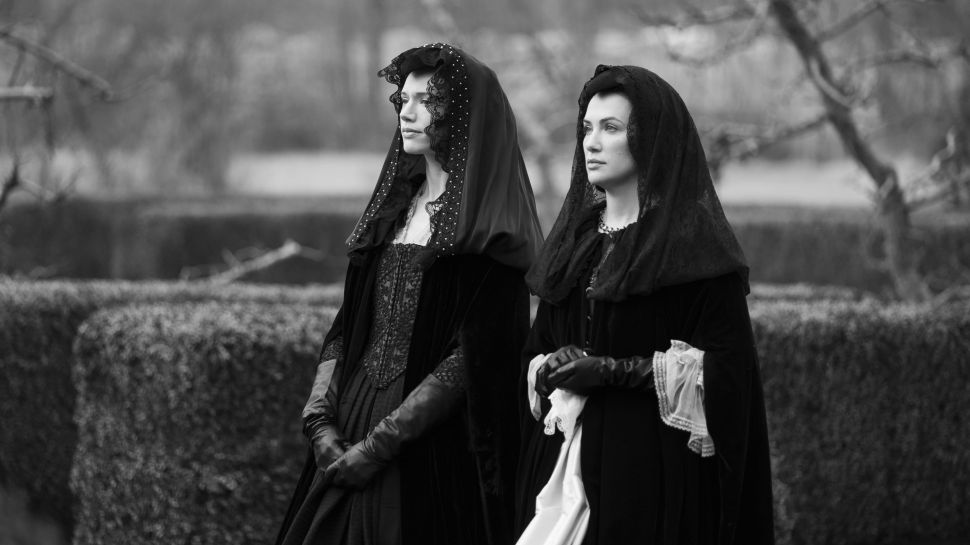