Two weeks and four score years ago, a pair of old white men held what was supposed to be a debate but instead became repulsively bad “political theater,” a nationwide facepalm. Starting Friday, Amazon Prime Video streams an actual work of political theater that includes a structured, substantive debate. Resolved: We should abolish the Constitution of the United States (for being racist, misogynist and otherwise un-democratic). A Broadway show puts the presidential race to shame—admittedly, it’s a low bar.

This should come as no surprise: Heidi Schreck’s fiercely urgent and soul-restoring What the Constitution Means to Me keeps uncannily in step with the times. Initially framed as a semi-solo memory play (the sly Mike Iveson assists from the side), Schreck recounts a teenage stint debating Constitutional values at American Legion halls across the country to raise college tuition. From there, the script goes wide and deep, as wry nostalgia decays and Schreck dissects the ways amendments have or have not enlarged civil rights for women and minorities, and how conservative interpreters (such as Justice Antonin Scalia) clawed back protections for society’s most vulnerable. Schreck also shares a tragic (but resilient) family history, in which generations of female relatives survived abuse to give safer lives to their children. Those who saw Constitution on Broadway know that twists are coming: Memory morphs into polemic and then enfolds the audience in a utopian microcosm of democracy.

Besides being funny, informative, and heartrending, Schreck’s piece shadows current events. When I interviewed her two years ago, Brett Kavanaugh’s confirmation hearings were underway. An accused sexual predator and opponent of abortion rights was being flagrantly rubber-stamped by the Republican-dominated Senate. We had stuff to talk about. Constitution transferred from Off Broadway’s New York Theatre Workshop to Second Stage’s Hayes Theater on Broadway and ran for 183 performances during the serial Constitutional clusterfucks of the Trump Administration. And now we’re here. RBG is dead, and if it’s the last thing he does, Mitch McConnell will fast-track an unqualified fundamentalist zealot to help overturn Roe v. Wade. Amy Coney Barrett’s hearings are happening right now and the material Schreck developed over a decade, which Marielle Heller filmed for broadcast last year, is still ahead of the curve.

It’s joins a coterie of politically clear-eyed dramas with super-relevance, the gift of persistent prophecy. Wallace Shawn’s totalitarian morality fable The Designated Mourner (1996) was shockingly apt after September 11, and it’s even more barbed now; Caryl Churchill’s surreal dystopian shocker Far Away (2000) will only seem dated the day after Apocalypse; and when Tony Kushner’s Angels in America was revived on Broadway in 2018, we were all freshly reminded that its chief villain, Roy Cohn, was Trump’s mentor. When an infected Trump was rushed to Walter Reed for experimental drugs, the blurring of art and reality was unbearable: fictional Cohn mapping to historical Trump. When daylight narrows to nothing between theater and politics like this, who needs Shakespeare and the Greeks anymore? We’ve got Belize.

What the Constitution Means to Me is a shorter, more personal work than Angels or Mourner, but packs just as staggering a punch. In this effortlessly organic yet finely choreographed diorama-demonstration (impeccably staged by Oliver Butler), we are asked to face a society in which women are raped, beaten and murdered—by partners—in numbers that dwarf wars and pandemics. How does our country, which has become fairer in many ways, continue to dehumanize women and minorities? Just as the Electoral College was an antiquated check on a 2016 popular vote that might have spared us the present horror/farce, Schreck documents how the Constitution is weaponized, generation after generation, to deny “positive rights” to all.

Like a TED Talk that really teaches or stand-up with healthy laughs, Heller’s film is fresh, buoyant and living, cutting to audience members cracking up or wiping away tears and to neat, metonymic flourishes. When Schreck talks about “penumbra,” the judicial concept of implicit rights, the director cuts to a rear shot of the actor in her bright, mustard blazer facing a shadowy void. Rachel Hauck’s set, a Platonic Legionnaire hall gridded with photographs of men, frames, estranges, and provides a second, mute audience for Schreck’s energizing discourse.

If you want more than escapism yet need a break from the news, get you to Heidi’s place. The tears you shed will flow happily, and this radiant, angry, persevering woman will renew the fight in you. We have so far to go, but we travel together. (And young surprise guests will make you optimistic for the future.)

Whether Barrett gets the robe or Trump the boot, it will be the fate of What The Constitution Means to Me to remain relevant in five years, ten years, goddess help us, more. We may wish this an inflection point in American politics; we’ve gone to the bottom with Trump, the pandemic, anti-Black pathology, and can only swim up. But racism, misogyny, and religious hypocrisy forever replenish themselves across our land; it’s the poison well that never runs dry. There will always be a massive bloc of citizens whose lives are improved by science, universal civil rights, and corporate regulation, who still reject those very same things. People vote against their interests then rage irrationally at status quo. Perhaps Heidi could change their minds. But let’s be honest: A couple million may click on Amazon Prime Video and cheer, while millions more will fire up Fox News, where the debate has already been lost. 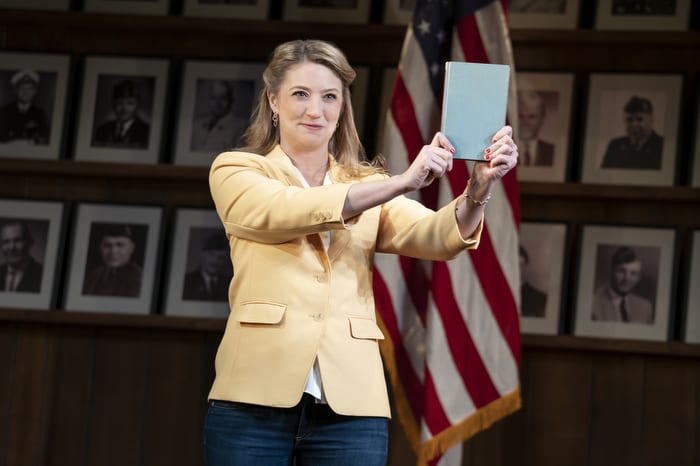 Filed Under: Arts, Theater, Broadway, Amazon Prime Video, Heidi Schreck, What the Constitution Means to Me