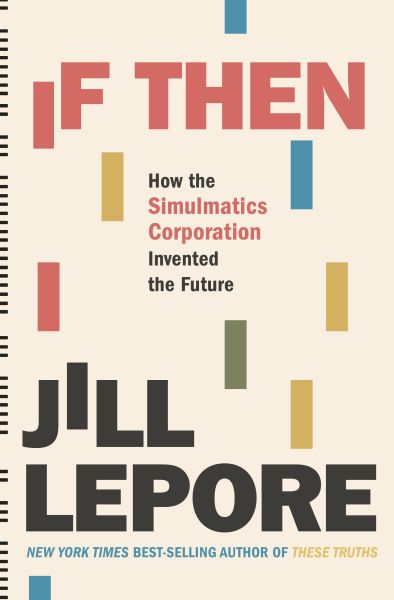 If Then by Jill Lepore. WW Norton

In the final weeks leading up the presidential election, one tendency would be to avoid all media related to politics. While older generations enjoyed morning and evening papers or television network news, today’s preferred information platforms such as Twitter and Facebook inherently overwhelm the user with an excess of content that drives one to addiction or retreat. Is it possible to develop an ability to digest the news with some distance?

Having found myself reaching news saturation recently, I picked up Jill Lepore’s National Book Award longlisted nonfiction book If Then to think around these issues without submitting myself to constant news alerts. The book concentrates on the origins and impact of Simulmatics Corporation, a long forgotten company. Founded in 1959, Simulmatics was the brainchild of a flimflam man named Ed Greenfield whose false academic pedigree would have been sniffed out in minutes today. A white liberal, Greenfield hoped to bring his dream of a “people machine” to aid presidential politics. This was the time of bigger and better computer engineering as well as emerging fields of behavioral science.

Greenfield was an ideas man and needed others to execute his vision. He found a partner in a political scientist named Ithiel de Sola Pool. Together they embarked upon work that began with a successful involvement with John F. Kennedy’s 1960 presidential campaign and ended in Saigon with a doomed project aiding the American Department of Defense. Drawing from collected data, they utilized computer programming in order to predict outcomes based on “if then” questions. Take a look at social networking sites as well as Amazon, Google, or Cambridge Analytica and you’ll find their original blueprints in Simulmatics. For a company that only existed for just over a decade, what it set into motion by harnessing rapidly evolving technology and a commitment to nascent behavioral science was profound.

But it begs the question, how did Lepore connect the dots? In correspondence with the Observer via email, Lepore notes, “Most of the books I’ve written began in an archive. I find something, and then I get curious, so I look some more, and then I feel a strange compulsion to write about what I’ve found.” Her curiosity has led to books on the history of Wonder Woman, Benjamin Franklin’s sister Jane Franklin, as well as a study of slavery in 18th century Manhattan. “This book began in the Ithiel de Sola Pool Papers at MIT. The collection is about two hundred boxes, mostly unprocessed, which is both a pain (because it’s hard to find things in an unprocessed collection) and fun (because when you find stuff you can be pretty sure no one else has found them before you).”

This enthusiasm for detail and discovery is what transforms material that some would have considered dry fact into a vibrant narrative. Personal lives surface, certainly, but it’s more that Lepore has a steady sense of when to bring in cultural anchors such as Eugene Burdick, the political scientist who became a bestselling novelist, in addition to the domestic disputes such as the unstable marriages that plagued the company men.

And it was largely men who dominated this field. Over the course of reading the book, the lack of women in the proverbial room became uncomfortable and then claustrophobic. One could say this was another time, but it doesn’t take away from the fact that behavioral science came into popularity during a time in which, culturally speaking, working women were discouraged to do more than execute programming tasks or serve as secretaries. 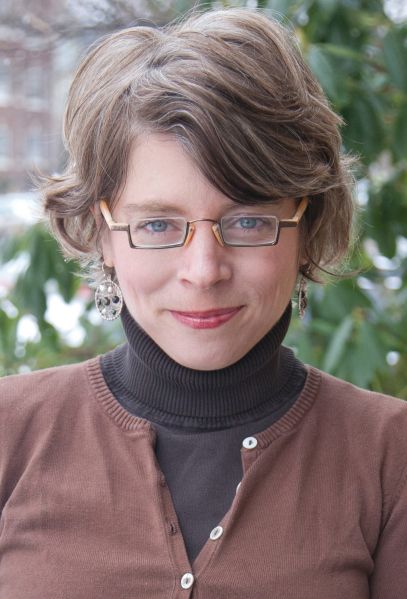 Lepore interestingly considers the wife of Bill McPhee, a mathematical sociologist recruited by Greenfield to work on a computer that would simulate voting behavior. Minnow Emery McPhee came from a family of accomplished women. Her mother attended Bryn Mawr College and her aunt was a professor of childhood development. Marriage to Bill derailed Minnow’s hopes of pursuing a career similar to her aunt. After mentioning another data collector, Betty Friedan, whose landmark book The Feminine Mystique originated in a set of interviews conducted with her Smith College classmates, Lepore notes that Minnow McPhee was all too aware of the crisis Friedan observed. However, Lepore goes further, stating in the book, “There was a bigger problem, too. And it didn’t have a name either. It had to do with knowledge itself. In the 1950s, when women’s work was not work, women’s knowledge was not knowledge. This had a disastrous effect on the two new fields of knowledge that this era produced: behavioral science and artificial intelligence.”

It’s unsurprising that these fields excluded women from the start, but it speaks to the ingrained arrogance that dominates the tech industry today. With great subtlety, Lepore raises these issues in the book with direct, but not incendiary, intention. Again, her commitment to archival work proves important. “I was so grateful to have access to an incredibly rich archive of Minnow McPhee’s letters, which her granddaughter has lovingly collected and transcribed and annotated,” she told Observer. “It was just incredible. So often it’s so difficult to tell those domestic stories.” It would be far too easy to let these histories slide into the melodrama of Mad Men. Lepore’s tight grip of pacing keeps these narratives tethered to the themes and actions at the center of the book.

She continues, “I was also able to interview many of the children of the Simulmatics scientists, which was wonderful. [But it was] Minnow McPhee’s correspondence, in particular, that allowed me to help the reader gain a view of this world as it was lived by women and children, not as it was imagined by behavioral and computer scientists. The very sad and troubling irony [is that] these men were trying to build machines and create an artificial intelligence to understand and predict human behavior when they were ignoring and failing to understand their wives and children.” When asked if she felt this exclusion continues today, Lepore affirms, “Yes, it’s absolutely, entirely still with us.”

Not only does Lepore touch upon the exclusion of women from workspaces, she also explores the ways in which this emerging technology crossed paths with the civil rights movement and anti-war movements of the moment. Desperate to keep his company afloat, Greenfield and Pool took Simulmatics to Vietnam in an equally doomed effort to read and then change the hearts and minds of the Vietnamese. This association with the American Department of Defense haunted Pool for the remainder of his career, despite his oracle work predicting the rise of social networks and the role of the Internet. These flawed men clung to emotional blind spots that prevented their operation from adapting in a way that would offer a more complete study of the subjects they hoped to fully understand.

At the close of the book, Lepore quotes the Google and Uber car designer Anthony Levandowski who in 2018 discredits the study of history. “What already happened doesn’t matter,” he says dismissively. “You don’t need to know history to build on what they made. In technology, all that matters is tomorrow.” Like any good historian, Lepore smells the lie in that statement and adds, “The invention of the future has a history, decades old, dilapidated. Simulmatics is a cautionary tale, a timeworn fable, a story of yesterday. Because tomorrow is not all that matters.”

It’s reassuring to see Lepore’s context, but so is the manner in which she exposes the bloated words of snake oil salesmen such as this. When asked if Lepore felt that the industry would become subject to government regulation, she responded, “Oh yes, regulation of this industry and even dismantlement of many of these companies is inevitable. It’ll take time. But it will happen.” If Then is an unnerving book that chronicles the birth of modern media and data manipulation. This prescient book is a warning for emerging behavioral studies and big technology. Lepore underscores the fact that history keeps the score. 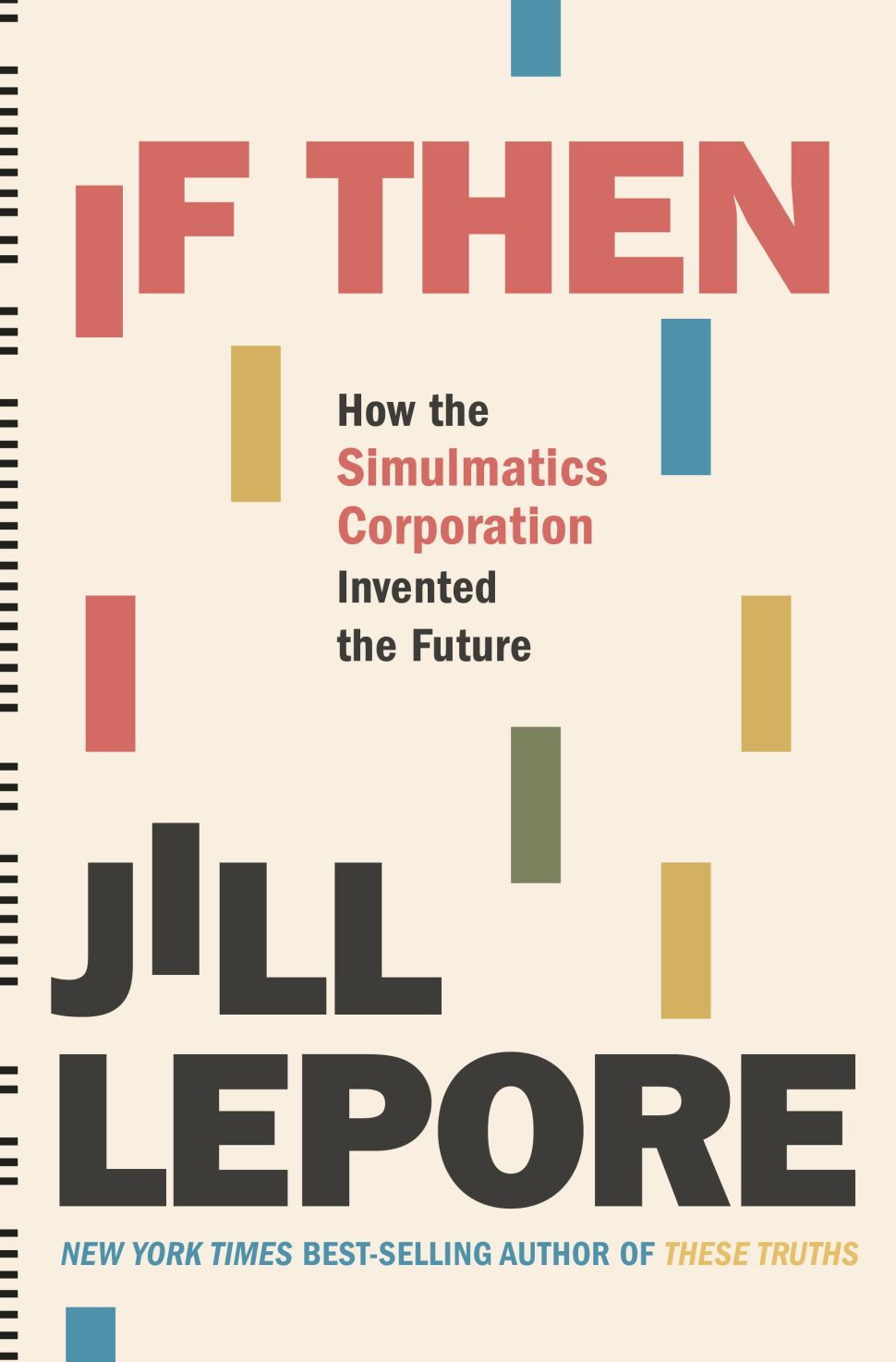 Filed Under: Arts, Books, Jill Lepore, If Then, Simulmatics Corporation