What lies between the leading man and the character actor? In an effort to exert a meaningless modicum of control over the subjective world of art, we have long classified thespians into one of these categories. But these binary distinctions have never been expansive enough to cover the breadth of permutations a modern actor’s career can take. Joseph Gordon-Levitt’s unusually busy 2020 is an example of how a performer can defy these simplistic evaluations.

Enter Aaron Sorkin’s The Trial of the Chicago 7, which recently debuted on Netflix and positions Gordon-Levitt, who plays attorney-with-a-conscience Richard Shultz, as one of many talented cast members in a throwback ensemble drama.

The Oscars hopeful arrives on the heels of Gordon-Levitt’s less heralded summer Netflix movie Project Power, a popular original superhero story in which his NFL-jersey-wearing New Orleans cop plays second fiddle to whatever Jamie Foxx’s character is up to. Rounding out the year is 7500, an Amazon original where Gordon-Levitt plays an airline co-pilot attempting to bar access into the cockpit from three high-jackers who have taken his flight attendant girlfriend, who is also the mother to his young son, hostage.

The actor’s eclectic return to the screen underscores one of Gordon-Levitt’s defining characteristics: he never seems out of place. Gordon-Levitt, who isn’t quite a full-fledged leading man nor as esoteric as familiar character actors like Bill Camp, Toby Jones or Richard Jenkins, has always enjoyed the elasticity to seamlessly fit into every project.

In the midst of his run on sitcom 3rd Rock From the Sun, JGL leapt to the big screen with the now classic 10 Things I Hate About You. The actor’s self-admitted disdain for the romcom genre at the time is nowhere to be found in his performance as good-natured geek Cameron. His baby-faced boyishness sets himself apart from the in-film rival Joey, bathing him in a teenaged glow. It’s all in the raised eyebrows and sheepish smile that makes his relatable coming-of-age underdog so perfectly suited for the film.

But this cheery, fresh faced can-do-it optimist was far from the characters that truly spoke to the young actor. His mid-2000s work is where his star would begin to rise and where his career focus would take shape.

Rian Johnson’s Brick was perhaps the most important reintroduction of the former child star to the film industry. Would hard-boiled neo-noir dialogue even work in the era of jaded cynicism that began to emerge 15 years ago? What’s more, does it work coming from a character in high school?

Yes, because in Brick, Gordon-Levitt—tattered, lanky and exhausted—had somehow mastered a youthful world-worn-weariness. An old soul perpetually exhausted with the state of things, Gordon-Levitt’s Brendan is a high school sleuth brought to life by the actor’s minimalism. It’s in his lack of affectation that the character comes alive. Brendan is a keen observer intentionally on the outside of the social hierarchy, an arm’s length of yearning that fortifies the walls he builds around his vulnerability. It’s through his stillness that we realize how stormy the seas are beneath. Whether it’s in his unmoving reaction to finding his girlfriend’s dead body or the casual sweep of his moppy-haired brow, Brendan emits a concerted restraint to keep from unspooling completely.

Twisted another way, it becomes Chris Pratt (the character, not the actor) in 2007’s The Lookout. Audiences can feel his emotion through the great lengths he goes to to contain it within his sinewy frame. What can easily become unintentional parody as he plays a former high school star athlete who suffers brain damage in a car accident instead calcifies into authentic trauma. The longer hair, the averted eye contact, the sense of buffering his character with a brain injury works through. In his mid-20s, Gordon-Levitt applied unconventional tactics to relatively traditional leading man roles, playing them as individuals rather than archetypes.

You can feel Chris’s palpable desire for normalcy and acceptance in the slight tic of nervousness around the corners of his eyes and mouth. The awkward attempts at flirting mixed with the zoned out expression render him believable as something more than just another jerk striking out at the bar.

The Lookout is not a perfect film, but what’s notable about these early roles is that Gordon-Levitt’s performances rarely feel like the weakness in his weaker films. He seemingly never had the trouble finding his footing the way a contemporary like the older Leonardo DiCaprio could occasionally feel out of place in early leading roles such as Basketball Diaries or Romeo + Juliet. Gordon-Levitt came of age in the social media era in which our every move is curated and broadcast to the world. Yet his early defining characters—intelligent onlookers with cool, calculating outward facades—see emotions as valuable internal pieces worth keeping private. He’s not empty; he’s so full that he’s worried we’ll notice.

Tom Hansen in 500 Days of the Summer (a return to the romcom genre) is almost the inversion of 10 Things I Hate About You‘s Cameron. Though well-intentioned, Tom never truly listens to what Summer (Zooey Deschanel) is telling him at every stage of their relationship. The film’s dream-like quality mirrors the character’s mindset as he plunges forward, believing his own desires and perceptions supersede her own. Tom isn’t a bad guy, but he has a lot of growing to do as a person. The way Gordon-Levitt paints him lost in fantasy with blinders of love blocking his field of vision exemplifies this throughout the film.

If the actor’s mid-career was defined by the realism he brought to grounded and familiar characters, the last decade has seen him adapt his on-screen presence to fit the outsized world of action blockbusters. From 2010 to 2012 he would star in Inception, The Dark Knight Rises and Looper. In Inception, he once again uses that lanky bow-tie wearing frame to his advantage as the appropriately rigid exposition-deliverer in Arthur. Arthur’s sole purpose is to act as a guide for the audience through the rules of Christopher Nolan’s dream world. He’s talking directly to the viewer, a less glamorous but necessary role the actor commits to, with a dash of topsy-turvy derring-do.

In The Dark Knight Rises, he slots in comfortably as a supporting player just off center from the primary heroics. He’s believable as a stout everyman who finds himself in extraordinary circumstances, an expression of muted consternation permanently plastered across his face. Not quite a character actor yet still a rung below the lead. This dynamic pays off when Gordon-Levitt’s Blake confronts Bruce Wayne about Gotham’s need for Batman to return. It’s an emotionally revealing moment that Gordon-Levitt plays well as matter-of-fact and only works because it’s coming from an everyman like his Blake.

In Looper, he goes the other way. The prosthetics that make him resemble Bruce Willis aren’t distracting because there’s a careless swagger to Joe borne out of self-preservation. They say youth is wasted on the young—an adage directly applicable here. JGL’s Joe is steadfast yet occasionally reluctant; selfish yet capable of growth. There’s more of an angry edge to Joe than the actor’s previous lead roles.

As Gordon-Levitt has aged, he has continued to select specific characters that mirror his journey. In The Trial of the Chicago 7, he provides the film’s opposition with a reluctantly growing moral center befitting of an adult coming into their own. These are roles that, consciously or not, reflect the boyishness of his face through the more seasoned look of a 39-year-old actor. He knows how to style himself up or down as each role requires and use his frame to either protect or project the internals of his characters. He may not be an perennial Oscar-contending, box-office busting movie star (at least, not yet), nor is he the unknowable character actor destined to the periphery. He’s something in between, capable of slotting into a 1960s period piece or a sci-fi thriller set in the distant future. As such, he’s never out of place. 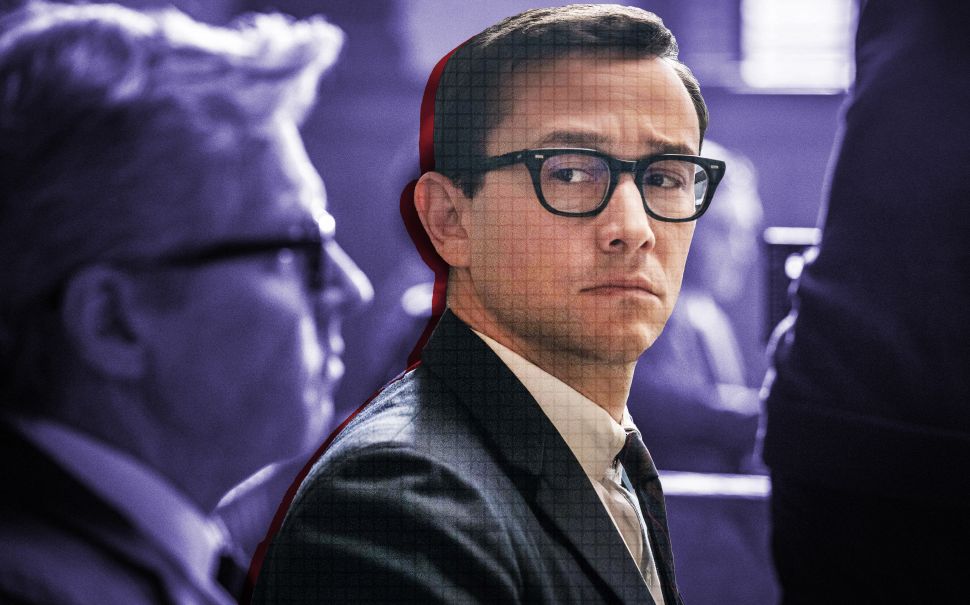